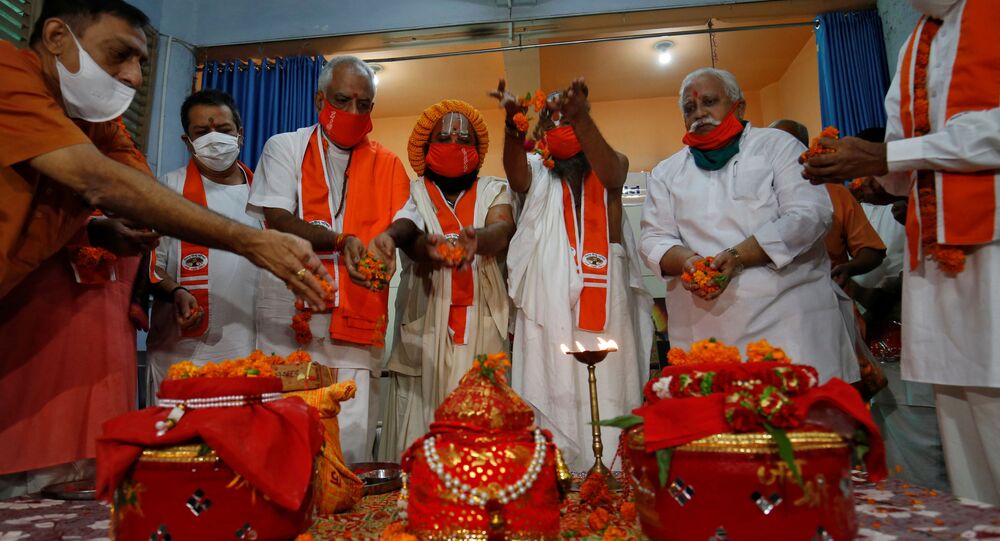 New Delhi (Sputnik): Indian Prime Minister Narendra Modi will perform the groundbreaking ceremony for the iconic Ram Temple in Ayodhya on Wednesday (5 August). A grand temple of Lord Ram, believed to be at his place of birth, has been at the top of the agenda of several national Hindu organisations and the federal Bharatiya Janata Party (BJP).

The rituals preceding the foundation-laying ceremony for the Ram Temple began in Ayodhya in the Indian state of Uttar Pradesh on Monday morning. The "Gauri Ganesh Puja" or invocation of the elephant-headed god Lord Ganesh is customary when beginning any solemn function for Hindus.

The three-day rituals will culminate in the groundbreaking to be performed by Prime Minister Narendra Modi on Wednesday (5 August).

Meanwhile, top Uttar Pradesh officials have reviewed the security arrangements in Ayodhya ahead of the PM's visit. Modi’s first stopover will be at a temple dedicated to Hanuman, the monkey-god, believed to be a companion of Lord Ram.

#Rituals to the run up of Groundbreaking for #RamTemple begin in #Ayodhya. Prime Minister @narendramodi would perform the groundbreaking on 5 August. pic.twitter.com/0HZ27UfEBM

​The groundbreaking will also be the culmination of a dispute between Hindus and Muslims that has lasted almost two centuries. Hindus claim Mughal ruler Babur demolished the Ram Temple and constructed a mosque there.

Hindu zealots razed to the ground a 16th century mosque on 6 December 1992, sparking one of the worst communal riots in India post-independence.

The dispute, considered to be the longest litigation in the country, lingered in various courts since 1950 until it came to the Supreme Court of India in 2011. The apex court delivered its judgement in November 2019 handing over ownership of the disputed land to Hindus, while ordering a suitable plot of land for Muslims to construct a mosque.

The Supreme Court of India also ordered that a trust to manage the construction of Ram Temple in Ayodhya be set up. The federal government, accordingly, constituted a trust in February, 2020 called the Shri Ram Janmabhoomi Teerth Ksehtra Trust, which initiated the construction of the temple.

Ornately carved stones are stacked up on the ground on the premises, which are in “ready-to-move blocks” that can be easily assembled in the temple, according to the design.