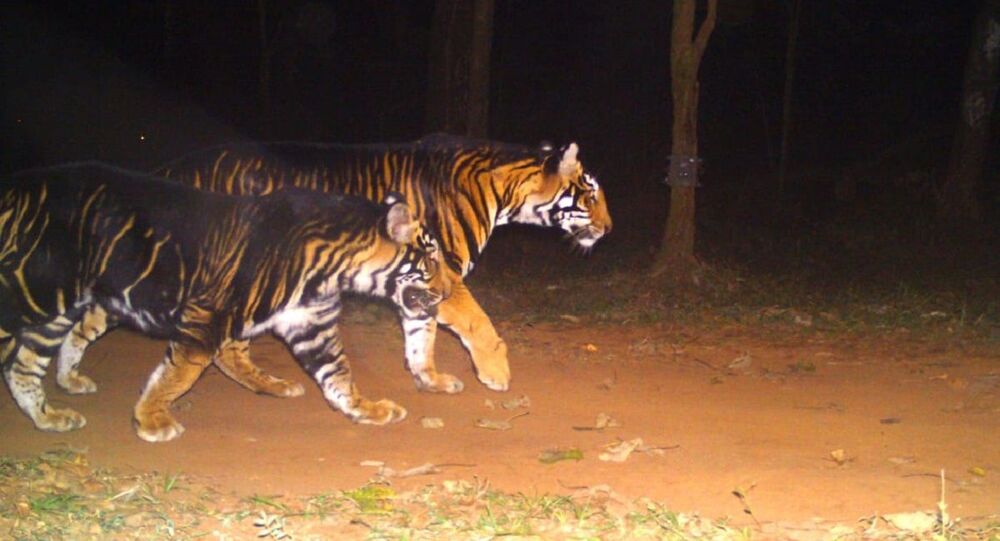 New Delhi (Sputnik): Indians went gaga over flattering pictures of a black panther named 'Saya' (Shadow) - the only Melanistic leopard in India's Kabini wildlife sanctuary - taken by a photographer who spent five years capturing the exotic animal on camera. But India is also the only home to the exquisite melanistic tiger.

It seems like the wild creatures from Rudyard Kipling's novels are coming back to life. Mowgli, the protagonist in Kipling's 'The Jungle Book' stories, is a fictional orphaned boy who is raised among wild animals in what's now India's Pench National Park in the state of Madhya Pradesh.

After the black panther named 'Saya' was widely compared to 'Bagheera', a melanistic leopard in the animation series, people are now amazed by the pictures of rare melanistic tigers found only in India's Simlipal Tiger Reserve, located in the coastal state of Odisha.

It's no wonder that the wild beauty with pitch black and unusually broad stripes is being widely referred to as 'Shere Khan' (the tiger king), a character in Kipling's made even more famous by Disney and Soviet cartoon adaptations. Seeing both the species is a rare treat.

With tales of 'Bagheera', all around, recorded in at least 9 States of India including Odisha, thought fit to present 'The Shere Khan', the real black beauty with broad black stripes, of Simlipal Tiger Reserve; the only habitat of the world to harbour melanstic tiger ...... pic.twitter.com/WK5XqNyG3O

​The 'Shere Khan' has stripes that are broader and thicker than those of normal tigers. 'Melanistic' is a phenomenon characterised by excessive black pigments in animals.

The pictures of of the broad black-striped tigers have left animal lovers on the internet spellbound. While some said that they weren't aware there were any tigers left in the reserve, others were simply happy to learn something new.

Explaining the phenomenon behind the colour, Indian Forest Services Officer Sandeep Tripathi told Sputnik, "It's mutation or genetic change. The background colour of the tiger's body is controlled by a set of agouti genes & their alleles, whereas the Tabby genes & its alleles control stripes. The absence or presence of another third types of genes for skin colour actually leads to this."

Wow. Thank you for posting @sandeepifs. I learned something new today.

Cool. Thought there were no tigers left in shimlipal.

​Experts pin the increasing trend of melanistic tigers on genetic mutation and inbreeding. More tigers in the sanctuary are now giving birth black or melanistic breeds that are drawling attention worldwide.

The first melanistic tigers was spotted in the Simlipal Tiger Reserve in 2007 with the help of camera traps placed by researchers from the Wildlife Institute of India.

As per the latest census conducted by the Odisha forest department, there are six to seven melanistic tigers among the 29 tigers living in the reserve, including cubs.