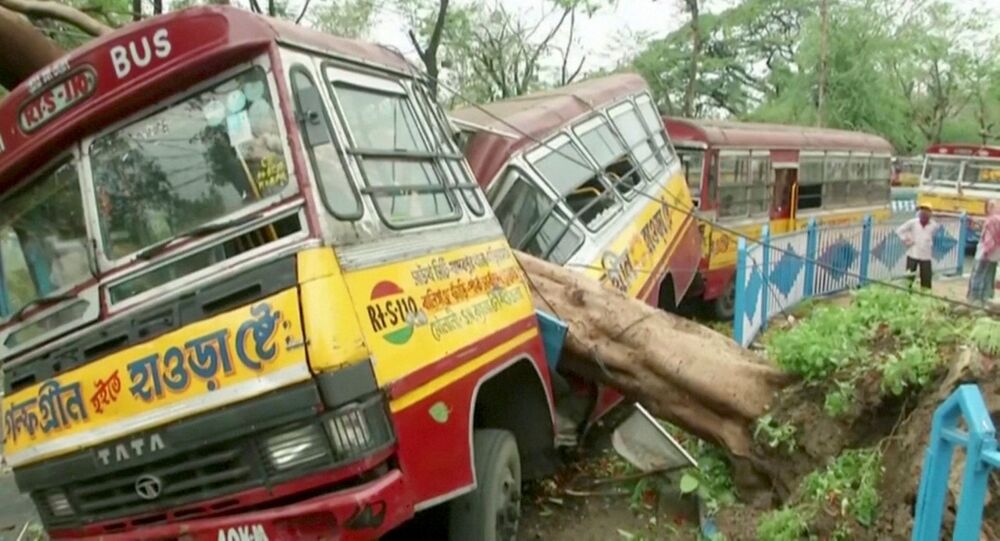 Caught Between Corona and a Cyclone: Megastorm Mangles Coast of West Bengal

New Delhi (Sputnik): The super cyclone Amphan hit the coastal districts of India’s eastern Odisha and West Bengal states on Wednesday and Thursday (20-21 May). The hurricane-force 160-180 kilometre-per-hour winds ripped six districts of West Bengal, killing 72, but only had a minor impact on neighbouring Odisha.

The homes of around 500,000 people in the state of West Bengal in eastern India were in the path of an incoming super cyclone – Amphan. It was billed as the worst since the 1999 Super Cyclone that hit Odisha, but advance warnings about the cyclone issued by India’s meteorological department helped save thousands of lives.

One of the worst-hit areas was the UNESCO-declared World Heritage Site of Sunderbans – a mangrove area in the delta formed by the confluence of three rivers, two in India, the Ganges and the Brahmaputra and one in Bangladesh, the Meghna.

The super cyclone Amphan made its landfall near Sunderbans on Wednesday, 20 May, and devastated almost all the 54 inhabited islands. The villagers, whose livelihood depends on fishing and farming, had already been shifted to safer places and relief camps. But most of the temporary and semi-permanent shelters were blown away or damaged in the cyclonic wind. River embankments were also breached and saline water from sea entered the villages and drinking water sources. Standing paddy crops were also washed away by the hundreds of hectares by the gale and downpour.

“Almost all the dwellings were blown away or damaged. The villagers have already had no work during the last two months of lockdown. There are close to 5 million people living in the 54 inhabited islands, while 48 in Sundarbans are forested. Their standing paddy crops were also completely flattened by the heavy wind and rains,” Loqman Molla, a local from the South 24 Pargana district of West Bengal told Sputnik. The Sunderbans region is split into two districts: South 24 Pargana and North 24 Pargana .

“The inhabitants have no alternative livelihoods now, no place to go. Most of them are very poor people, with a hand to mouth livelihood,” explained Molla.

Molla said roads are blocked by uprooted trees and electric poles, with all communication links breached. He said that as of now, there is no information about the loss of wildlife on the 48 forested islands in Sunderbans, which is known for its tigers, leopards, rhinoceros, wild buffaloes and several species of deer.

“No power since Wednesday early morning (they had switched off early as they were possibly working on a high tension line here), no water. Getting water from a nearby pond and deep tubewell for essential purposes, as even bottled water is not available for purchase,” said Dwijit GuhaSarkar, a scientist staying in Rajpur-Sonarpur Municipality in the South 24 Parganas district.

“Most houses in our area had some damage, to varying extents. Ours had some minor damage, like glass windows broken, one tin shade flying off, one old wooden window broken,” added GuhaSarkar.  He said there is no transport and supplies are very limited due to the ongoing lockdown. It may take up to a week or so to get back the power and telecommunication links.

Kolkata, the biggest city in eastern India and capital of West Bengal, was also hit. Several roads in the city were blocked by uprooted trees or electric poles. The international airport in the city was flooded on Thursday and several semi-permanent structures which serve as the offices of India’s national carrier Air India were severely damaged.

“In Kolkata, the situation is horrible. There are quite a good number of localities where there has been no power supply since the evening of the 20th, and it is not clear when it will be restored.  Water scarcity has resulted due to the power crisis. Moreover, the only respite during this lockdown period, the internet, has also been missing since the evening of the 20th following the deadly attack of Amphen,” said Partha Ghosh, a journalist.

Meanwhile, India’s federal disaster relief force has deployed its personnel across the worst-hit areas, clearing the roads and restoring public facilities on a war footing.

​State Chief Mamata Banerjee on Thursday (21 May) termed the devastation “beyond our thoughts.”

Cyclone #Amphan has left a trail of devastation beyond our thoughts. While the material damage is substantial, Bengal stands united in this time of crisis. Together we will overcome this because nothing can dampen the spirit and strength of the people of Bengal.

​Banerjee had earlier suggested the total loss in the state due to the cyclone to the tune of US$13 billion.

West Bengal, like other states of the country remains in the grip of COVID-19, with a caseload of 3,197, which includes 1,193 people who have recovered and 259 deaths. At the national level, according to data released by the federal Health Ministry on Friday, the cumulative caseload was 118,447, including 48,534 recoveries and 3,5,83 deaths.