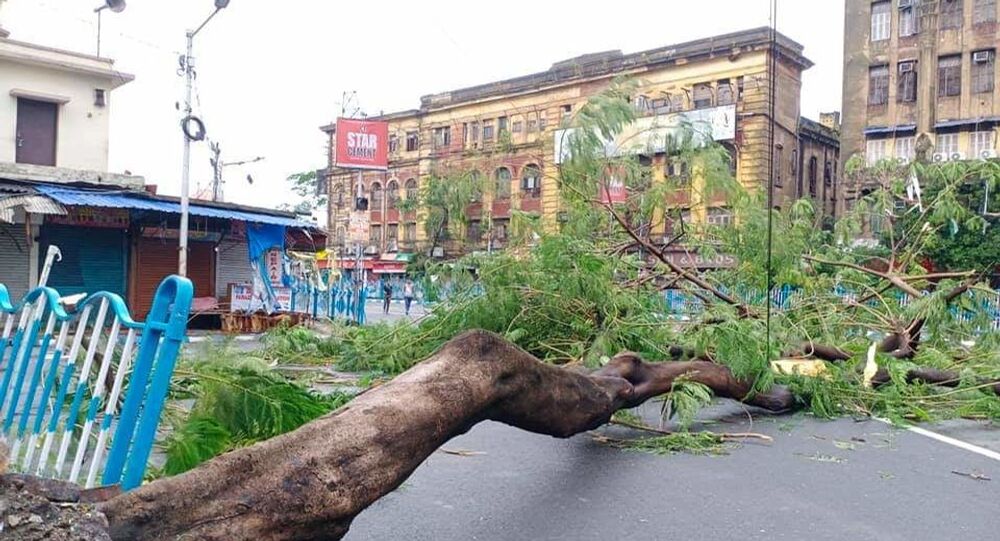 New Delhi (Sputnik): Cyclone 'Amphan', the second super cyclone to be formed in Bay of Bengal since 1999, made landfall in India on Wednesday and ravaged the Indian states of Odisha and West Bengal, leaving behind a trail of destruction with loss of life and property.

Indian Prime Minister Narendra Modi left Delhi on Friday to take stock of the situation in the Cyclone Amphan-hit states of West Bengal and Odisha through an aerial survey, which would be followed by review meetings later in the day.

Prime Minister Narendra Modi leaves from Delhi for West Bengal to take stock of the situation in the wake of #CycloneAmphan. He will conduct aerial surveys and take part in review meetings later today. PM Modi will also visit Odisha later today. pic.twitter.com/J6GC7vrMJP

​This comes as the disaster relief teams have yet to assess the scale of damage. Government sources told Sputnik that although an initial disaster assessment report often comes within 24 hours, due to the wide scale of the destruction, the initial estimate will take at least 3-4 days.

This is Modi’s first visit outside Delhi since March 25, when the nationwide lockdown was imposed. Starting from West Bengal, the Prime Minister will conduct an aerial survey along with West Bengal Chief Minister Mamata Banerjee.

NDRF teams are working in the cyclone-affected areas. Top officials are closely monitoring the situation and also working in close coordination with the West Bengal government.

No stone will be left unturned in helping the affected.

​The Super cyclone that made landfall in India's West Bengal led to the death of 72 people, who were usually electrocuted or killed by falling trees. The state's leader estimated the total loss at $13 billion.

Nearly 500,000 people are said to be in relief camps in West Bengal. A relief package of $133 million for restoration work has also been announced by the state's chief minister.

The damage was comparatively less severe in the coastal state Odisha. Three deaths, including that of a 2-month-old girl, were reported from the state where nearly 100,000 people were evacuated to safety as a precaution. The deaths were the result of electrocution and collapsing houses.

Meanwhile, India’s federal Meteorological Department had said on Thursday that the cyclone is now over Bangladesh, but has weakened.