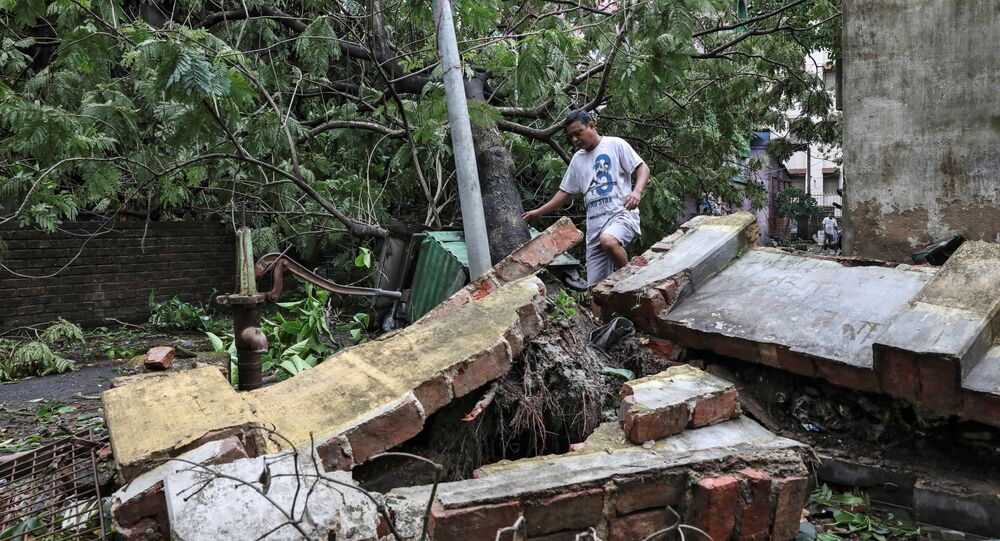 New Delhi (Sputnik): Thousands of houses were destroyed and many more buildings damaged as a result of Super Cyclone Amphan in India’s eastern coastal states of Odisha and West Bengal, where trees and electric poles were uprooted and dozens of lorries overturned on coastal highways. According to reports, 10 people were killed in West Bengal.

Super Cyclone Amphan has crossed over to Bangladesh after leaving a trail of destruction in the Indian states of West Bengal and Odisha. According to India’s federal Meteorological Department, “it is likely to continue to move north-northeastwards and weaken further into a Deep Depression during the next three hours."

​Over 500,000 people in West Bengal and 150,000 in Odisha were evacuated to safer places and shelters. The head of West Bengal, Mamata Banerjee, said the cyclone caused approximately $13 billion worth of damages in the state.

India's federal weather office has warned of heavy rainfall in northeastern states of Assam and Meghalaya on Thursday.

Both of the most heavily-affected states are also in the grip of the COVID-19 pandemic, with West Bengal recording a caseload of 3,103, which includes 1,136 recoveries and 253 deaths. Odisha has registered 1,052 cases, including 307 recoveries and six deaths. At the national level, according to data released by the federal Health Ministry on Thursday, the cumulative caseload was 112,359, including 45,300 recoveries and 3,435 deaths.