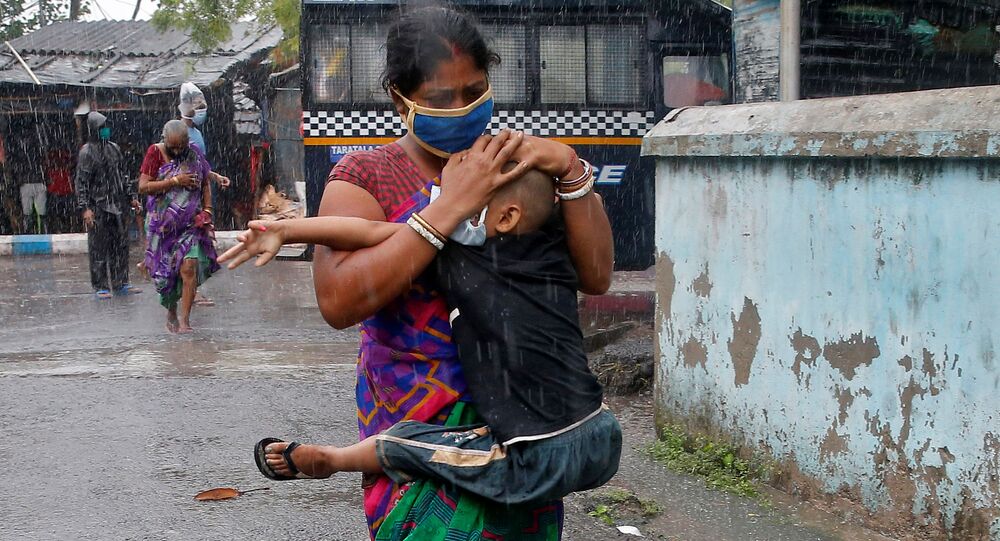 New Delhi (Sputnik): West Bengal is facing the impact of Cyclone Amphan. The cyclone will stay for two to three hours before moving towards northeast towards Bangladesh.

The landfall of Cyclone Amphan, an extremely severe storm, has begun after it crossed West Bengal between Digha and Hatiya near Sunderbans and moved northeast with a wind speed of between 150 km/hour, and 165km/hour, Indian Meteorological Department (IMD) head Mrutyunjay Mohapatra said.

​The National Defence Response Force (NDRF) has already evacuated about 500,000 from West Bengal and more than 100,000 from Odisha, where the cyclone has already passed.

“We are keeping close watch as situation is fast changing, transforming situation. Our duty doesn't end with the landfall; it actually starts after the landfall. Post-cyclone the recovery work starts, so this is a long haul,” NDRF director general SN Pradhan said.

Pradhan revealed that all his teams have satellite communication QDA, and are not dependent on any other system. “We are self-dependent and can set-up our own communication system. Rescue teams are equipped with range of communication set up with VhF for local and HF for long range apart from satellite phone which are being used as per situation and need,” he told Sputnik.

​The NDRF has deployed two battalions, one in Odisha and the other in West Bengal. The Odisha one is based in Balasor while the Bengal command is in South Chaubis Pargana district, which is in the direct path of the storm.

The DG has said the cyclone response will be impacted by COVID-19.” All natural disasters will require context of COVID-19, be that cyclones or the floods in coming monsoon. All teams are in use. More teams have been deployed in areas under more pressure,” he said.

To achieve this, the NDRF is working in care homes, helping with sanitization and maintaining physical distancing norms.

​“165km/hour is a disastrous wind speed which can cause massive damage. So we are expecting uprooting of big trees, widespread damage to mud houses, tin houses, old structures, modes of transport to be affected, standing crops as well. With the wind, we are expecting heavy rainfall, more than 20cm in some areas. Tides in south Pargana and north Pargana, where storm and tidal wave can be around four to five metre high,” the IMD chief told Sputnik.

“River water in Ganga and Brahmputra delta will mix with the saline water affecting the drinking water, causing soil erosion and salinity damaging the crops. That's why the storm is called a killer”, Mohapatra added.