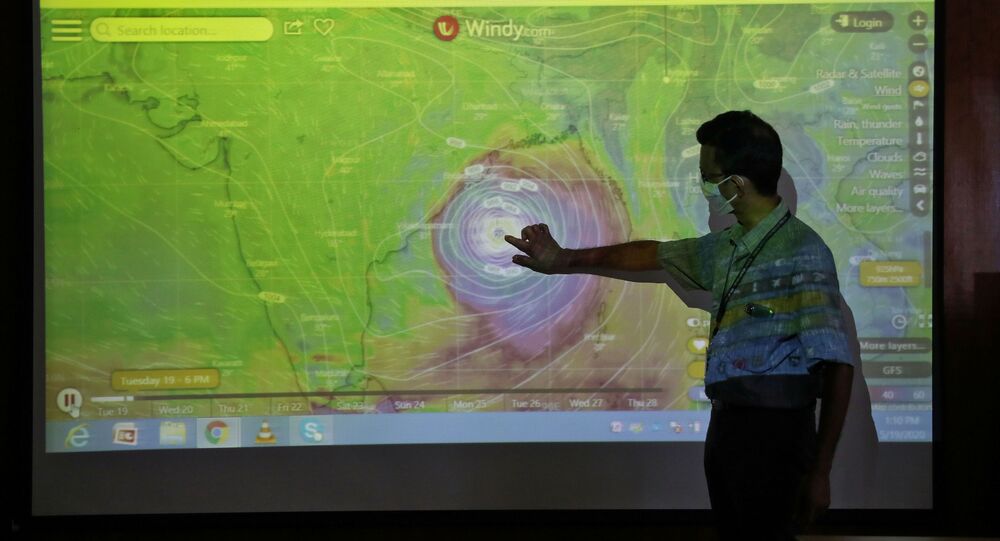 New Delhi (Sputnik): Indian authorities have started evacuating hundreds of thousands of people in the eastern coastal region in the states of West Bengal and Odisha, which are in the path of the super-cyclone Amphan. India’s federal weather office has warned that the storm could make landfall between Tuesday afternoon and Wednesday evening.

The cyclonic storm was preceded by gale-force winds, a high tide and torrential rain along the coastal region of Paradip, Chandbali, Bhubaneshwar, Balasore, Puri and Gopalpur in Odisha. In West Bengal, the cyclonic storm is expected to hit Digha, slamming the coast at a speed of 225 kilometres per hour.

#SuperCyclone #Amphan is approaching #Odisha and #WestBengal and is expected to make landfall between afternoon and evening today. #StaySafe (Images from Digha, West Bengal pic.twitter.com/hTPrjfVhCx

​The weather office has warned that extensive damage to all types of semi-permanent houses, communication and power links, disruption of rail and road link at several places, damages to standing crops, plantations and orchards, uprooting of large bushy trees. It also warned that large boats and ships might get torn from their moorings.

The head of West Bengal, Mamta Banerjee, said on Tuesday (19 May), that the state has already been hit by COVID-19 and there are thousands of migrant workers returning from other states as the prolonged lockdown deprived them of their livelihood.

According to Mrutyunjay Mohapatra, Director General of the India Meteorological Department, Amphan is the second cyclone of its kind since the super cyclone witnessed in 1999.

India is already in the grip of the global pandemic COVID-19; 106,750 had contracted the virus as of Wednesday, including 3,303 who later died and 42,298 who have recovered from the infection.

West Bengal has a caseload of 2,961, including 1,074 cured cases and 250 deaths. In Odisha there have been 978 cases; five people have died and 277 have recovered so far, according to India's federal Health Ministry.