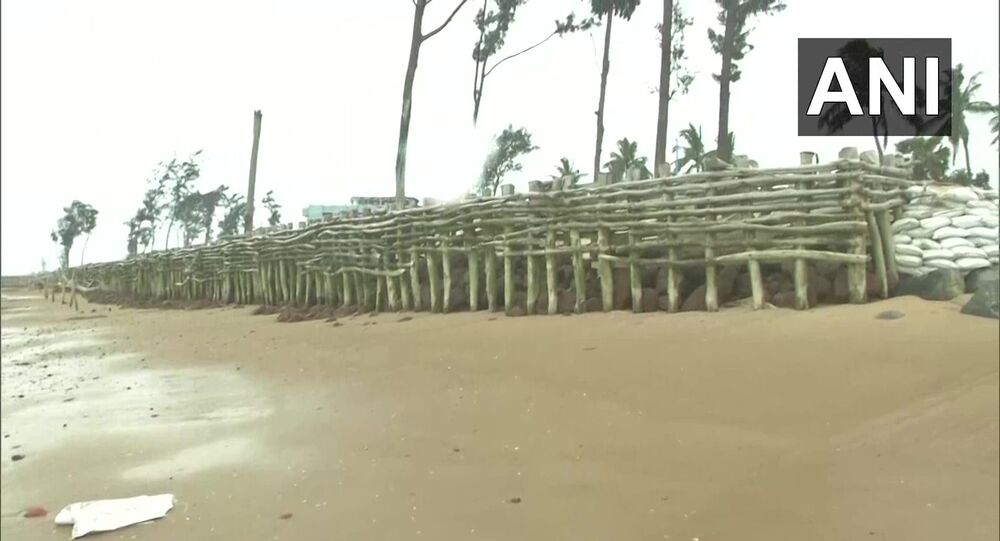 New Delhi (Sputnik): Millions of people in India and Bangladesh are set to face of one of the worst storms ever, which is due to make landfall within less than 24 hours in India. India is already grappling with more than 100,000 confirmed infections after it recorded its largest single-day surge with a total of 5,242 new cases.

Touted as the strongest storm ever in the Bay of Bengal, Super Cyclone Amphan has been rated a category 5, with a maximum wind speed of up to 270 kilometres per hour (165 miles per hours) and gusting to 245 miles per hour.

While states are gearing up by taking precautionary measures, the villagers in West Bengal state are safeguarding the coastal areas by building a temporary fence along the coast to reduce the intensity of the cyclone.

West Bengal: Residents of Tajpur, East Medinipur create a temporary fence along the coast, in the wake of #AmphanCyclone pic.twitter.com/g4Vb1pd0Vi PMOIndia #xenoh

Temporary corridors of wooden logs have been erected along the coats by residents of Tajpur in East Medinipur area, expected to be worst affected by the cyclone.

Three coastal districts of East Midinipur (also described as Midnapore), South 24-Parganas and North 24-Parganas are expected to be the worst affected, according to India Meteorological Department (IMD).

India has commenced the evacuation of millions of people, who could be hit by damaging winds, heavy rain and high-intensity waves. Apart from deployment of National Defence Response Force (NDRF) and defence forces, power and telecommunications departments have been directed to take emergency measures to tackle the storm.

Amphan would be the second super cyclone to hit the Bay of Bengal. Nearly 15,000 villages were affected and 10,000 people were killed in the last super cyclone in 1999.