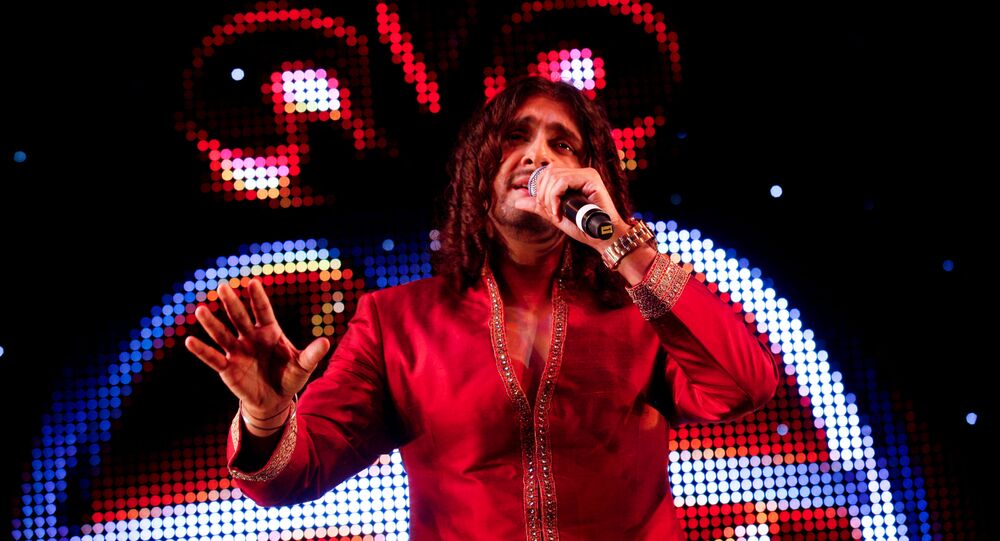 New Delhi (Sputnik): Singer Sonu Nigam is a name to be reckoned with in the Indian music industry and is best known for being the voice of Bollywood star Shah Rukh Khan in on several of his hit tracks.

Bollywood singer Sonu Nigam, who is also a member of the Indian Singer's Rights Association (ISRA) – a statutory body under the Indian Copyright Act 1957 that secures royalties for artists, has joined forces with several established vocalists to raise funds for the Prime Minister’s Citizen Assistance and Relief in Emergency Situations (PM-CARES). The latter is a public charitable trust that helps in emergency situations like the present coronavirus outbreak.

A digital concert, hosted by Bollywood star Akshay Kumar and applauded by Prime Minister Narendra Modi himself, witnessed singers and musicians performing from their homes. Titled “Sangeet Setu Virtual Concerts”, it started on 10 April and witnessed the performance of industry veterans like Asha Bhosle, SP Balasubramanian, Udit Narayan, Kumar Sanu, and many more.

Here’s the first day of #SangeetSetu.

Seeing such wonderful performances will make you happy. Do watch it tomorrow and the day after if you can. https://t.co/WQ5bq9IqFW

“These are days of global crisis. Everyone has to understand his/her responsibility not only as a citizen, but a human. Everyone has to contribute in whatever way one can. We are doing something unprecedented. I did a live concert from Dubai on the day of the Janata Curfew (22 March). It was seen by 1.6 million people and lauded by all", Nigam tells Sputnik.

“We have been associated with the Indian Singer's Rights Association or ISRA from the stage of its inception to its establishment. Even before its creation, we had held a concert for the prime minister's relief fund during the Tsunami under Singers' Association of India”, Nigam says.

He also says that ISRA was established to bring about a fairer system to an otherwise feudal music industry.

“Changes take some time to come and changes that involve inflated egos, take a little longer to come".

So what is keeping him busy nowadays?

“I am enjoying a very blissful life after four decades of professional success in the industry. I don't even think about what's happening or what should happen. Before the lockdown, I had no time to breathe owing to a lot of travel. Then I took a break and went to the Himalayas with my brothers. Right now, I am in Dubai and extremely caught up with certain activities we are doing from here", he signed off.

Of late many Bollywood stars including Akshay Kumar, Priyanka Chopra, and Shah Rukh Khan, have contributed to the PM-CARES fund to combat COVID-19. The virus has so far infected 9,152 people in India, with 308 deaths as per data released by the federal Ministry of Health & Family Welfare on Monday.