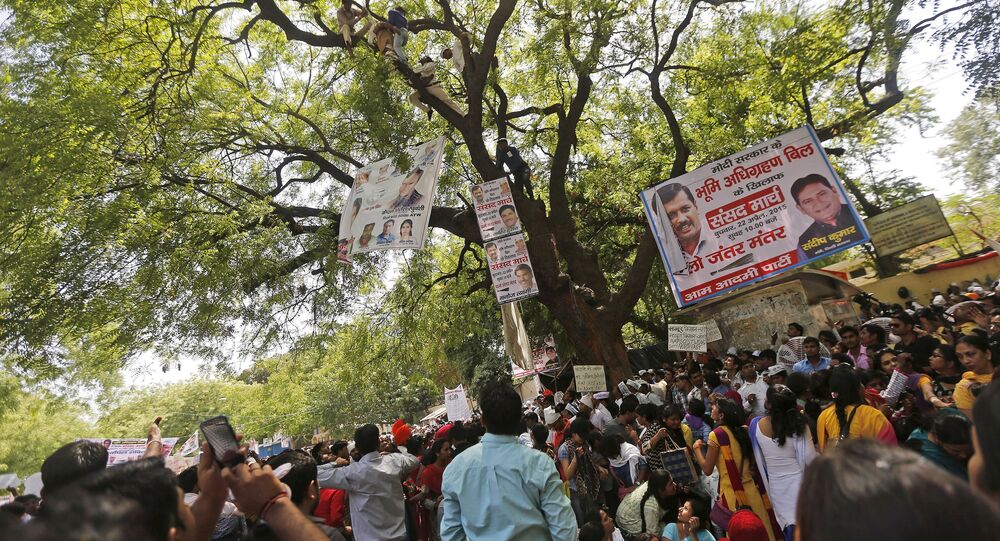 New Delhi (Sputnik): The national capital Delhi has witnessed fierce clashes since Sunday between supporters and opponents of the Citizenship Amendment Act (CAA). The clashes soon turned into communal riots following the chanting of religious slogans by both sides, leaving at least 34 people dead and around 300 injured.

The family of Intelligence Bureau (IB) member Ankit Sharma has accused Delhi's ruling Aam Aadmi Party (AAP) politician Tahir Hussain for the death of their family member during the Delhi riots. The allegation was levelled as a controversy erupted after videos surfaced which allegedly suggested Hussain's role in the three days of violence in northeast Delhi.

Ravinder Sharma, the father of the deceased who also works for the IB, alleged that Hussain's supporters beat his son and later shot him. The autopsy report is yet to be released.

Ankit Sharma's body was removed on Tuesday, from a drain near his house in Jaffrabad area, one of the epicentres of the riots.

Meanwhile, AAP Councillor Hussain has released a video clip to demonstrate his innocence and says he is being framed by India's ruling Bharatiya Janata Party.

Responding to the allegations against Hussain, AAP parliamentarian Sanjay Singh said: "From the very first day, the AAP has been saying that any person, be it from any party or religion, action must be taken against them if guilty."

Delhi Police has said that a probe is underway to verify Hussain's role in the riots, as alleged by media reports. "The probe is in its initial stage, and the video footage is being verified. Action will be taken based on the results," the official said.

Notably, a recording of a purported call surfaced on Tuesday in which a man can be heard reprimanding and warning another man against taking part in the riots and accusing him of fueling the communal riots in northeast Delhi's Mustafabad area. It is being alleged that it was a conversation between AAP's Sanjay Singh and councillor Hussain.

Delhi has been grappling with violence since Sunday over the Citizenship Amendment Act (CAA) which was passed in December 2019. A curfew has been imposed in the areas of northeast Delhi where the violence took place, and paramilitary forces have been called in.

The CAA is being targetted for being discriminatory towards Muslims, as it excludes illegal Muslim immigrants from being granted citizenship in India. Hindus, Sikhs, Parsis, Christian, Jains, and Buddhist immigrants who settled in India from Afghanistan, Bangladesh, and Pakistan on or before December 2014 can get Indian citizenship under the newly amended law.

The government has clarified in Parliament, that no Indian citizen has reason to worry about the law, as it gives citizenship to immigrants and does not take away anyone's citizenship.