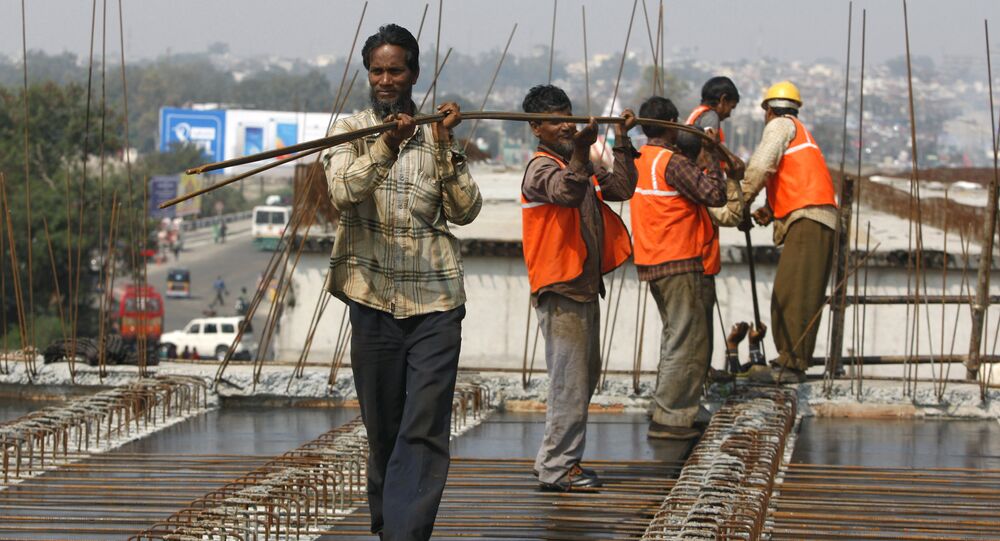 New Delhi (Sputnik): In 2017, India set up a resource centre for migrant workers heading to the Gulf region, to minimise the risk of its citizens getting lured by fake job offers and prevent their exploitation. However, a large number of Indians are still lured in by dubious employment agencies and find themselves in horrid working conditions.

Nearly 40 Indian workers  trapped in Muscat, the capital of Oman, have complained that they were being exploited by their employer and are forced to live on food once a day; they have not received wages for the past seven months.

According to media reports, these labourers from the Indian state of Jharkhand were taken to Oman in 2017 to work on power transmission lines.

The workers have now approached Indian Foreign Ministry tfor help as their visas have expired, and they have no money to return home.

“The company in which we work has stopped giving us salaries. They threaten us whenever we demand our rightful salary,” their letter to the Indian External Affairs Ministry reads.

These workers belong to Giridih, Hazaribagh, Bokaro and Koderma district of Jharkhand, a tribal state.

According to relatives, the workers, who had been relied upon to send money home, are kept locked in a room. Their families have also urged the Indian government to help their loved ones return home.

In 2017, India's then-external affairs minister Sushma Swaraj organised the Indian Workers’ Resource Centre in the United Arab Emirates (UAE) to prevent the exploitation of workers in the Gulf region and address their grievances via a 24-hour helpline.

According to data released by the Indian Foreign Ministry, there were 688,226 Indian workers in Oman in 2017.

The non-payment of salaries and denial of legitimate labour rights comprise major complaints, according to the Ministry.

#BJPFreeIndia: With Jharkhand Defeat, BJP has Lost Half Its Stake in Indian Politics Over Two Years