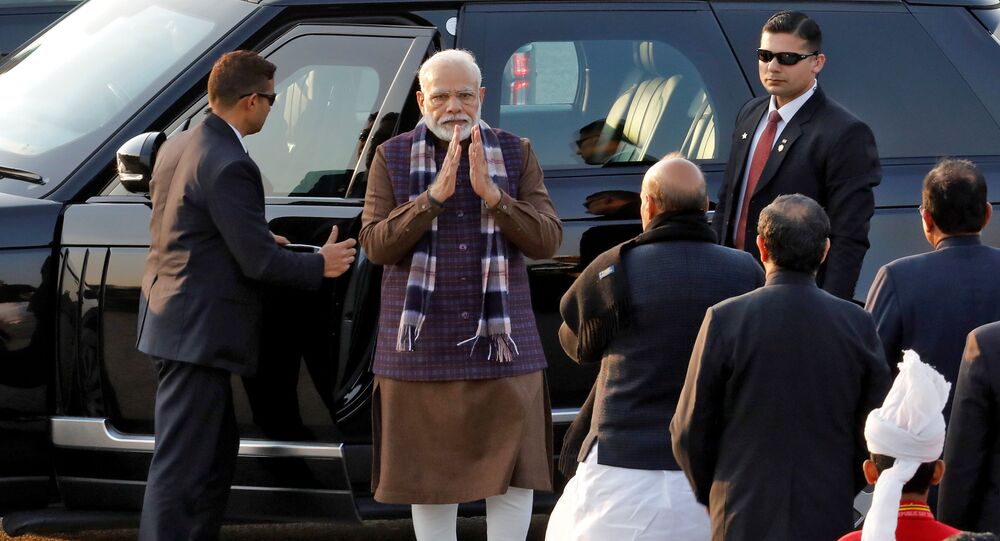 The Aam Admi Party (AAP) holds the overwhelming majority of the 70 seats in Delhi's local legislature, the Delhi Legislative Assembly, and is eager to retain its control amid the efforts of the BJP, which controls only four seats.

Meanwhile, the Congress party, which ran the city for 15 years, from 1998 to 2013, but currently has no representation in the local legislature, has failed to be a major contender, except for the involvement of its leaders Sonia Gandhi, Rahul Gandhi and Priyanka Gandhi in the campaign.

While the BJP is aggressively targeting AAP and Congress in its campaign by painting them as anti-Hindu, Delhi Chief Arvind Kejriwal has maintained his focus on civic issues by releasing his 5-year work report, calling it his ‘report card’.

Arriving as a newbie in politics with the promise of standing up against corruption and the system, Kejriwal's party of the 'common man' swept the 2015 elections, with BJP getting a meagre three seats and Congress not getting any.

A cross-section of Delhi voters found Kejriwal suitable to tackle local issues like food, power and water, while Narendra Modi was believed to be competent to ensure national security and safeguard the borders.

While India's BJP is busy promoting nationalism and the need to oust illegal citizens from the country, the issue of providing basic amenities like electricity and clean water seems to be close to the heart of people in the lowest strata of society in India's capital city.

Kailash Chand (24), who drives an auto-rickshaw, said it was the basic needs that mattered the most for people from his socio-economic background.

“The mindset of the people from my section of society is such that we are more concerned about day-to-day issues like clean water and electricity rather than Hindu-Muslim politics,” he said.

When asked to which party he is rooting for, Pawan, a worker at a mobile repair shop in Samaypur Badli constituency, said, “Definitely Aam Aadmi Party more than the other two, as they have been working for the betterment of our segment of society. You look at significant healthcare (improvements) in the ‘Mohalla Clinic’ (Neighbourhood Clinic) programme and the development of government schools the party has done,” he said.

There were those who shifted their loyalties, switching from BJP to AAP and vice versa due to class-related concerns. While a financial professional gave his reason for switching to Kejriwal's government as the growth of Delhi, others said it is important to support Modi due to a growing ‘anti-national’ wave, referring to the protests against the controversial Citizenship law.

Abhishekh Ahluwalia, a senior financial professional working in adjoining Gurguram, who supported BJP for several terms, said it was a faceless party as they haven’t revealed the name of their chief ministerial candidate, while maintaining that AAP was capable of better governance in Delhi than any other party.

“AAP is doing a good job despite lack of support from the ruling federal BJP government. In terms of civic services and the installation of a surveillance system in the city, they have proven themselves despite minimal support from the centre. Rather than disturbing the already-stable AAP government, it is better that a party that has worked for the last five year should continue,” said Ahluwalia.

The union of Autorikshaw drivers of Delhi played a massive role in the impressive electoral debut of AAP in 2015 and openly confessed their love for the party by pasting “I Love Kejriwal” stickers on their vehicles.

However, some of them have since switched to BJP, revealing a crack in the universal support the party had from them.

An auto rickshaw driver from Delhi became furious when asked if he was still rooting for Kejriwal.  “I voted for him in the last elections, but he took away my living by giving free bus service to female passengers. How will he pay for the bus fare for women, he is spending the taxpayers' money for the freebies,” said Anil Mondal, a native of West Bengal who resides in Delhi now.

Another auto rickshaw driver said he was satisfied with Kejriwal’s work but would cast his vote for Modi's government this time due to the growing wave of nationalism.

Riding the tide of nationalism along with the Modi wave, BJP supporters asserted that national security, stronger borders and Modi's good track record decreasing the number of terrorist bombing attacks are the main factors compelling them to back the prime minister's party in Delhi.

Despite the fact that the Indian economy was witnessing a six-year low amid low foreign investment and a fall in revenues, some people maintained that it has more to do with inevitable factors.

Tarun Tanwar, a resident of south Delhi and a senior financial professional, claimed that because he was financially stable at this point and time, he was not directly impacted by economic growth, or the promise of assistance obtaining things like food, electricity and other basic necessities.

“Regarding the economic slowdown, I would blame it, 50 percent, on the failure of the current government, and the other 50 percent on circumstances which are beyond their control. Also, I am not directly impacted by the economy at this juncture. I need social security and I am not concerned about basic necessities like food, electricity and water. It is more about the social strata of individual,” said Tanwar.

“Safeguarding the borders, maintaining national integrity and not compromising national security when faced with terrorist attacks are the factors that are being well-taken-care-of by the BJP,” he added.

Has Congress Accepted Defeat Before a Fight?

With no big name in their campaign apart from Sonia Gandhi and Rahul Gandhi against the star-studded rallies of BJP, the voters of the national capital seems to be unaware of the candidates of the nation's largest opposition party, the Indian National Congress, which governed Delhi for 15 years (1998-2013).

While the AAP government was involved in a door-to-door campaign under the leadership of Arvind Kejriwal and the BJP have national leaders like Narendra Modi, federal Home Minister Amit Shah and the party chief Jagat Prakash Nadda need to reach out to voters.

"Every day we see some road show or bike rally by one of these two parties (referring to AAP and BJP). I know the candidate from both but I'm completely unaware of the candidate from Congress. They haven't visited us nor do we know about their campaign in the area," said Inder Kumar, a resident of Samaypur Badli.