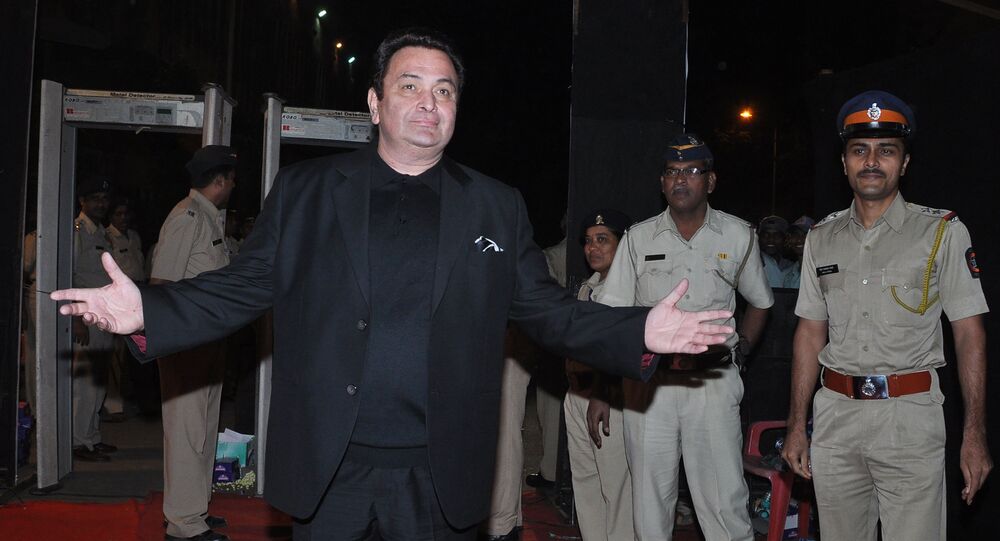 New Delhi (Sputnik): Veteran Bollywood actor Rishi Kapoor, who returned to India in September 2019 after several months of treatment for cancer in New York, was admitted to a hospital recently in New Delhi with close family and friends by his side. According to media reports, he seemed to have suffered a relapse of the disease.

Rishi Kapoor, who made headlines with his announcement of his new film, a remake of Hollywood's "The Intern" and which will also feature Deepika Padukone, took to Twitter on Tuesday morning to rubbish all reports surrounding his health, saying people make their own assumptions and that whatever has been reported is false.

In a series of tweets, he said the doctor had found a patch that could have led to pneumonia if it had not been treated in time and now was looking forward to entertain the world again. He also said he had been filming in Delhi for the past 18 days and because of the pollution in the city as well as his low count of neutrophils, he suffered an infection for which he had to be hospitalised.

“I was running a slight fever and on investigation, doctors found a patch which could have led to pneumonia, was detected and is being cured. People seem to have assumed a lot different. I put to rest all those stories and look forward to entertain and love you. I am now in Mumbai”, his tweet reads.

Dear family,friends,foes and followers. I have been overwhelmed by all your concern about my health.Thank you. I have been filming in Delhi past 18 days and because of the Pollution and my low count of neutrophils, I caught an infection whereby I had to be hospitalized. (1).....

I was running a slight fever and on investigation,Dr.s found a patch which could have lead to pneumonia,was detected and is being cured. People seem to have assumed a lot different. I put to rest all those stories and look forward to entertain and love you. I am now in Mumbai.

Earlier, Rishi spoke about his battle with cancer via social media during his stay in New York and how he desperately wanted to come back home.

He informed that his eight months of treatment started on 1 May in the US and how God was kind to him when he got to know that he was cancer-free after proper treatment.

Today I complete eight months here in New York. When will l ever get home?

During his stay in New York, many Bollywood stars, including Priyanka Chopra, Deepika Padukone and Shah Rukh Khan, visited him.

Rishi Kapoor is not the only Bollywood celebrity who has battled cancer, as there are names like director Rakesh Roshan, Manisha Koirala, Lisa Ray, Sonali Bendre, Tahira Kashyap, and many more who have conquered it with aplomb.