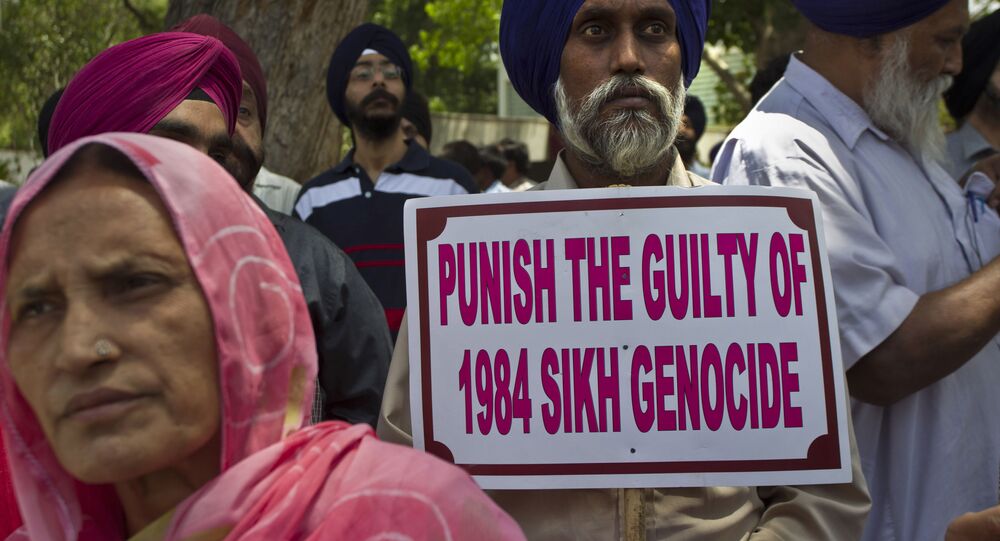 New Delhi (Sputnik): A Sikh massacre occurred in 1984 in India after the then Prime Minister Indira Gandhi was assassinated by her Sikh bodyguards. The violence claimed 2,733 lives, according to government estimates. Several politicians, most of them from the Congress party, were accused of inciting violence and communal tension.

The Government of India has told the apex court that it has accepted Justice Dhingra Committee’ Report which examined the role of the Delhi Police in anti-Sikh riots that occurred in 1984 following Indira Gandhi’ assassination.

In its report, the Committee has made a crucial point which states that a Delhi Police Inspector (Station House Officer) helped rioters while they were attacking the Sikhs in the city. It also mentions that the then Delhi government and police failed to file their reports on time, leading to loss of several important records.

It also mentioned that Delhi government only filed its10 FIRs (First Information Reports) in which all the accused were acquitted.

The committee named S.S. Bal, the judge who was instructed to try all riots cases from 1989 to 1995, noting that: “He acquitted all accused in all the riots cases that he decided.”

Solicitor General Tushar Mehta, the second highest ranked government lawyer told the apex court that it accepts the findings of the committee in the role of Delhi Police in riots and will be taking action.

The Justice Dhingra Committee was set up in 2018 on the directions of the Supreme Court of India after a petition filed by a riot victim sought an inquiry into the role of 62 policemen named in the anti-Sikh 1984 riots. The committee filed its reports in November 2019.

Described by many as Iron Lady of India, Indira Gandhi, the only woman Prime Minister of the country, was shot dead on 31 October, 1984 by two of her Sikh bodyguards. This was to avenge the Indian Army’s use of force against militants hiding in the famous Sikh shrine Golden Temple in Amritsar city.

The assassination triggered riots in different parts of the country, targeting Sikh lives and property.