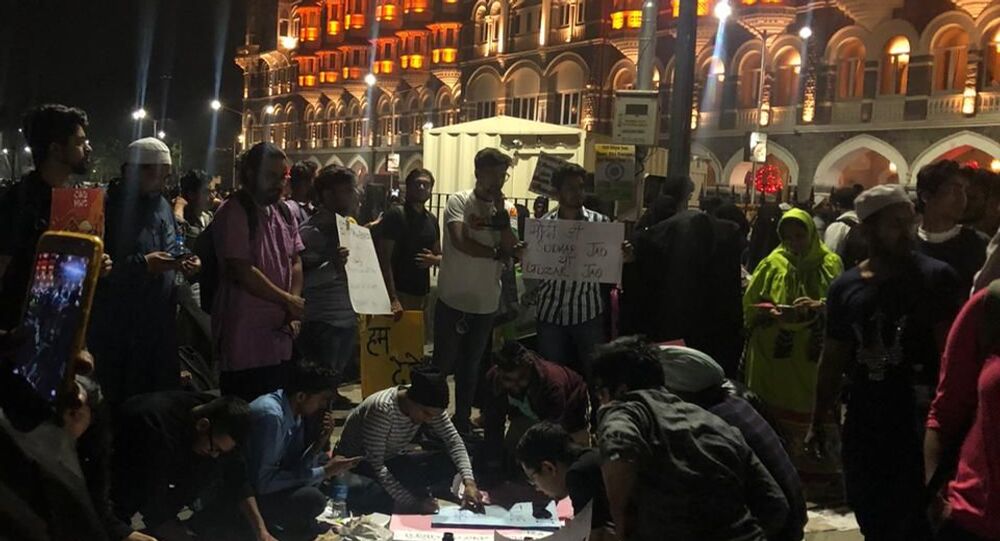 New Delhi (Sputnik): India has been hit by a series of protests for the past month, first against a controversial citizenship law, and now against violence unleashed on students and teachers at Jawaharlal Nehru University (JNU) in Delhi by unidentified masked men and women.

India’s Bollywood fraternity joined a large number of people gathered in the western city of Mumbai on Monday evening to raise their voices against the attack on Jawaharlal Nehru University that left dozens of students and teachers injured on 5 January.

Gonna tell my kids that they were real heroes ❤️ #IStandwithAnuragKashyap pic.twitter.com/pOkAVuWqDY

​Bollywood is an integral part of India’s diverse social fabric, and B-town celebrities command considerable influence on a large chunk of Indian population.

The presence of popular stars drew many into the protests, and they also appreciated Bollywood’s sensitivity to important incidents that shook the nation.

These are the real hero of Bollywood, they have guts to face all this shit as compare to so called actors..#IStandwithAnuragKashyap pic.twitter.com/b68EGZRzIK

The Lions of Bollywood 👉@anuragkashyap72 & @anubhavsinha not just Tweeting & Doing Desh Bhakti.. Actually Stepping out to Protest in support of #JNU students #IStandwithAnuragKashyappic.twitter.com/FJSKCy61Fr

History will always remember them for standing with the citizens.#IStandwithAnuragKashyap pic.twitter.com/v2lLg0ZN9Q

​The hashtag #IStandWithAnuragKashyap was trending on Twitter in India with more than 80,000 mentions already.

The director, famous for his firm opinions and blunt comments on Indian Prime Minister Narendra Modi, Home Minister Amit Shah and the governing Bharatiya Janata Party (BJP) government, acknowledged the support he garnered from netizens and thanked them via Twitter.

I was tweeting in isolation and had no idea that i had so much support across the country. Thank you for standing by me India . #letsTakeOurCountryBack

​Indians in large numbers have gathered in different cities across the country to raise their voices against the brutality towards the university students.

The vandalism and violence that was unleashed on the students of Jawaharlal Nehru University by masked intruders on 5 January in New Delhi has added fuel to the fire with tensions already high after the govt introduced the Citizenship Act (CAA) and National Register of Citizens pic.twitter.com/37zd2Eid4Z

Students at JNU have been protesting against a fee hike in recent months. After the post-winter break, the situation has again become tense on campus, with a section of students opposed to holding a new semester registration process, without resolving the fee issue.

The controversial Citizenship Amendment Act (CAA) seeks to grant citizenship to illegal immigrants from three neighbouring Islamic countries, except Muslims. While Indian Prime Minister Narendra Modi says the law “manifests India’s ethos of harmony and compassion", his detractors feel it goes against the provisions of the Indian Constitution and discriminates on a religious basis.