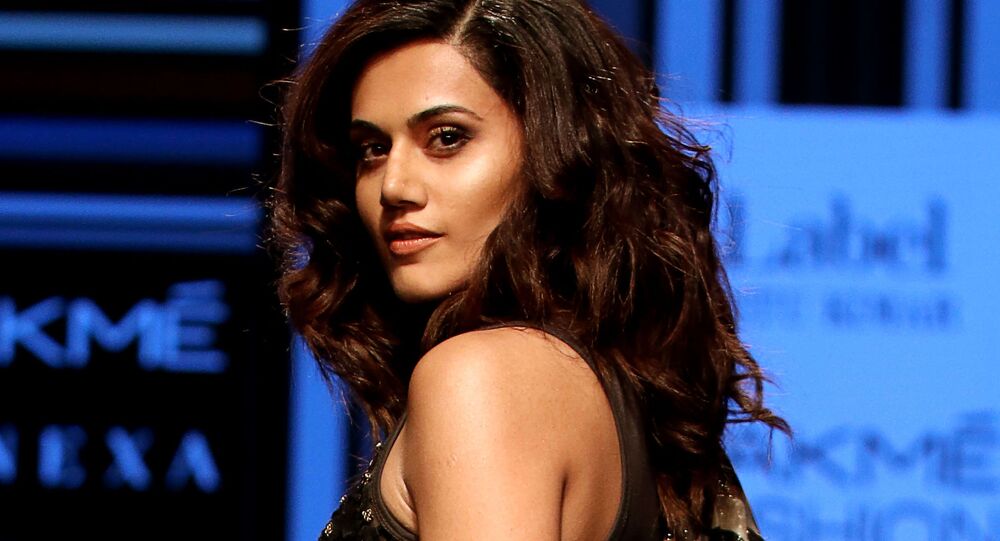 Panjim (Sputnik) - Taapsee Pannu, the curly-haired engineering student who has managed to make it big in the Indian film industry, received her first film just ahead of her plan to pursue an MBA.

On Saturday, Taapsee Pannu addressed a session titled "Women in Lead" at the eight-day long International Film Festival of India (IFFI) going on in Panjim, Goa.

Even though the movie only managed to pull off a mediocre box office collection of $8.5 million (INR 59 crores), Taapsee's work was highly appreciated. That is when the actress was convinced of her potential in the movie business.

"I realised that in commercial Hindi movies, the competition is fierce. My contemporaries are not only talented; they are also drop dead gorgeous. I was appreciated for Chashme Baddoor, but I wanted to do something more to leave an impact", Taapsee said.

The actress, who said she is very "black and white" in choices, soon shifted her line of work to feature in movies where she could act as a female protagonist and shone in movies like "Pink" and "Badla" (Revenge), while sharing screen time with the megastar of the millennium, Amitabh Bachchan.

The actress further played small, but significant parts in movies like "Mission Mangal" where Bollywood biggies including Akshay Kumar and Vidya Balan were the main leads.

According to media reports, Taapsee, who advocates pay parity in the film industry, receives a little less than one million dollars per movie.

The young actress believes female actresses in India still have to compromise on their fees if the male lead is a bigger star. "When it comes to pay-scale equality, we still have a long way to go", the actress added.

Talking about dream projects, Taapsee clearly said she is looking for a film where she could play a "superheroine".

"I don't have a surname to protect. I am not answerable to a family, or a 20 year-long career. I have an edge, being an outsider, like I don't have that lineage to protect", the actress said at IFFI.

This year marks the 50th anniversary of IFFI, which is considered the Asian-equivilant of the Cannes Film Festival.