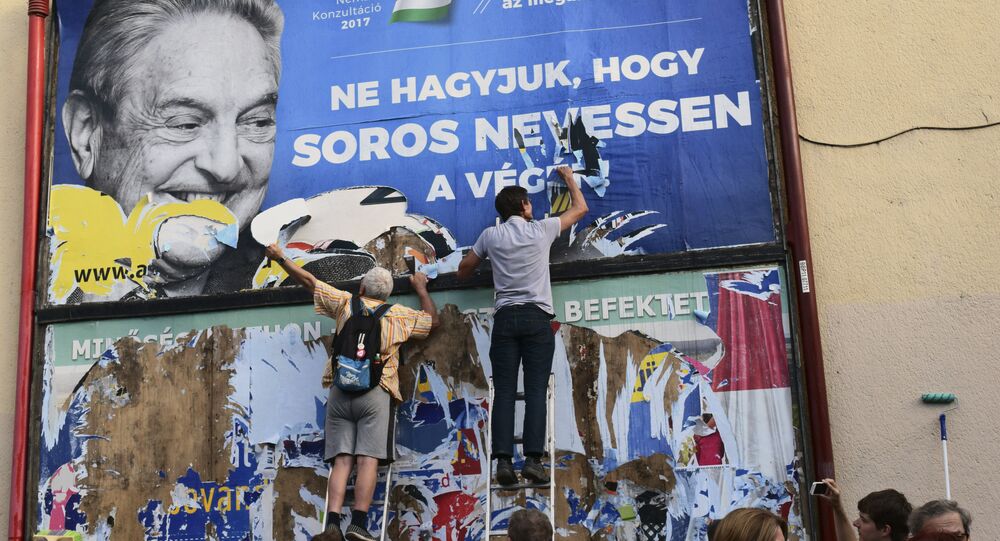 Hungarian-American billionaire George Soros has a notoriously poor relationship with the government of Prime Minister Viktor Orban. Budapest considers Soros a national security risk, and has accused his foundations of seeking to undermine Hungary’s democratic institutions. Soros’ interference in Hungarian politics goes back to the 1980s.

The Guardian ran a story on Sunday accusing Hungarian authorities of using an advanced Israeli spyware suite known as Pegasus to illegally keep tabs on the communications of journalists, lawyers and at least one opposition figure.

According to the outlet, leaked data and forensic analysis of smartphones by ‘Pegasus Project’, a collaborative investigation operated by the Paris-based journalism nonprofit Forbidden Stories, discovered that over a dozen Hungarian opposition figures were targeted in the hack attacks.

What the report didn’t mention, however, is that that George Soros’ Open Society Foundations (OSF) is a donor to Forbidden Stories. Soros, 90, is known to have engaged in a decade-long battle with the Orban government as the latter has sought to restrict the liberal philanthropist’s activities on Hungarian territory.

The alleged hack attacks reportedly targeted at least two journalists from Direkt36, a Hungarian partner of Pegasus Project which also receives cash from OSF, as well as the Rockefeller Brothers Fund and other ‘philanthropic foundations’.

Szabolcs Panyi, one of the Direkt36 reporters said to have been targeted, said a forensic investigation determined that his phone was infected by Pegasus at least 11 times, each of them taking place several days after he requested government officials to comment on stories he was working on.

© AP Photo / Francois Mori
Russian Security Council Chief Links Soros to Efforts to Destabilise Nations Worldwide, Including US
According to Forbidden Stories’ analysis of leaked records, at least five Hungarian journalists, an opposition politician and ten lawyers were targeted. The phones of a photographer working for a foreign journalist and a Belgian-Canadian gender studies student was also allegedly hacked.

A Hungarian government spokesman dismissed The Guardian’s reporting, saying Budapest was “not aware of any alleged data collection claimed by the request.”

Sputnik has not been able to independently verify the claims made by The Guardian on the Hungarian government’s alleged use of Pegasus, but has reported extensively on the spyware package over the past five years. The powerful spyware’s existence was first revealed in 2016.

In addition to allowing attackers to view all manner of content on a target’s phone, including photos, GPS location data and encrypted messages, the spyware lets hackers turn on the devices’ microphones and cameras, effectively turning users' own property into mobile viewing and listening devices. NSO Group, the Israel-based company behind the software, has long maintained that its programme is designed for use by governments to 'fight terrorism and organized crime'.

© AP Photo / Daniella Cheslow
Israeli Court Blocks Amnesty International Attempt to Curb Spyware Firm NSO
However, the software package has reportedly also be used in less than kosher ways, with journalists, opposition figures and other individuals in Mexico, Saudi Arabia, Spain, India, Kazakhstan, Azerbaijan, Bahrain, Morocco, the UAE and Rwanda, as well as Amnesty International, accusing governments and malicious actors of using the software to illegally spy on them. NSO Group has also been hit with complaints that its spyware can be used to mine data from Apple, Google, Facebook, Amazon and Microsoft servers without notifying users.

Commenting on the Hungarian hacking claims, NSO Group said that it “does not have access to the data of its customers’ targets,” and that it would “continue to investigate all credible claims of misuse and take appropriate action.”