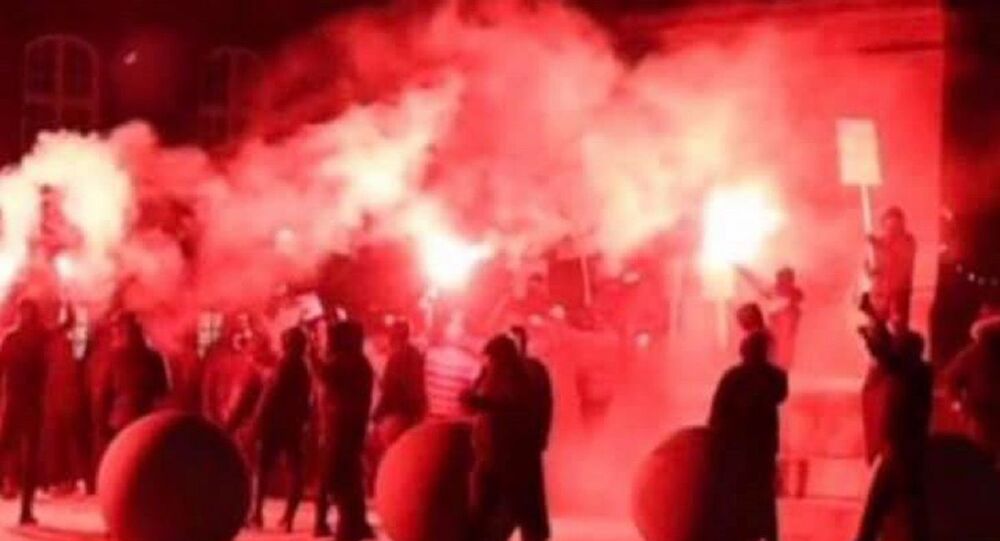 Before the demonstrations, Denmark, which has been under a partial lockdown since late 2020, had announced that it would ease some coronavirus restrictions but keep the majority of the restrictive measures in place despite protests from the opposition and members of the public who see the restrictions as an encroachment on their freedom.

Eight people were arrested during an anti-lockdown demonstration in Copenhagen this past weekend.

Organised by a group called "Men in Black", the gathering of around 1,200 people in the Danish capital was a reaction against the government's announcement that it was extending its numerous anti-coronavirus restrictions, TV2 reported.

The arrested individuals reportedly used illegal fireworks and exhibited rowdy behaviour. Otherwise, the rally was described as "largely peaceful" by the police.

​Initially, the demonstration gathered around 600 people, but the crowd subsequently doubled, as more people joined the gathering in front of Copenhagen's town hall.

​According to TV2, Hard Line leader Rasmus Paludan also showed up for the demonstration in Copenhagen and gave a short speech.

A demonstration was also held in Aarhus, the country's second-largest city. There, it was organised by the group Freedom Movement's Joint Council to show its dissatisfaction with how the government is handling the corona epidemic.

"Men in Black" previously arranged intense demonstrations in Copenhagen, Aalborg, and other major Danish cities, which led to arrests. In January, an effigy of Prime Minister Mette Frederiksen was burned in Copenhagen.

© REUTERS / RITZAU SCANPIX
Danish PM: COVID is Part of 'New Reality', Vaccinations Will be Needed 'Over and Over Again'
Denmark, which has been under a partial lockdown since late 2020, had announced that it would ease some coronavirus restrictions but keep the majority of the restrictive measures in place despite protests from the opposition and members of the public who see the restrictions as discriminatory.

While Danes have been allowed to visit some shops and take part in small-scale sports activities and public events, most restrictions have been extended until 5 April. For instance, bars, restaurants, and most educational institutions remain closed.

Although the number of new infections has fallen in recent weeks from their peak in December, when up to 3,500 new cases a day were recorded, the incidence of the mutated British strain, which has been identified as more contagious, has been rising, and remains a source of concern for the authorities.