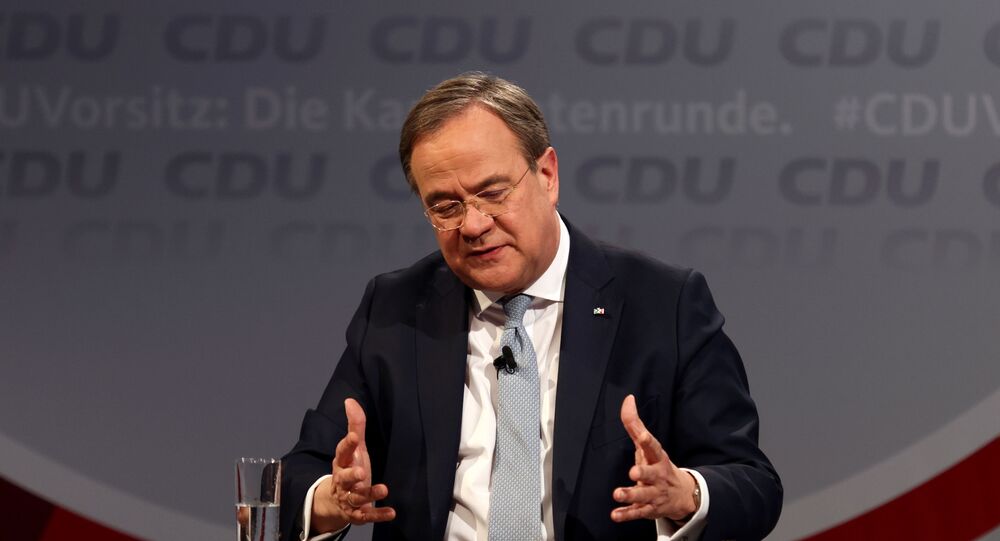 On January 16, Laschet was elected the new head of the CDU some eight months before the parliamentary elections in Germany.

“The attack on Alexey Navalny must be strongly condemned. Now Russia must arrest those behind the attack instead of arresting Navalny. I also want his immediate release. But the issue of gas deliveries – whether they should take place via sea or ground pipelines – does not depend on that,” Laschet told the Frankfurter Allgemeine Zeitung newspaper on Friday.

He also refuted some foreign countries’ criticism of the project, saying that it would not infringe on the strategic interests of Ukraine, as the contract on the pipeline construction protects Ukraine's position as a transit country.

On Thursday, a group of European Parliament lawmakers introduced a resolution calling to halt the construction of the Nord Stream 2 pipeline and impose new sanctions on Russia over the arrest of Navalny.

Navalny was detained on Sunday upon his arrival from Germany, where he was treated for his alleged poisoning, and placed in custody for 30 days for violating probation terms on an earlier embezzlement conviction. Many Western countries have issued statements calling for his release, while the Russian Foreign Ministry advised them to focus on their own domestic issues.

Commenting on EU sanctions toward Russia, Laschet said that he saw no ground to lift the sanctions imposed on the country.

“The main sanctions were imposed over the annexation of Crimea which violated international law. Another part [of sanctions] is linked to the implementation of the Minsk agreements and the conflict in eastern Ukraine. I would like to see more progress on the Minsk accords. The forces supported by Russia in eastern Ukraine stage covert and open acts of aggression. That is why there is currently no ground to lift the sanctions,” Laschet told the newspaper.

On December 10, participants of the EU summit decided to once again extend the economic sanctions against Russia. The restrictions were introduced over the 2014 crisis in Ukraine and Crimea's decision to rejoin Russia. The West has accused Moscow of meddling in Ukrainian internal affairs, while Russia has denied the accusations and introduced a food embargo on the states that targeted it with restrictive measures.