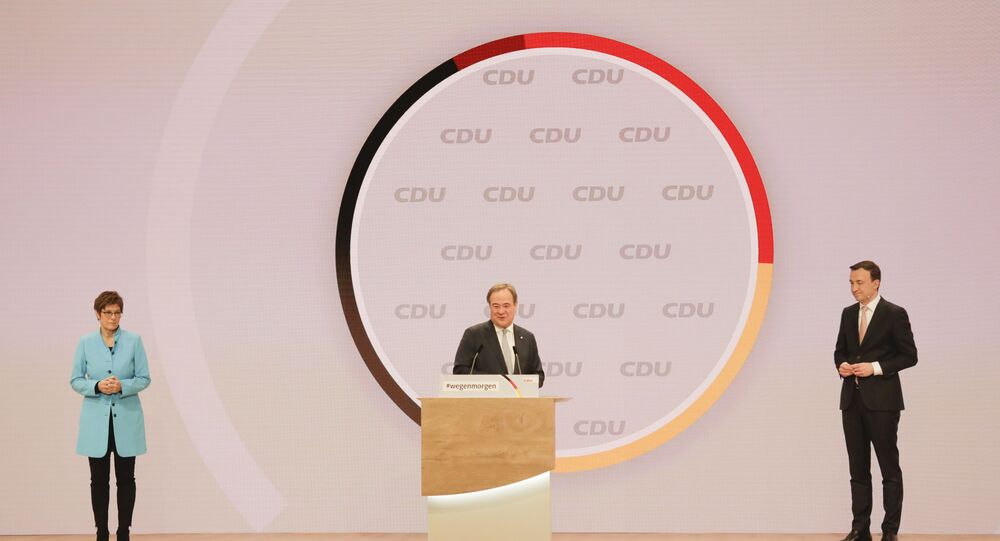 MOSCOW (Sputnik) - Armin Laschet’s victory in the ruling German party's leadership race came as no surprise, as he has never stood out by his personal political views and is deemed to be the most "convenient" and please-all successor for Angela Merkel, Albert Breininger, an Alternative for Germany (AfD) party member, told Sputnik.

"As expected, they chose a convenient person who is liked by everyone, who tries to please everyone. As an heir, he is much more convenient for Merkel than Merz, who has a clearer policy. Our Eins channel streamed the congress almost live. There was an undisguised influence on the congress delegates, who sat at their computers and simultaneously watched television, which unambiguously campaigned for one of the candidates. There are many questions about such an organisation [of the event]", Breininger said.

According to the politician, the AfD party would favour Merz, a former CDU heavyweight turned successful businessman who styled himself as more of a traditional candidate.

Hours before the vote, Breininger, however, admitted himself that Merz was "too conservative for the modern vision of the party, which Merkel was actively bringing closer to the left and the Greens." The party, he noted, "needs someone like Merkel."

Laschet has chances to become such a person, who, "while lacking own clear political beliefs, will smile and be liked by people", Breininger stated.

On relations with Russia, the AfD politician does not expect a cardinal shift from Merkel’s policy.

In a comment to Sputnik moments before the vote, Alexander Neu, a Bundestag member of the Die Linke party, projected Merz's victory, saying that he is "absolutely US-oriented and a very convinced neoliberal politician," who is favoured by media. Laschet, in contrast, "stands for reconciliation with Russia" and is "unacceptable for the transatlantic Hawks in Berlin", according to Neu.

Earlier on Saturday, Laschet, the premier of the most populous state of North Rhine-Westphalia, was elected as the leader of the Christian Democratic Union, beating Friedrich Merz in a runoff. The party held an online congress in the run-up to Merkel's planned departure after 16 years in office following the fall 2021 elections.