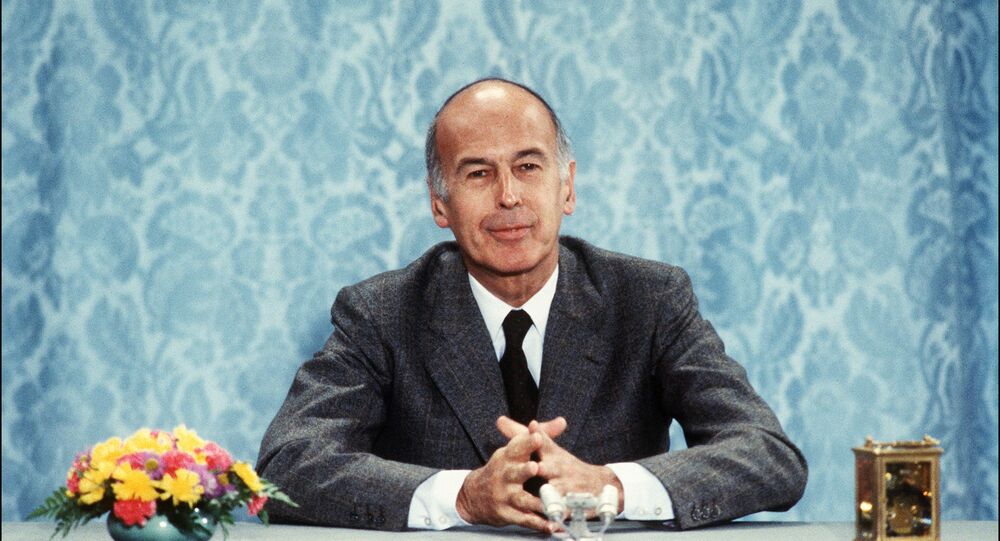 All three saw France’s position in Europe and the world from different angles and they had starkly contrasting personalities.

​Giscard - who was the incumbent in the Elysees Palace from 1974 to 1981 - was a rampant Europhile, whose younger years contained abiding memories of war between France and Germany.

He was born in Koblenz in 1927 to a civil servant who was serving in the French occupation forces in the Rhineland.

Nine years later Hitler marched into the Rhineland and when war broke out he served in the French resistance, the Maquis, and won a Croix de Guerre.

After the war he joined the civil service and in 1956 entered politics, serving under President Charles de Gaulle.

Giscard was never a Gaullist and his conservative politics had more in common with Germany’s Christian Democrats.

A letter that I received in 2004 from the former French President, Valéry Giscard d'Estaing, who has died from Covid-19. This letter was sent after he received a portrait that I drew of him. #ValeryGiscarddEstaing pic.twitter.com/bN5ZCiv5BI

​When President Georges Pompidou suddenly died in April 1974 there was tumult in France’s conservatives, with a widespread fear that the Socialists, under their charismatic leader Mitterrand, would win the ensuing election.

Mitterrand won 43 percent in the first round but Giscard came second with twice as many votes as his Gaullist rival Jacques Chaban-Delmas.

In the second round Gaullist voters and those supporting another conservative candidate, Jean Royer, switched to Giscard and he beat Mitterrand by a fraction.

Giscard thought of himself as a moderniser and he legalised abortion and divorce by mutual consent, and lowered the voting age from 21 to 18.

But he was also proud of France's imperial past and enjoyed visiting Francophone countries in Africa, where he rubbed shoulders with odious dictators like Jean-Bédel Bokassa, who created a self-styled Central African Empire.

Giscard forged a strong working relationship with West Germany’s Chancellor Helmut Schmidt, a Social Democrat, and they set up the European Monetary System, which would later to the creation of a single currency many years later.

Giscard tried hard to placate the British, who had only joined the European Economicy Community - as it was then - in 1972 and was friendly with Edward Heath but had difficulties working with Margaret Thatcher when she was elected in 1979.

In an interview with the Financial Times in 2014, Giscard chuckled when Thatcher’s name was mentioned.

In that same interview he paid faint praise to Merkel and criticised the current crop of EU leaders: "There is a bit of German leadership. The problem is it is German leadership, not specifically European leadership. We, in our minds, at the time, put European issues above national issues when we met. The British didn’t act like that. They always demanded their rights, their money, ‘payback’ – I don’t know what."

Giscard put the Franco-German relationship at the top of his agenda but while he was warmly regarded in Bonn - the West German capital before unification - he was never loved in Paris like de Gaulle or even Pompidou.

May his commitment and the energy he so ably demonstrated on the Convention guide us in our work in the Conference on the Future of Europe 🇪🇺 pic.twitter.com/5ZUeMbJSBf

​An aloof and haughty figure, he struggled to create a bond with the people, unlike his Gaullist rival Jacques Chirac.

In 1981 he sought re-election but was narrowly defeated by Mitterrand who would go on to dominate French politics like Thatcher did across the Channel.

Stung by defeat Giscard retired from politics but returned in 1984 and was elected president of the regional council in Auvergne.

In 1988 he refused to endorse his rival, Chirac, in the presidential election but seven years later Chirac finally made it to the Elysees Palace, defeating the Socialist Lionel Jospin.

"Europe without Greece is like a child without a birth certificate".

​In 2004 Giscard finally retired from politics but he was back in the headlines again five years later when he published a novel which involved a romance between a French president and a British princess.

Asked if the novel was based on Princess Diana and a real-life dalliance, Giscard told Le Point magazine of a conversation he had once had with her: "We were talking about love stories between the leaders of major countries and she said to me 'why don't you write a book about it?'"

Giscard is survived by his wife Anne-Aymone, and his children Valerie, Henri and Louis. Another daughter, Jacinte, died in 2018.