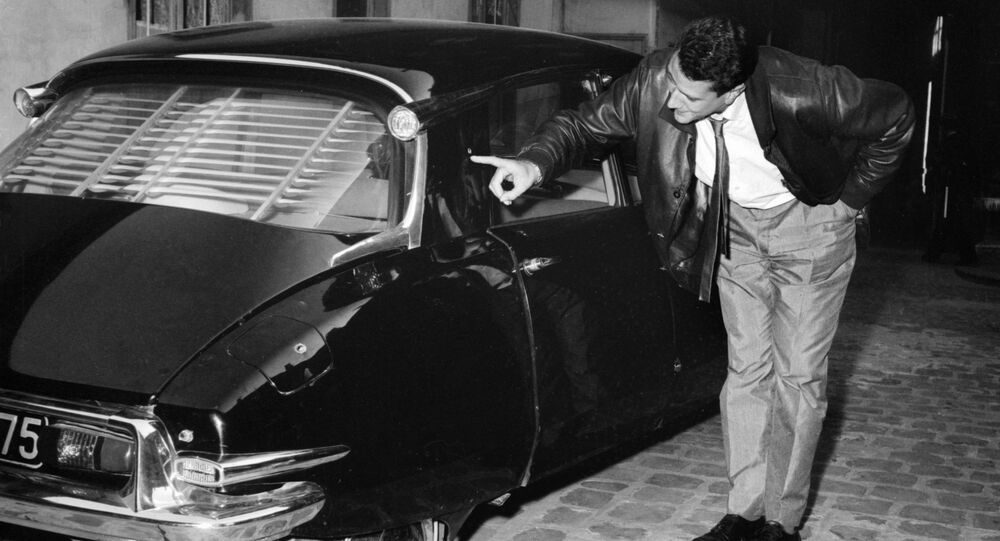 Day Of The Jackal: Did French President Turn Would-be Assassin Into a Martyr?

On 22 August 1962 France's President Charles de Gaulle narrowly escaped being killed by a gang of assassins who fired multiple bullets at his motorcade. Sputnik looks at what lay behind the assassination attempt and why de Gaulle chose not to grant clemency to the gunman.

Wednesday, August 22, is the anniversary of the most famous attempted assassination in post-war European history.

Charles de Gaulle had been the legendary leader of the Free French forces in the Second World War.

Untainted by the disgraceful collaboration of the Vichy regime, he had come out of the war as France's most renowned national leader and in 1958 the nation turned to him again as it became mired in an intractable conflict in Algeria.

De Gaulle, by then 67, was invited to become President of the new Fifth Republic amid a surge of popular support.

'Betraying' The Pieds-Noirs In Algeria

But he realized France would have to extricate itself from Algeria and in deciding to grant it independence he was labeled a traitor by the one million French settlers, known as pieds-noirs (black feet), who called Algeria their home.

In 1961 they set up a rebel group, the Organisation Armée Secrète (OAS), which sought to force Paris to change its mind and remain in Algeria.

But de Gaulle signed the Evian Agreements in March 1962 and by July 5 that year Algeria was independent and hundreds of thousands of pieds-noirs had sold up and fled to mainland France.

By August 1962 the OAS had decided de Gaulle must pay the price for this "betrayal".

On August 22 de Gaulle was in an iconic Citroen DS car being ferried to Paris's Orly airport from the Elysée Palace.

A team of assassins, who had been recruited by former French army officer Jean-Marie Bastien-Thiry, ambushed the convoy and fired 180 shots at de Gaulle's car.

He and his wife ducked down and the driver hit the Citroen's accelerator and got away but two of the president's bodyguards were killed.

Bastien-Thiry — who had acted as a lookout — was later caught and sentenced to death, although the actual gunmen were given life sentences.

At his trial he made a long speech justifying his actions.

"We exercised the right of self-defense against a man, on behalf of his victims, on behalf of our fellow citizens and on behalf of our children; this man is dripping with French blood and he represents the present shame of France. He is not good, he is not moral, it is not legal that this man remains a long time at the head of France. Morality, law, and human reason unite to condemn it. The truth that we have said, and many others that we have said before us, will remain attached to the name of this man, wherever he goes and whatever he does. One day this man will give an account of his crimes, before God, if not before men," said Bastien-Thiry.

De Gaulle turned down several appeals for clemency and on March 11, 1963, Bastien-Thiry, a devout Catholic, was executed by firing squad at Fort d'Ivry in the Paris suburb of Ivry-sur-Seine as he held a string of rosary beads.

"The French need martyrs….I gave them Bastien-Thiry. They'll be able to make a martyr of him. He deserves it," de Gaulle said later.

De Gaulle had been outraged by the attack and especially by the fact that Bastien-Thiry had hired three Hungarians to carry out an attack on the head of the French state on French soil.

Great Idea For A Novel

In 1971 British journalist and novelist Frederick Forsyth's thrilling novel The Day Of The Jackal was published.

The novel, which was turned into a hit film three years later, was a fictionalized version of the attempted assassination of de Gaulle.

The book includes Bastien-Thiry's assassination attempt but climaxes in 1963 as a sniper, known only as The Jackal, makes another bid to kill de Gaulle.

De Gaulle was the target of around 30 assassination attempts during his lifetime.

In 1968, after violent strikes and demonstrations shook France, the elderly de Gaulle stepped down as President and died two years later.