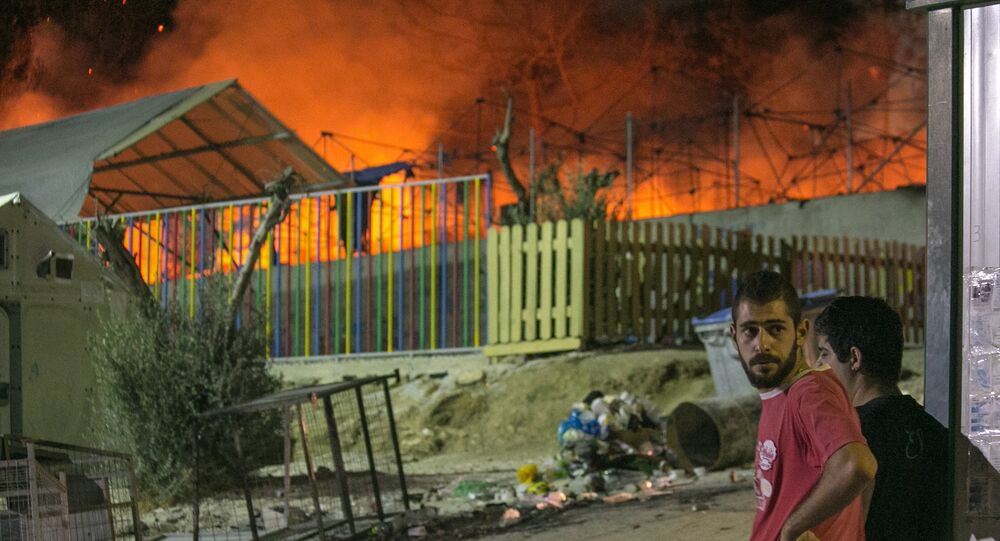 The Moria facility on the Greek island of Lesbos in the Aegean Sea hosts more than 12,000 migrants, which is said to be over four times its stated capacity. The camp has often been criticised by aid groups for its poor living conditions.

A fire has broken out at the Greece's Moria migrant camp on the island of Lesbos on Wednesday morning, according to fire brigade officials cited by Reuters.

​Some 25 firemen with 10 engines, aided by volunteers, were battling the flames, which swiftly spread both inside and outside the main compound, said a fire brigade official, who added that the migrants were being taken to safety. Makeshift shelters in the nearby olive groves were also said to be on fire.

„It is the night that #Moria is burning to the ground,” says one friend. “I am standing in the flames and yet I cannot believe, what is happening in front of me.”

This video is filmed by him and sent just now. pic.twitter.com/qTEScei7SJ

​There have been no reports of injuries so far.

Reports say wildfires burning in two other areas on Lesbos are being fanned by strong winds. An investigation is underway to determine what caused the incident, with no explanations offered so far.

Hell on earth tonight in Moria, everything is burning ... pic.twitter.com/EcRx6xvrIp

​People were leaving the camp, carrying their luggage in their hands, according to cited witnesses.

The Moria facility hosts more than 12,000 people, and has often been the target of criticism for its crowded living conditions.

Last week the camp was placed under quarantine after an asylum-seeker tested positive for COVID-19, with confirmed cases of the respiratory infection rising to 35 since then.

Amid the coronavirus pandemic, all migrants reaching the island by boat have been quarantined away from the camps.

Inside the crowded Moria camp itself, aid groups have noted the impossibility of enforcing the social distancing protocols necessary to curb the spread of the disease.
The implementation of basic hygiene measures also reportedly presents a challenge at the facility.

Located just off the Turkish coast, Lesbos witnessed a massive influx of refugees and migrants seeking to reach mainland Europe in 2015-2016.

In March 2016, an EU-brokered accord with Turkey all but halted the migrant flow to Greece, as Ankara promised to restrain the flow of arrivals into the bloc, while Brussels pledged to provide funds to help Turkey take care of the refugees.

© AP Photo / Darko Bandic
Migrants gather in Edirne, near the Turkish-Greek border on Sunday, March 8, 2020. Thousands of migrants headed for Turkey's land border with Greece after President Recep Tayyip Erdogan's government said last week that it would no longer prevent migrants and refugees from crossing over to European Union territory.

The situation with asylum seekers along the Greek-Turkish border escalated in late February, when Ankara announced that it had opened its border with the EU to migrants and refugees, following an increase in tensions in the Syrian province of Idlib.

Turkey claims one of the reasons for its move was the lack of assistance from Brussels in dealing with the flow of migrants.