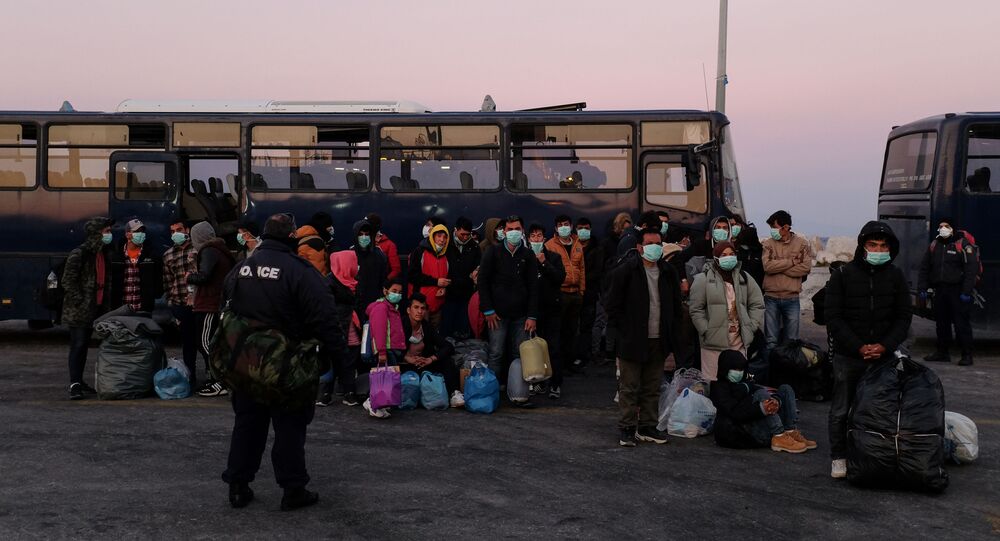 In late February, Turkish President Recep Tayyip Erdogan announced that Ankara would no longer stop the flow of refugees fleeing to Europe due to the clashes in Syria's Idlib.

Greece is bracing itself for an inflow of refugees from Turkey after images released by the Colorado-based space technology company Maxar Technologies appeared to show Ankara releasing tens of thousands of migrants from its deportation centres, The Times reports.

“We have noticed some suspicious movements. As a result, we have ordered a heightened alert for the next few days during the Easter holiday”, the newspaper cited an unnamed senior Greek government official as saying on Monday.

The satellite imagery comes amid intelligence reports indicating that refugee groups are allegedly moving from Turkey’s inland areas to the country’s western shores which are traditionally used by traffickers for smuggling migrants to remote Greek islands located less than a few kilometres away.

© Photo : 020 MAXAR TECHNOLOGIES
A satellite image shows people at a border crossing that leads towards Greece

The report comes a few days after the Greek newspaper Kathimerini quoted unnamed sources as saying that numerous migrants had been concentrating in Turkey’s western seaside towns, "as if ready to cross into neighbouring Greece’s islands”.

The sources claimed that the Turkish police have been regulating the movement of migrants from remote inland areas to the Turkish shore, ostensibly planning to push the coronavirus-infected refugees to cross into Greece and other parts of Europe.

The US new outlet VOA, in turn, reported increasing patrols by Greece’s coastguard, Air Force, and Navy to keep an eye on the Aegean waterway dividing Greece and Turkey, in anticipation of what the Greek military described as an organised attempt by Ankara to send thousands of migrants to Europe. According to VOA, it remains unclear whether those asylum seekers are infected with COVID-19.

World Health Organisation (WHO) estimates indicate that Turkey has over 52,167 confirmed COVID-19 cases, with the death toll standing at 1,101. In Greece, more than 2,081 such cases have been registered, including 93 deaths from the disease, according to the WHO.

The developments come after Turkish President Recep Tayyip Erdogan called on Greece in early March to "open the gates" to migrants, “be free of this burden”, and “let them go to other European countries”.

The situation with asylum seekers along the Greek-Turkish border escalated in late February, when Ankara announced that it had opened its border with the European Union to migrants and refugees following an increase in tensions in the Syrian province of Idlib.

Turkey insists that one of the reasons for the move was the lack of assistance from the EU in dealing with the flow of migrants. Under a 2016 Turkey-EU agreement, Ankara promised to restrain the flow of migrants into the bloc, while Brussels pledged to provide funds to help Turkey care of the refugees.