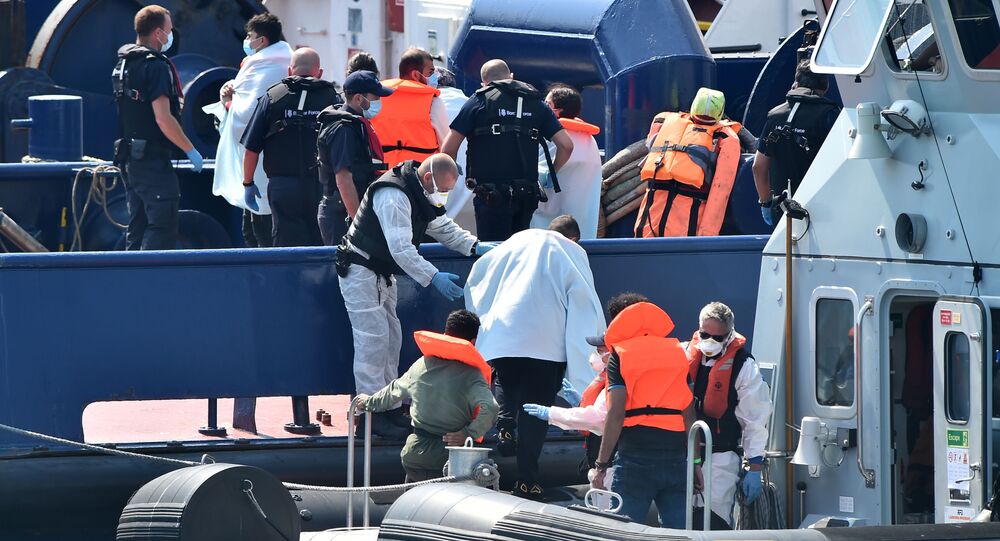 British Prime Minister Boris Johnson has been urging tougher measures to deal with a recent surge in illegal immigrants to the UK, as nearly 5,000 migrants have crossed the Channel into Britain in small boats so far in 2020, over double the number registered in 2019.

UK Prime Minister Boris Johnson has defended the government’s approach to tackling the huge surge in illegal migrants crossing into the country across the English Channel, reports The Sun.

“It is absolutely right that we seek to remove migrants who have travelled through a safe country and have no rights to remain in the UK… And our efforts to facilitate legal returns are often frustrated by individuals and lawyers putting in last minute claims,” a spokesperson for the Prime Minister was quoted as saying.

Statistics showed that around 1,500 illegal migrants arrived in the UK by small boats in August alone, with 7 August marking a record daily number of around 230 embarking on the journey, the spokesman added:

“Over recent months we’ve seen an unacceptable increase in small boat crossing from France to the UK. We are working with the French to stop these dangerous journeys, which are facilitated by criminal gangs for money and see people attempting to cross one of the busiest shipping lanes in the world.”

As the UK government struggles to rise up to the challenge of keeping a rising wave of illegal arrivals across the Channel at bay, Boris Johnson has been calling for tougher measures to deal with the issue.

“Anyone genuinely claiming asylum should do that in the first country they reach in Europe,” Conservative MP Tobias Ellwood was cited as saying by Sky News.

It was reported that the British Army has deployed a Watchkeeper WK450 reconnaissance drone in the English Channel to feed into efforts to watch out for migrants coming from France, wrote The Times, citing a Ministry of Defence (MoD) statement.

© AFP 2021 / DENIS CHARLET
Policemen stand guard next to truck queuing to board a ferry to Great Britain to prevent migrants to reach the UK illegally, on September 10, 2014 in the French port of Calais

This comes as Home Secretary Priti Patel has urged Border Force officials to carry out a review of defences in the strait, following calls to engage the Navy in tackling the crossings.

“Priti has ordered a review into our maritime assets in the Channel, and our presence obviously needs to be increased,” a Home Office source was quoted as saying.

The situation with illegal migrants has increasingly strained ties between France and the UK, with officials on both sides of the channel engaging in verbal hardball.

Earlier this month, UK Home Secretary Priti Patel sparked a minor diplomatic spat after reportedly saying at a closed event that migrants making their way from France to the UK across the Channel were doing so because “France is a racist country.”

Patel was also reported as warning French authorities that the estimated £30 million in aid requested by them to deal with the migrant problem would not be granted unless the French side improved its efforts to stave off the tide of arrivals.

Mayor of Calais Natacha Bouchart accused Britain of a “declaration of maritime war” over proposed moves to send in the Royal Navy to deal with matters, according to The Daily Telegraph.

“We in Calais no longer want to be permanent hostages enduring the lectures of British leaders,” she said.

© AFP 2021 / Philippe Huguen
Young migrants paint a sheet of paper with the lettering 'I love UK' in the 'Jungle' migrant camp, in Calais, northern France, on October 31, 2016, during a massive operation to clear the squalid settlement where 6,000-8,000 people have been living in dire conditions.

Nevertheless, in an attempt to deescalate tensions, British Immigration Minister Chris Philp on 11 August that the UK and French sides had “reaffirmed our unshakeable shared commitment” to make sure the route across the channel was “unviable”.

To date, close to 5,000 migrants have crossed the Channel into Britain, which is double the approximately 1,800 who entered the country using the Channel in 2019.