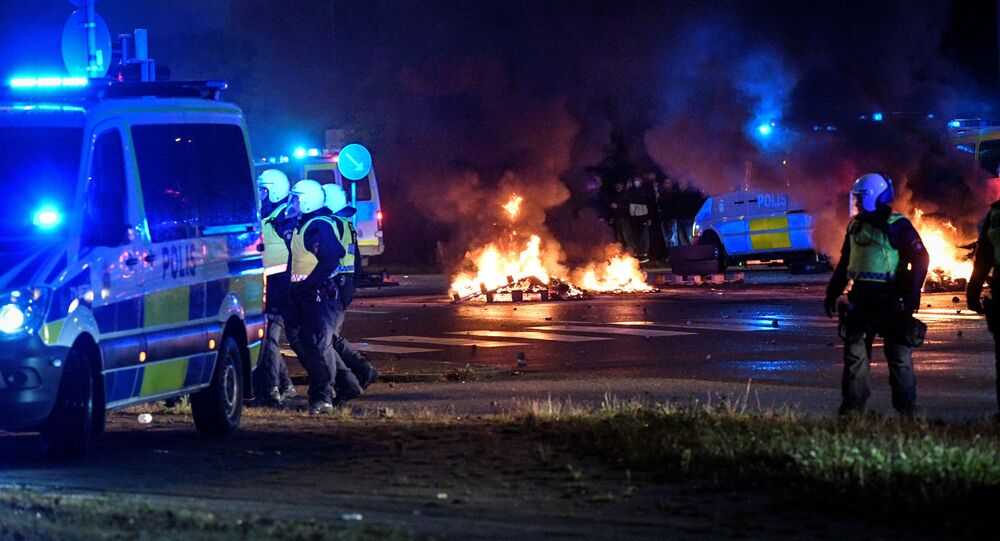 Hard Line party leader Rasmus Paludan slammed the Swedish authorities' efforts to ban the Quran-burning as attacks on freedom of expression, as well as the passivity of the Swedish police that allowed violence to escalate, and pledged further demonstrations.

Following the riots that engulfed the Swedish city of Malmö after a group of Danes associated with the anti-Islamic Hard Line party burned a copy of the Quran, its leader Rasmus Paludan has pledged that Quran burnings will continue until rioters learn how to behave in a civilised society.

Unperturbed by the bout of riots and arsons involving hundreds of Malmö's Muslims offended by Hard Line's incendiary move, the party pledged to burn another Quran in the very same Rosengård district, which is an ethnic enclave where the majority of the population are of immigrant descent.

“To all the rioters and rapists in Rosengård: soon we will burn another Quran,” the party wrote on its Facebook page.

The party leader Rasmus Paludan, who originally intended to burn the copy of the Quran himself, but was banned from entering Sweden for two years as a “serious risk to national security”, reprimanded the Swedish police for lacking objectivity, being too soft and allowing violence.

Paludan went so far as to accuse the Swedish law enforcement of running Islamists' errands and functioning as “sharia police”.

Furthermore, he slammed the Swedish authorities' attempts to stop the Quran-burning as “overplayed”, criticising them as obstruction of freedom of expression and assembly.

Paludan predicted a grim future for Scandinavia, given the brewing strife between what he sees as the freedom of expression and Islamism.

Nevertheless, he pledged to continue Quran-burnings on Swedish soil.

“Because many Rosengård residents haven't learned how to behave in a civilised Western society, we must burn Qurans in Rosengård until they understand it,” Paludan concluded.

On Friday, Malmö erupted into violence, with several hundred people gathering to protest Hard Line's anti-Islam activities by throwing objects at the police and burning car tyres. During the weekend, the riots continued in the town of Ronneby in Blekinge County.

© REUTERS / TT NEWS AGENCY
A burnt out light truck is seen in Rosengard after Friday's night of riots, in Malmo, Sweden August 29, 2020

Paludan is a Danish lawyer-turned-politician who founded the ethno-nationalist Hard Line party in 2017 and is known for making anti-Muslim videos on YouTube. These feature him burning the Quran, at times wrapped in bacon, which he celebrates as a tribute to free speech. Paludan's advocated policy of banning non-Western immigration and deporting Muslims from Denmark almost won his party their first-ever parliamentary seats in the 2019 election; he himself landed in mortal danger due to attacks and assassination attempts.