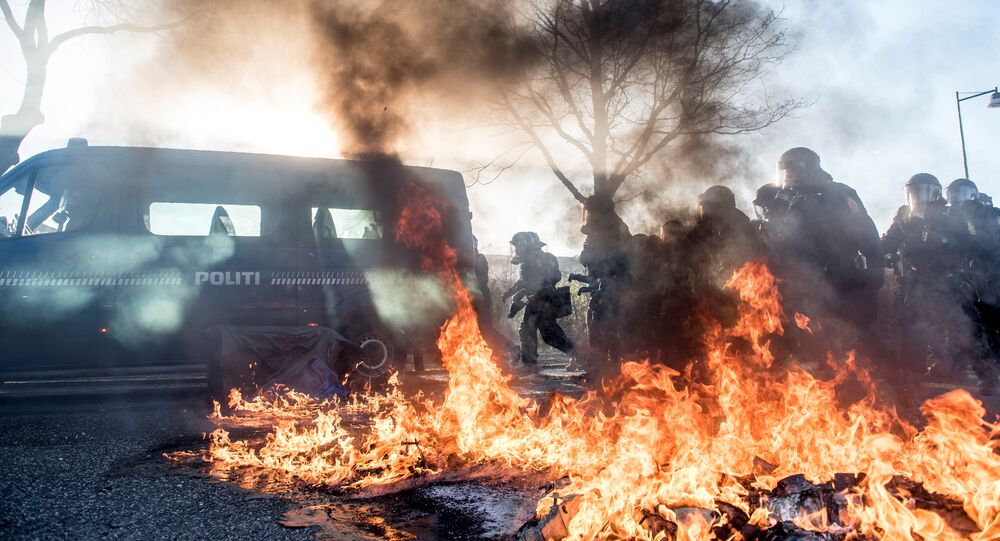 Violent immigrant riots triggered by nationalists' protests have engulfed the Copenhagen district of Nørrebro with street fires and involved skirmishes with the police. While at least 23 people were arrested, the right-wingers intend to hold a similar demonstration later on Tuesday.

A manifestation by Rasmus Paludan, the leader of the right-wing anti-Islam and anti-immigration party Stram Kurs ("Hard Line") has led to mass unrest with street fires, tear gas and stones hurled at riot police.

A longer movie clip that the party itself has published on its YouTube shows how an African man suddenly attacks Paludan, but gets incapacitated by the police. This happened after the party leader and his associate threw about the Quran, the holy scripture of Islam.

From there, the violence escalated. Images published by the daily newspaper BT show masked police with their weapons drawn. BT described how immigrant youth started throwing parked bicycles on Nørrebrogade Street to block the traffic.

"Cafe benches are lying on the site, because people have rushed away from there", BT reported.

Other clips show the police being attacked, the streets ravaged by flames and black some rising over rooftops. Another clip described the encounter as "war between police and Muslims".

​Following the unrest, 23 people were arrested.

​By his own admission, Rasmus Paludan remained unperturbed by the attack and intends to hold a similar demonstration in Nørrebro at the same square.

"We were not able to do it yesterday. I could only stand there for two minutes and 43 seconds before it all went to hell", Paludan explained. "Then we were led away by the police. You can see that cops pull me by the arms. It's not that I voluntarily left the place", he pointed out.

While many politicians, including Danish Prime Minister Lars Løkke Rasmussen, called Paludan's actions as a "senseless provocation" intended to stoke division and demolish a sense of belonging, Paludan himself denied the accusations.

"It seems to me as if some people just wanted to set the district on fire. Then they just use me as an excuse", he said.

Stram Kurs is a fringe party that identifies as "ethno-nationalist", "libertarian" and "Danish patriots". Despite only being founded in 2017 and enjoying a limited membership, the party repeatedly makes headlines in Denmark with its protest actions, which often involve symbolic Quran burnings made possible after the repealing of Denmark's age-old blasphemy law. The party describes these actions as "Bacon a-la Quran".