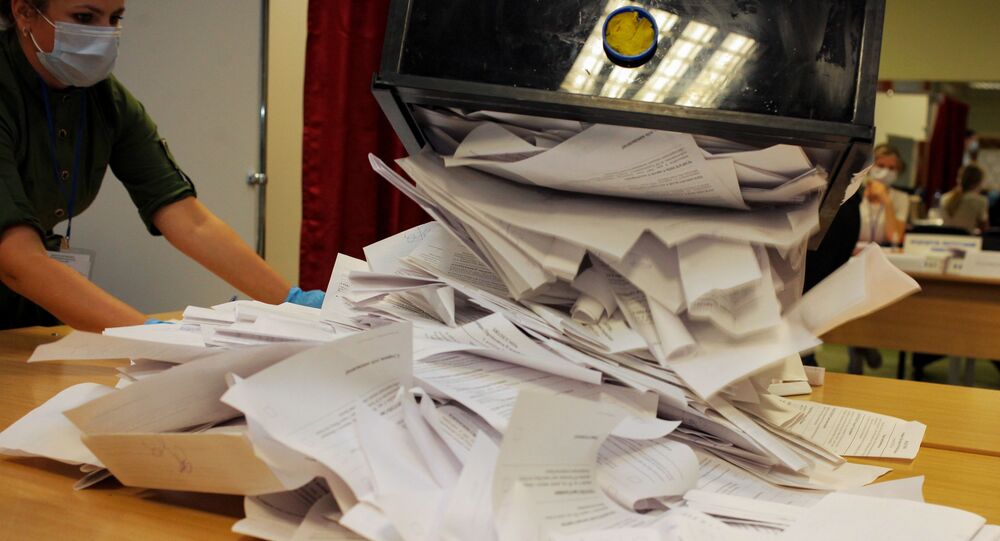 Belarus was engulfed in a wave of protests following the August 9th presidential election in which incumbent Alexander Lukashenko comfortably secured a sixth term. Opposition candidate Svetlana Tikhanovskaya refused to accept the results, accused Lukashenko of fraud, and demanded that he begin negotiations on a ‘peaceful transition of power’.

Pro-opposition election monitoring organization Golos (lit. ‘The Voice’) has published its final report on the August 9 presidential election, appearing to suggest that President Lukashenko won with roughly 61.7 percent of the votes at polling places where monitoring took place.

The report’s figures, based on data collected by US-backed civic youth organization Zubr ‘Bizon’ and Chestniye Lyudi (‘Honest People’), an election monitoring group established by a group of programmers, showed opposition candidate Svetlana Tikhanovskaya securing 25.4 percent of the vote, rather than the 10.12 percent as reported by Belarus’s election commission.

Lukashenko, meanwhile, was said to have won 61.7 percent, or roughly 18.4 percent fewer votes than the 80.1 percent result published by the election commission, at polling places where protocols and photographs of ballots were taken by activists.

Golos’s figures are based on data received after the processing of protocols from 1,310 polling stations, constituting about 22 percent of the total 5,767 polling places throughout Belarus, with protocols said to cover regions across the country, including cities, towns and villages. The protocols were said to account for about 1.8 million voters, or about 32.2 percent of the 5.8 million people who cast votes.

Despite its own figures appearing to show otherwise, Golos suggests that “even the result of 61.7 percent” for Lukashenko “cannot be considered reliable” due to alleged “revealed falsifications” at polling stations, and the fact that the president would need to have “a fantastical 88.85 percent” at the remaining 4,457 polling stations if the 61.7 percent result was correct.

The methodology of Zubr and Chestniye Lyudi’s counting has not been independently verified, and stands at odds not only with the official results, but with earlier opposition claims that Tikhanovskaya amassed 80 percent of the vote. Before the election, online polling conducted by the opposition claimed that Lukashenko had only 3 percent support among Belarusians.

In its conclusions, Golos suggests that Lukashenko “cannot be considered Belarus’s legitimate president,” and that elections should be considered “invalid” due to the alleged rigging.

Lukashenko addressed the opposition’s election rigging claims last week, telling supporters at a rally in Minsk that “it’s impossible to falsify over 80 percent of the result.”

Tens of thousands of people took to the streets of the Belarusian capital and other cities across the country on election night after preliminary results were released. The demonstrations eventually grew to include people calling for calm amid brutal street fighting between police and protesters, with bystanders also drawn into the violence during the first few days. Later, both pro- and anti-Lukashenko rallies were held.

Violence during the protests has led to the deaths of three protesters, with over 200 others receiving injuries. Police say at least 103 officers have been injured, 28 of them seriously enough to be hospitalized.

Lukashenko has publicly compared the protests to events leading up to the 2014 Maidan coup d’état in Ukraine, and insisted that he would not be made to leave his post by ‘pressure from the street.' On Saturday, he put the armed forces on full combat alert after reporting an increase in NATO activity along Belarus’s western borders, which he called a form of deliberate pressure amid the current situation inside the country.

Tikhanovskaya fled to Lithuania on August 11, where she remains in self-imposed exile. She has since met with multiple European and US officials, as well as public figures such as Bernard-Henri Levy, the French philosopher known for his support for the 1999 NATO bombing of Yugoslavia, the colour revolutions in Georgia and Ukraine in 2003 and 2014, and a Libya-style NATO intervention in Syria against President Bashar Assad.

Belarus Will React Without Warning to Attempts Aimed at Violating Its Border, Lukashenko Says

Sergei Lavrov: The West Seeks to Remake Belarus in Its Own Design