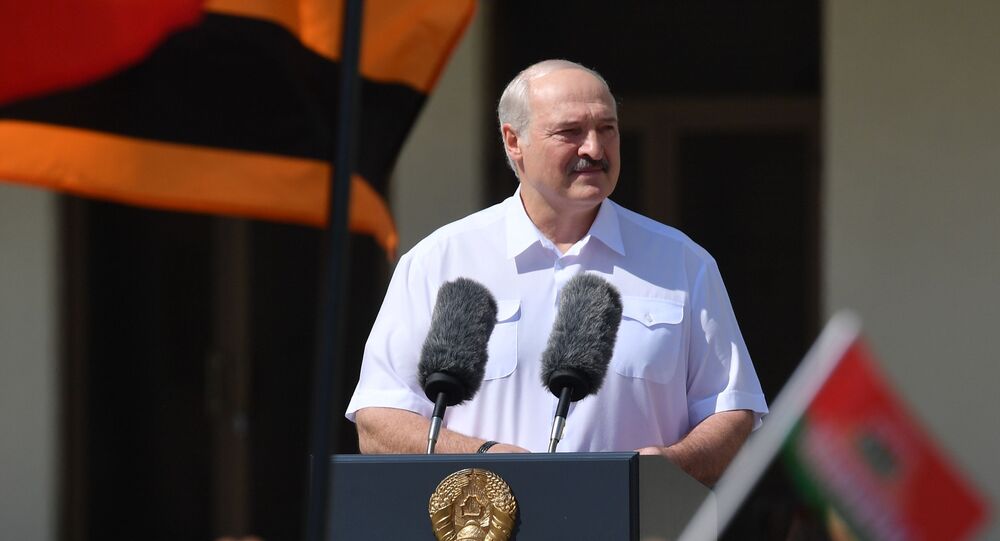 On Saturday, the Belarusian president ordered an air assault brigade to be transferred from Vitebsk region in the country's northeast to Grodno region near Belarus's borders with Poland and Lithuania after expressing concerns about increasing military activity in those two NATO nations.

Belarusian President Alexander Lukashenko has given his first public address since last Sunday's presidential elections and the week of turmoil which has followed, and emphasized that he would not agree to any new round of elections demanded from abroad.

"Lithuania, Latvia, Poland and, unfortunately, our kindred Ukraine and its leadership are ordering us to hold new elections. If we agree to toe the line, we will go into a tailspin and never again stabilize our airship [of state]. We will die as a state, as a people, as a nation," Lukashenko said, speaking before thousands of supporters on Independence Square in central Minsk on Sunday. "I will never agree to the scrapping of our state. This will not happen," he stressed.

Lukashenko also warned about an alleged buildup of NATO forces, including tanks and aircraft, on Belarus's western borders.

"Look around: there are tanks, there aircraft are taking off 15 minutes from our borders. And this is not for nothing! NATO forces are clanging their tank tracks at our gates. A buildup of military power is taking place near the western border," Lukashenko said. "They [the opposition] are already being manipulated by outsiders, by puppeteers. They see the western borders of Belarus here, near Minsk, as it was in 1939, and not near Brest," he added. "This will not happen. We will become Brest Fortress. We will not give up the country."

© AFP 2021 / SERGEI GAPON
Live Updates: Lukashenko Says Air Assault Brigade Will Move to Belarus' Western Border
Addressing allegations by the opposition that he had 'stolen' the election, Lukashenko said that this was impossible, given the size of his margin of victory. "The elections have taken place. It's impossible to falsify over 80 percent of the result. This cannot happen...Who will hold these [new] elections? Who will take part in these elections? Bandits and thieves!" he suggested.

The Belarusian leader, who has been in power since 1994, and won a sixth consecutive term last Sunday, insisted that he was not clinging to his post. "I am not standing here because I have firmly grasped power. For a quarter of a century, I gave my youth and the best years of my life to serve you and our Motherland...They [the opposition] are shouting 'Go away!'. No problem, no problem. Presidents come and go...But then what? And who will we wait for here tomorrow? Who will we have to feed tomorrow?" he asked.

Lukashenko also stressed that if Belarusians want to see reforms, the government will be ready to start "tomorrow," so long as the requests are reasonable. He suggested, for example, that the state could not agree to give out 'free money' like some wealthier Western countries have amid the recent coronavirus crisis. "'Money thrown from helicopters' from thin air does not exist. That money must be earned every day, and not in the public square, but in factories and enterprises."

© Sputnik / Виктор Толочко
Demonstrators make their way into an area near the parliament buildings in Minsk to hear a speech by Belarusian President Alexander Lukashenko. Sunday, August 16, 2020.

Sunday's manifestation in support of Alexander Lukashenko was the first of its kind since last week's election and the wave of protests and clashes between police and protesters which has followed. Previously, authorities had urged the government's supporters to stay at home to avoid escalating tensions.

Protests began last Sunday after preliminary results showed Lukashenko winning over 80 percent of the vote, with leading opposition candidate Svetlana Tikhanovskaya receiving about 10 percent. The opposition conducted its own polling, alleging that the vote was rigged and that figures should be flipped, prompting opposition supporters to spill out into the streets. The week of clashes with police has led to over 200 injuries among protesters, and 103 injuries among the police, 28 of them serious enough to require hospitalization. According to authorities, at least ten officers became victims of hit and run attacks by motorists. Two protesters have also died in the violence. Roughly 7,000 people have been detained.

Earlier Sunday, the Tikhanovskaya campaign's HQ reiterated that she was ready to discuss Lukashenko's resignation and the peaceful handover of power. Tikhanovskaya fled to Lithuania on Tuesday, and has been making political demands to Minsk and Lukashenko from that country ever since. On Saturday, her team began forming a 'coordinating council for a transfer of power'. Belarusian authorities have dismissed all opposition claims to power.

© AP Photo
People with Belarusian National flag gather at the place where a protester died amid the clashes protesting the election results in Minsk, Belarus, Wednesday, Aug. 12, 2020. The demonstrators are contesting the official count showing President Alexander Lukashenko winning a sixth term with 80% of Sunday's vote, with crowds taking to the streets every night since to demand a recount.

The European Union has announced sanctions against authorities accused of "violence and falsification," with officials from the Czech Republic, Latvia, Estonia, Lithuania and Poland refusing to recognize Lukashenko's reelection and demanding new "free and fair" elections under the supervision of international monitors. The US, the UK, Canada, Ukraine, Germany and other European countries have similarly expressed concerns over the election results and protest violence.