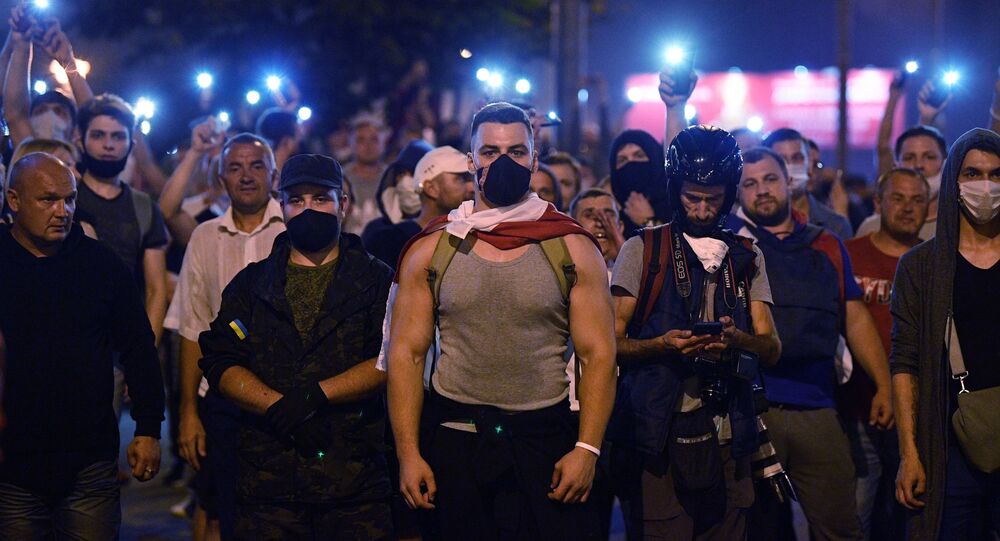 Earlier, the headquarters of Belarusian opposition candidate Svetlana Tikhanovskaya indicated that she would not recognize the results of Sunday's election, and called for a "transfer" of power "in a peaceful manner." According to preliminary results, incumbent president Alexander Lukashenko received over 80 percent of the vote.

Alexander Lukashenko has commented on the large-scale street protests in the Belarusian capital, saying he would not allow for a Ukraine-style 'Maidan revolution' to take place in his country.

"Everything I was talking about is being confirmed. If someone didn't believe it - they believe it now...I had warned: there will be no Maidan, no matter how much someone might want it. Therefore everyone needs to settle down and calm down," Lukashenko said, speaking to journalists on Monday.

According to the president, over two dozen members of law enforcement suffered injuries during Sunday night's protests. "There are broken arms and legs. They deliberately targeted them. They fought back. Why cry about it now? The response will be adequate. We will not allow for the country to be torn apart," he said.

Earlier, Belarusian news agency BELTA reported that over 50 demonstrators, as well as 39 police had been injured in the protests across the country, with unrest concentrated in the capital of Minsk. 3,000 protesters were arrested for taking part in the demonstrations.

According to Belarusian Internal Affairs Ministry spokeswoman Olga Chemodanova, protesters lit flares, threw nails and barbs onto roads, attempted to build makeshift barricades, dismantled parts of sidewalks and threw paving stones at police. One group of protesters in the city of Pinsk reportedly wielded sharpened poles and stones to attack police. Criminal proceedings have been launched against persons accused of violent behaviour.

Chemodanova stressed that lethal weapons were not used by police in their response, and described earlier reports of a fatality among protesters as "nothing but fake news."

Russian President Vladimir Putin, Chinese President Xi Jinping, and Kazakhstan President Kassym-Jomart Tokayev have congratulated Lukashenko on his reelection, with Sergei Lebedev, chairman of the Commonwealth of Independent States mission in Belarus, saying there were no issues which could call the legitimacy of the vote into question.

© Sputnik / Ilya Pitalev
Belarusian Opposition Candidate HQ Demands Peaceful Transfer of Power
Tikhanovskaya's campaign said the candidate did not recognize the results, and is demanding a "peaceful" transfer of power. Polling conducted by pro-opposition researchers suggests that Tikhanovskaya should have received around 70 percent of the vote, with Lukashenko supposedly trailing with only 15 percent.

Belarus's election campaign has been fraught with scandal and intrigue, with some would-be opposition candidates denied registration and others facing administrative pressure from the government. Late last month, Vitaly Shklyarov, an advisor to Tikhanovskaya's campaign, was arrested by authorities. Before working for her, the political scientist had worked on the election campaigns of Germany's Angela Merkel, Barack Obama and Bernie Sanders in the US in 2008 and 2016, and Russian opposition candidate Kseniya Sobchak in 2018. Tikhanovskaya herself became the candidate after her husband, Sergei Tikhanovsky, a Belarusian blogger and pro-democracy activist, fled the country. Tikhanovsky has called Lukashenko a "cockroach," while the president has accused him of being a foreign agent sponsored from abroad.