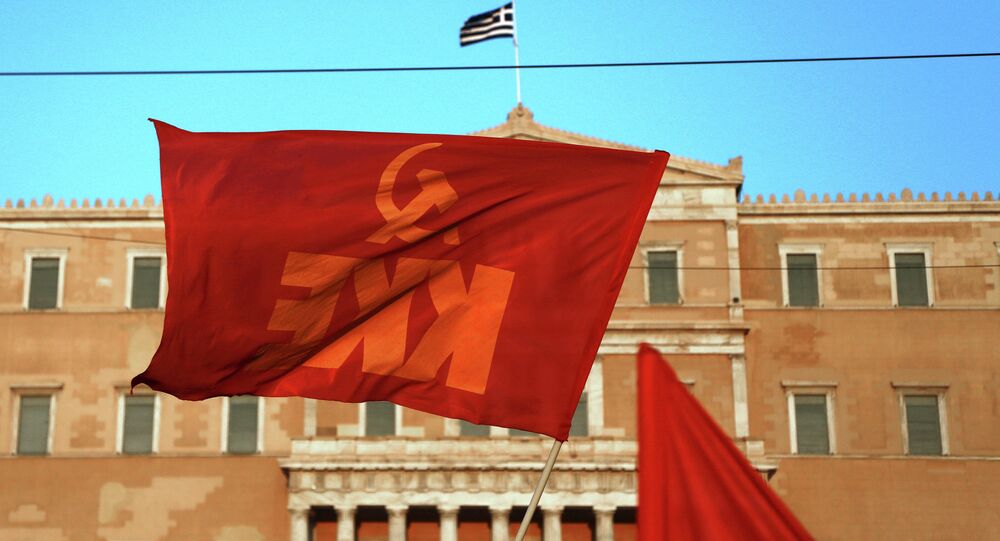 As massive demonstrations sweep Belarus following the re-election of President Alexander Lukashenko for his sixth term since he first assumed office in 1994, certain left-wing organisations in Europe have issued supportive sentiment towards the government and condemned alleged foreign meddling.

The Communist Party of Greece (KKE) issued a statement on Tuesday condemning "foreign interference" in the internal affairs of Belarus, amid rising anti-government protests across the country.

"The events in Belarus are linked to the intervention of the EU, NATO and the United States in developments and are the result of the fierce competition of these forces with Russia for control of the country's markets, raw materials and transport networks, as well as for geopolitical pillars in Eastern Europe and the wider Eurasian region", the KKE Central Committee said in a press release.

The party said that it was "ridiculous" and "provocative" that Poland and the Baltic states of the EU have been "mobilized" as a precursor to EU and US intervention for "freedom" and "democracy", in which there are "blatant violations of democratic rights and freedoms" including the repression of newspapers and the imprisonment of communists.

The KKE statement also stressed that the "solution for the people of Belarus is not to maintain the current bourgeois regime", which they described as moving in a capitalist direction.

They describe the Lukashenko government has being trapped in "intra-imperialist rivalry", highlighting the trip by US secretary of state Mike Pompeo to Minsk in February, during which he pledged his "support" for the Eastern European country.

They expressed solidarity with "the working people of Belarus" and the "independent struggle to repel the foreign interventions, to claim the satisfaction of its modern popular needs, to pave the way for socialism, which is the only alternative to the impasses of the capitalist path of development".

While the Minsk government is headed by President Lukashenko, who has sat as an independent since his first election to office in 1994, the largest single party is the Communist Party of Belarus (CPB), who maintain fraternal ties with the KKE.

Following the widely contested 2020 election results, which saw Lukashenko re-elected with around 80% of the vote, the CPB came out in support of the results and the incumbent president.

The Communist Party of Belarus is a major party in the country & successor to the soviet era organisation—they are deeply involved in industry, collective farms & have many political positions in representative bodies as well as ministerial. The CPB is internationally recognised.

​The Communist Party of the Russian Federation (KPRF) have also expressed their opposition to the protestors demanding the resignation of President Lukashenko. Describing the calls for an interim government before holding new elections a "coup d'etat", in a statement made by the Central Committee.

“We have already seen the dire consequences of a similar coup in Ukraine. This brotherly country is now in a state of national disaster with the total defeat of industry and agriculture, the collapse of education and healthcare, rampant corruption, rampant unemployment and poverty, the flight of millions of people abroad in search of work", the statement said.

The KPRF said that the destruction of the Belarusian leadership being sought by "our opponents in the West, will immediately lead to large-scale privatization, or rather, to an unbridled plundering of the national wealth of the country, the destruction of all achievements in the social sector, the emergence of paid education and healthcare, and millions of people will fall into poverty".

Among the anti-government demonstrations held in Minsk across the weekend, protestors could be heard chanting "Radio Svoboda" (Radio Free Europe/Radio Liberty) - a US government-owned broadcaster, originally to set up to promote anti-communist messages throughout the former Eastern Bloc.

​US Divide and Rule?

Tensions erupting throughout Belarus follow overtures made by Minsk to Washington at the beginning of the year.

During his visit to the country, Pompeo said that US energy producers stand ready to deliver 100% of the oil the country needs at "competitive" prices.

"I talked to President Lukashenko about tackling some of the obstacles that present American businesses for more readily and easily accessing this market and emphasised the need for a level playing field".

"I want to emphasise that we fully support Belarus's decision to make its own choices, pursue its own partnerships, and play a constructive role in the region".

In a reference seemingly to relations with Russia, the secretary of state said that Belarus should not be "forced" to be "dependent on any one partner" for prosperity or security.

While the Communist Party no longer rules in Minsk, Lukashenko's election in 1994 saw the country reverse the style of widespread 'shock-therapy' privatisation seen in the other former Soviet republic's - keeping 70% of the economy under state control.

Despite a nominal GDP of just $63.582 billion, Belarus boasts one of the lowest poverty rates in Europe and, according to the United Nations Development Programme, a Gini coefficient of 25.40 as of 2017 - making it one of the most equal countries on the continent.