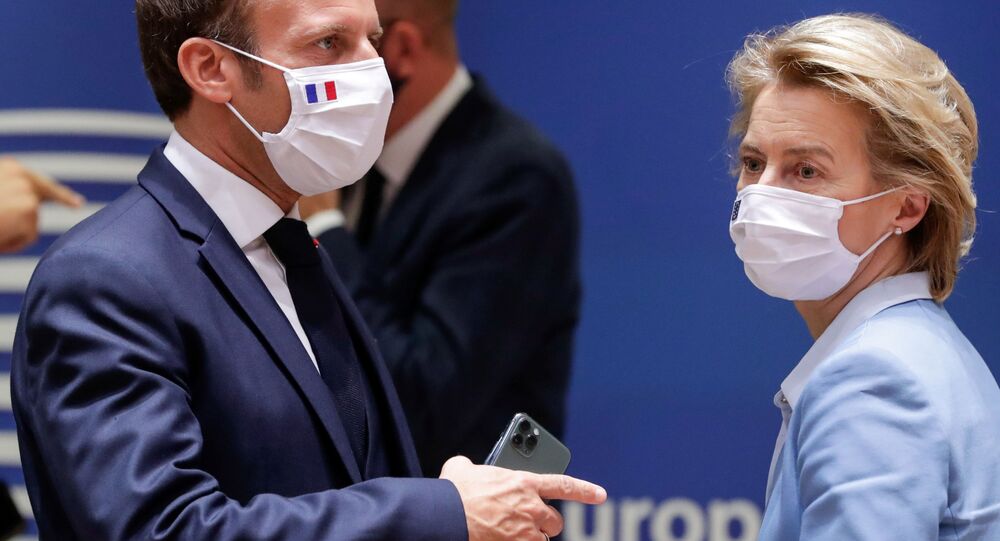 France's on a Loser, Will Gain Obligations, Not Benefit From EU Recovery Plan, Politician Says

On 21 July, after four days of intensive summit talks EU leaders agreed a much-awaited €750 billion recovery plan to tackle the crisis caused by the COVID-19 pandemic. The French Patriots' leader Florian Philippot has explained why, for France, it's too early to pop open the champagne.

"The goals of our recovery can be summarised in three words: first convergence, second resilience and transformation", stated President of the European Council Charles Michel on Tuesday. "Concretely, this means: repairing the damage caused by COVID-19, reforming our economies, remodelling our societies".

French President Emmanuel Macron, who has taken an active part in working out a solution to the bloc's economic downturn together with German Chancellor Angela Merkel, praised the development as "historic". "We have created a possibility of taking up loans together, of setting up a recovery fund in the spirit of solidarity", he emphasised.

Though Macron welcomed the "historic" EU plan, the newly-concluded agreement poses a threat to the sovereignty of European states, in particular France, warns Florian Philippot, the leader of the French Patriots party and former member of the European Parliament.

"This is largely a new method as it is about a common financial commitment; however, the concept behind it is the same and even more coercive", Philippot observes. "Subsidies will be provided to countries under the condition of implementation of the Greek scenario, i.e. neoliberal policies and austerity measures".

The extraordinary recovery effort titled Next Generation EU (NGEU) envisages that funds will be funnelled to seven programmes in the form of grants (€390 billion) and loans (€360 billion) to speed-up the recovery in member states. In addition, the bloc's member states struck a deal on a €1,074 billion EU budget for 2021-2027 aimed at reinvigorating the union's economy.

"States will not be able to use their money at their own discretion", the French politician notes. "It is about establishing total control over EU member states".

While the funds are expected to be distributed to the countries from 2021 to 2023, the bloc's member states will have to submit their national reform plans to the European Commission before receiving the first tranche. Each new tranche will require a prior validation by the Commission and a qualified majority of EU states. Besides which Brussels will implement certain oversight mechanisms to ensure that the funds are used to enact the reform pledges made by member states. To repay the loans the Commission has been planning to establish "a yield curve of debt issuance, with all liabilities to be repaid by the end of 2058", as the Financial Times specified on Tuesday.

This approach threatens to violate member states' sovereignty and marks yet another step towards the "federalisation" of the European Union, argues the French politician.

© REUTERS / POOL
General view of the empty media area in the atrium of the EU Council building on the fourth day of an EU summit in Brussels, Belgium 20 July 2020.

The Only Frenchman Benefitting from the EU Deal is Macron

Meanwhile, in the eyes of Philippot, France will be a loser at all levels as it will gain much less than other states due to the obligations it is taking on: "The funds that we will receive can be used only on a condition of austerity measures", he says. "In addition, we will pay for discounts provided to 'frugal' countries and Germany".

The so-called "frugals" – a Netherlands-led group of five wealthy northern nations – opposed the EU common financial commitment from the start and insisted on substantial cuts to the programme. As a result, the grants, which were initially supposed to total €500 billion, were reduced to €390 billion.

"Frugals" are doing in many respects better than France, Philippot remarks, explaining that they negotiated the agreement with cuts to their national contributions, refusing to pay for the countries hardest hit by the crisis.

All in all, the only Frenchman who benefits from this agreement is Macron, according to the politician: for the French president it's an ideological win, plus he got substantial media attention.

"We are moving towards European sovereignty, which Macron speaks of, but this sovereignty does not belong to the people", Philippot concludes.