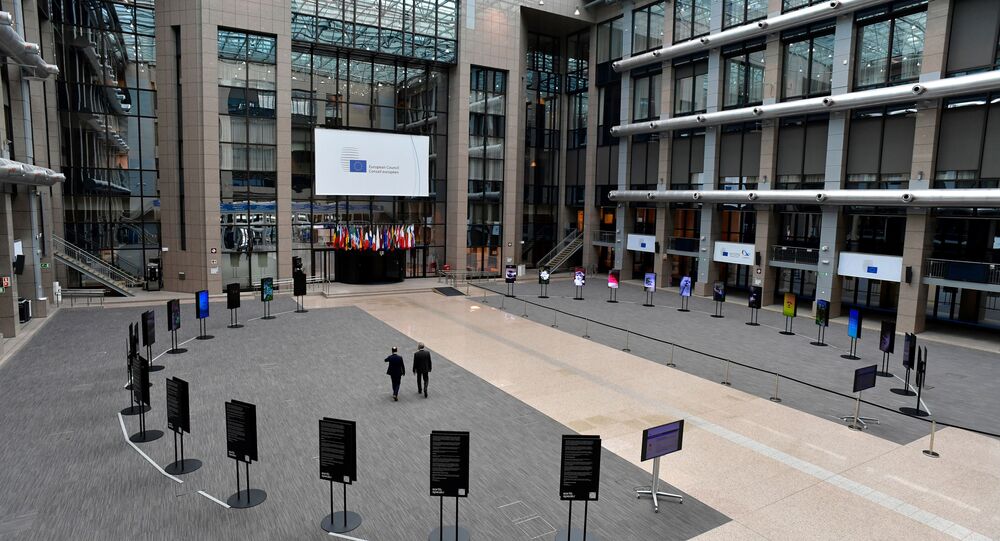 MOSCOW (Sputnik) - A deal that was sealed by EU leaders following an unprecedented five-day summit on their long-term spending plans and on a 750 billion euros coronavirus recovery fund is a "black day" for Austria and the bloc’s future, Roman Haider, an EU Lawmaker from Freedom Party of Austria, said on Wednesday.

"The result of the EU summit is a black day for Austria and the European Union. Simultaneous grow of EU debts and EU taxes will lead directly to the bloc’s bankruptcy. Only over time will we be able to assess the full extent of the additional financial burdens. What is certain now is that the EU has taken a fatal path", Haider said.

The lawmaker also recalled that ahead of the summit there were strong differences among member states on a long-term budget and a recovery fund. The so-called Frugal Four group – comprised of the Netherlands, Denmark, Sweden and Austria with Finland joining them ahead of the summit – opposed debt mutualization and wanted the recovery money to be issued in the form of loans rather than grants.

"OVP [Austrian People's Party] Chancellor [Sebastian] Kurz, with his approval of this lousy deal, broke all his promises made to Austrian taxpayers. It is a very long way from opposing ... any non-repayable grants to approving 390 billion euros in those grants. It is pure mockery of the Austrians if Kurz now wants to sell this result as a success," Haider added.

Haider believes that rebates offered to Austria and other Frugal Four group’s countries for EU budget payments is a "bogus package as well." Austria wanted to see a substantial net discount in a corresponding dimension for paying considerably more into the EU budget than getting out of it.

"Austria’s membership fee will increase from 1 percent of GDP to 2.5 percent, which is an increase from 2.9 billions to 5.4 billion euros. A proposed rebate is a drop on the hot stone! They should have negated that increase instead of accepting a rebate, that covers only half of the increased costs due to the corona package and the increase in contributions due to Brexit", the lawmaker noted.

In the early hours of Tuesday morning, EU leaders agreed on a new seven-year budget, also called the multiannual financial framework (MFF), and a COVID-19 recovery fund worth a combined 1.8 trillion euros ($2.1 trillion). The 750 billion euros of recovery money will be financed by the European Commission borrowing directly on financial markets, with the debt burden shared by all EU states. This means net contributors to the EU budget will be effectively paying more while net receivers will get even more than before. The commission's debt is expected to be repaid by 2058.

According to the deal agreed upon by EU leaders, the bloc’s budget between 2021 and 2027 will be set at 1.074 trillion euros. Additionally, a COVID-19 economic recovery fund comprising of 390 billion euros in grants and 360 billion euros in repayable loans, will be divided among the EU’s member states.