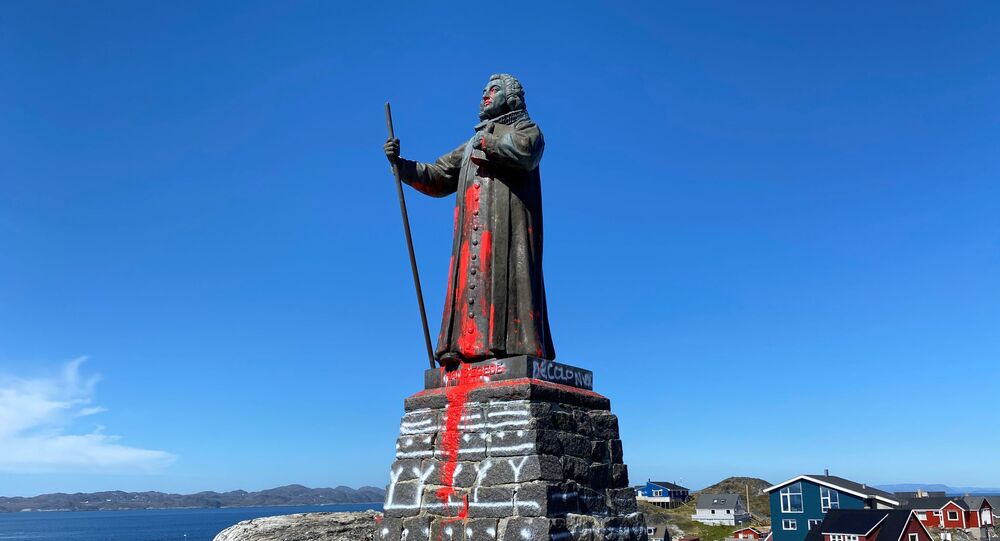 The act of vandalism against the missionary formerly venerated as "the Apostle of Greenland" who saved the island from British colonisation, follows a worldwide Black Lives Matter campaign targeting monuments to slave traders and oppressors.

A man in his early 30s has been charged with vandalising a statue of the Danish-Norwegian priest Hans Egede in Greenland's capital Nuuk, Danish Radio reported.

The statue of Egede (1686-1758), who is known for his missionary work in Greenland in the 1720s and often goes by the nickname "the Apostle of Greenland", was sprayed with red paint and "decolonise" written over it – significantly on the eve of Greenland's National Day.

Fellow activists supported this act, saying it was high time to "stop paying tribute to colonisers" and instead acknowledge the trauma of Greenland’s indigenous Inuit people.

"Many view Hans Egede as a rescuer of me and my people, but that is not the case. He was a terrible man. He did not see my people as people but as resources. We need to start telling the story from our eyes: from the eyes of the Inuit", activist and painter Aqqalu Berthelsen told TV2.

Following the act of vandalism, Greenlandic MP Aki-Matilda Høegh-Dam of the party Siumut ventured that the statue of Egede should be removed and sent to a museum.

"Hans Egede was, after all, a missionary who spearheaded the colonisation of Greenland under a Danish king. This statue stands on top of a mountain and is almost towering over Nuuk, and it ultimately symbolises colonial violence", she told Danish Radio. According to her, the act of vandalism signals that the public is "desperate" and that debate is needed.

Fellow Greenlandic MP Aaja Chemnitz Larsen from Inuit Ataqatigiit said she understood the message behind the act of vandalism, noting it revealed an "internal process" whereby Greenland needs to discuss its past.

However, historian Thorkild Kjærgaard, former head of the history department at the University of Nuuk, believes the accusation of the island's colonial past make no sense.

"Hans Egede is criticised for colonising Greenland, but he did the exact opposite. It is in fact thanks to Hans Egede that Greenland has never become a British colony and the Inuit retained their own language", Kjærgaard said, stressing that this is why Egede has been admired as a national figure in Denmark.

Egede (1686-1758) is also credited with founding the city of Godthåb, present-day Nuuk, the Greenlandic capital.

With a population of 56,000, Greenland is the least densely populated territory in the world, with an inhospitable climate and a severe lack of infrastructure between isolated coastal settlements. Despite having broad autonomy, Greenland remains part of the Danish Realm and is heavily dependent on an annual subsidy of DKK 3.5 billion ($510 million). Some Greenlandic politicians have been pushing for full independence.

The act follows a worldwide Black Lives Matter campaign that targets monuments to slave traders and colonisers. The campaign stemmed from outrage over the death of African American man George Floyd in police custody. Since then, numerous monuments ranging from British slave traders and Confederate generals to UK Prime Minister Winston Churchill and US founding fathers have been vandalised or demolished.