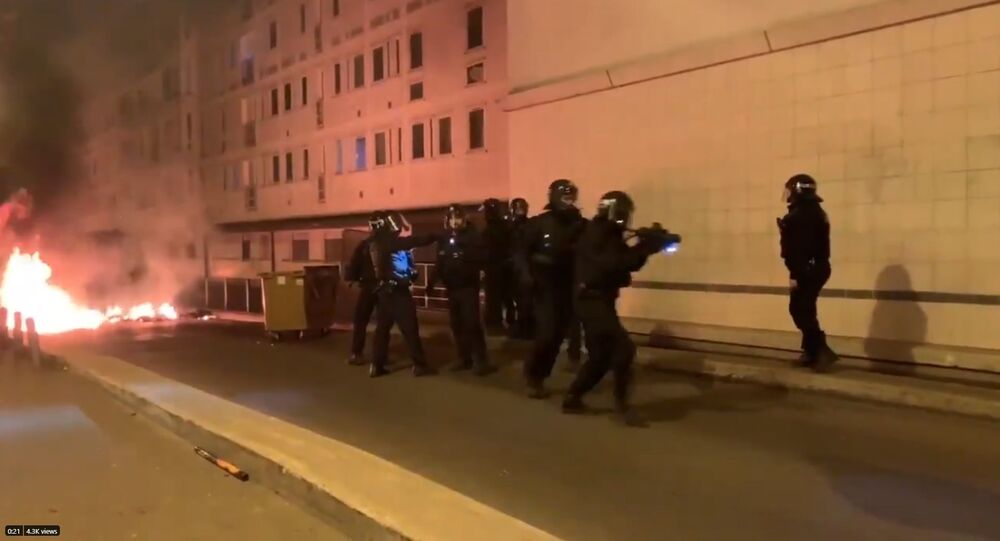 The protests in several communities located near the capital erupted over an incident between French police and a 30-year-old motorcyclist, who was severely injured after crashing into a door of a law enforcement car that was allegedly opened on purpose. The incident is currently being reviewed.

Riots continued in the Paris suburb of Hauts-de-Seine overnight between 21 and 21 April, despite the local prefectures reporting reduced levels of violence compared to other nights.

The most serious incident took place in Gennevilliers, where the Paul Langevin primary school was purportedly set on fire damaging the principal's office and two more rooms.

At the same time, authorities are not certain that the fire was related to the riots claiming that the school was outside the area where ​​urban violence took place.

As in previous nights, the protesters also launched fireworks at police forces deployed to quell the unrest. In addition to this, several cars were set on fire in the Nord department in communities of Lille, Roubaix, and Tourcoing.

This was the fourth consecutive night of riots in the Paris suburbs which started in the wake of an incident between a French police unit and a 30-year-old motorcyclist. The latter suffered a leg fracture after smashing into a police car door that was allegedly opened on purpose.

The authorities say that the police opened the door as they were about to stop the motorcyclist, who was moving at a high rate of speed, but witnesses and alleged videos of the incident suggested that the door was opened on purpose to force the rider to stop in an act of police brutality.

Brussels MP on Anderlecht Riots: COVID-19 Difficulties 'Are Not a Good Excuse to Start Riots'