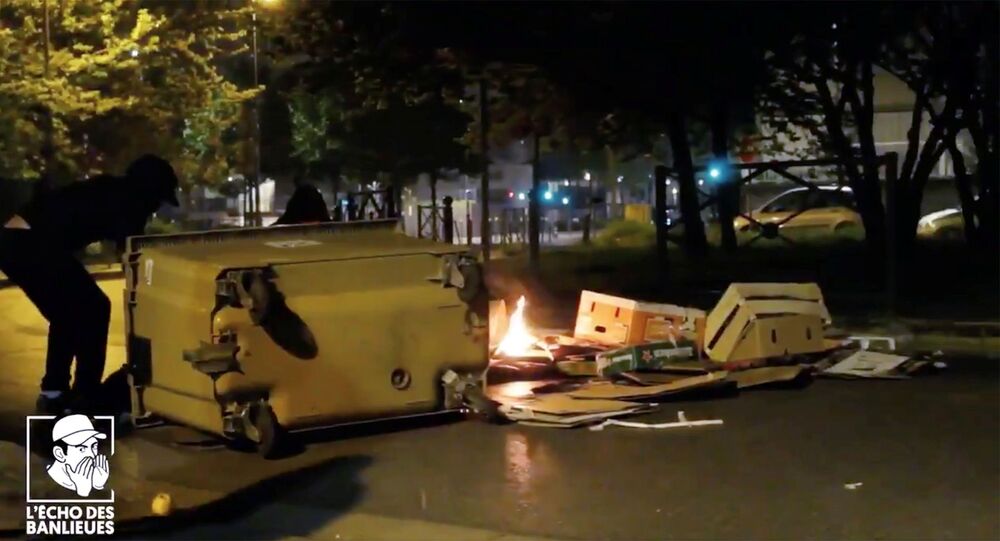 Despite being falsely reported by some media outlets as "anti-lockdown riots", in fact, the clashes started in the wake of an incident between French police and a 30-year-old motorcyclist. The latter was seriously injured under circumstances that are still being investigated.

Clashes between protesters and the police in the Paris suburb of Villeneuve-la-Garenne continued on 21 April with videos of protests showing people launching fireworks at law enforcement. The police, in turn, deployed reinforcements to deal with the disturbances.

The protests spilled over to the neighbouring communities of Asnieres, Aulnay-sous-Bois, Saint-Denis, Villepinte, and Neuilly-sur-Marne as well in some parts of the Hauts-de-Seine department - in the western suburbs of Paris. Authorities in Saint-Denis told AFP the protests that have been raging since 20 April started to calm down around 11:00 p.m. local time, adding that no actual clashes between the rioters and the police took place.

Videos purportedly from the scene suggest that the rioters set garbage bins on fire and launched fireworks in the direction of not only law enforcement, but also at firefighters, who came to put out the fires allegedly started by the protesters.

The riots, which had previously been reported as "anti-lockdown" by the British tabloid the Daily Mail, started in the wake of an incident that left a 30-year-old motorcyclist with a broken leg after colliding with an open door of a police car. The circumstances of the incident, including on why the door was open in the first place, so far remain unclear.

The authorities say that the police opened the door because they were about to stop the biker, who was travelling at a high rate of speed. At the same time, some witnesses and videos allegedly depicting the incidents on social media suggested that the door could have been opened deliberately in a bid to stop the biker.