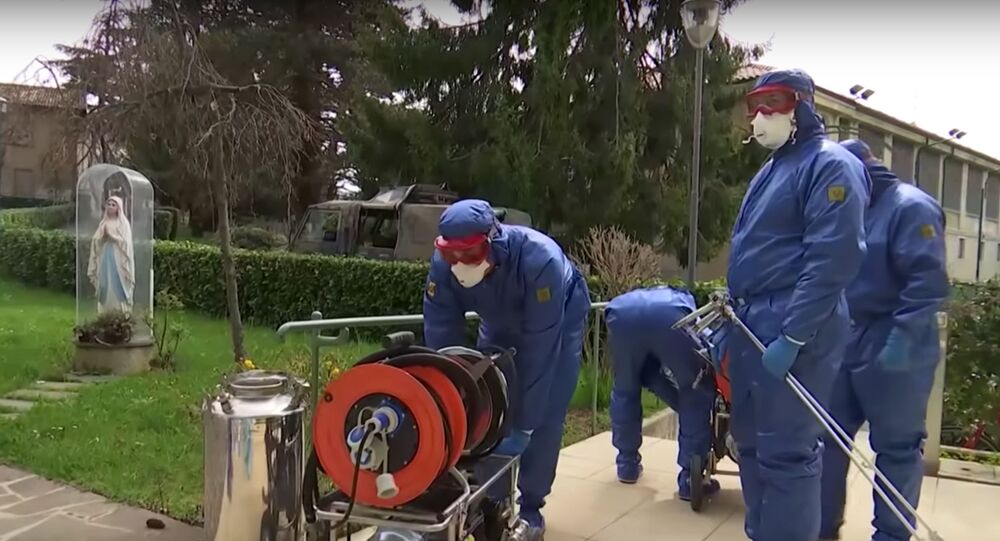 Bergamo has been the epicentre of the pandemic in the European nation with over 8,000 COVID-19 cases in a city of just 122,000 people. The total number of infections across the country currently stands at 66,414, making it third worldwide after the US and China.

Russian military specialists have already started helping Italian authorities in preventing new coronavirus infections since arriving in the country last weekend. According to the Russian Defence Ministry, they were deployed to the city of Bergamo, Lombardy, which has suffered the most from the outbreak.

Just What the Doctor Ordered

Moscow's help was met with skepticism by Italian media outlet La Stampa who called it 80% "useless", citing anonymous sources, even going so far as to suggest that the humanitarian assistance was no more than a PR stunt by the Kremlin.

This claim comes as a surprise since one of the things Italy lacked in its fight against COVID-19 is equipment to disinfect public places, transport, roads, streets, and buildings from the dormant virus, which can live outside the human body on various surfaces between 9 and 28 days. With 20 provinces affected, Rome simply didn't have enough resources to cover them all properly.

The equipment to dispense disinfectants both indoors and outdoors was one of the key pieces of humanitarian aid the Russian military delivered to Italy. Russian chemical, biological, radiological, and nuclear (CBRN) defence units brought along equipment fit to fight a biological weapons attack, not just the coronavirus outbreak. They have already started using it on the streets of Bergamo covering up to 1,000 cars, 14 kilometres of roads, and 15,000 square metres of buildings' surfaces per hour.

Mobile pieces of the CBRN units' equipment allow them to similarly disinfect inside buildings, including hospitals and morgues both of which have seen no shortage of individuals across Italy.

© Sputnik / The Ministry of Defence of the Russian Federation
Extending a Helping Hand: How Russia is Aiding Italy's Fight Against Raging COVID-19 Pandemic
12
Apart from sending CBRN units, the Russian military also brought along specialists in viral diseases, epidemiologists, and general practitioners, who have experience fighting outbreaks in different parts of the world, the Ministry of Defence said. According to the MoD, some of these specialists worked on stopping anthrax outbreaks and on developing a vaccine for the Ebola virus.

Their help comes as Italy remains one of the hardest-hit countries in the world with over 66,414 cases registered by 27 March, according to the Health Ministry. Bergamo, where Russian forces have been deployed, has 8,060 COVID-19 cases, occupying the top spot in terms of infections in Italy.