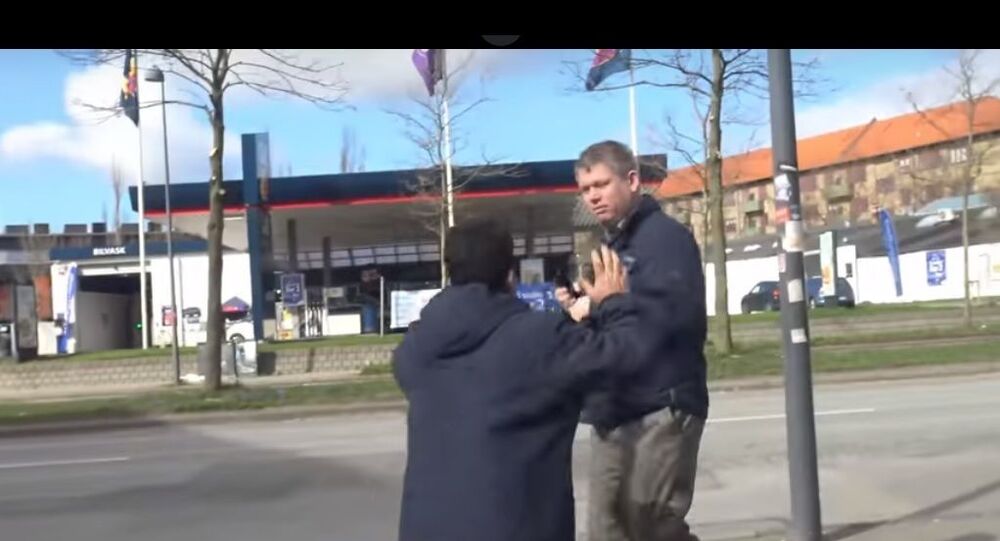 'What Are You Doing Here?': Danish Politician Assaulted Outside Mosque – Video

Hard Line party leader Paludan has been repeatedly exposed to personal attacks and attempted violence and was placed under police surveillance following estimates of mortal danger by the Danish Security and Intelligence Service.

Rasmus Paludan, the founder of the ethno-nationalist Hard Line party, has been attacked outside at mosque in Copenhagen.

In a video Paludan himself posted on YouTube, a man emerges from a car to charge straight at Paludan and attack him. The man asks “What are you doing here?” and lands several blows to Paludan's head, but is quickly subdued by men dressed in civilian clothes who describe themselves as the police.

After a violent skirmish that involves pepper spray, the attacker is incapacitated and put in handcuffs.

In the description to the video, Paludan said that he had visited the Islamic Centre at Dortheavej 43 as a journalist for Frihedens Stemme (“Freedom's Voice”, a news outlet and TV-channel edited by Paludan himself) to monitor that the ban on public gatherings above ten people due to the coronavirus outbreak was upheld. “When the TV team was about to leave, journalist Rasmus Paludan was assaulted by a violent man for no reason”, he wrote in the description.

“I went to the emergency room and was examined and given a tetanus vaccine. The perpetrator left two scratch marks on my neck. They were washed and disinfected”, Paludan later said.

Hard Line (Stram Kurs), self-described as “ethno-nationalist utilitarian” and “identitarian libertarian”, was founded in 2017 by Rasmus Paludan. The party seeks to stop all non-Western immigration and restore the country's ethnic homogeneity via mass deportations and a ban on Islam. Although almost exclusively associated with its founder, his incessant anti-Islam activism and controversial demonstrations that include Quran-burnings, the party almost made it into the parliament in the 2019 Danish general election, narrowly missing the threshold by 0.2 percent.