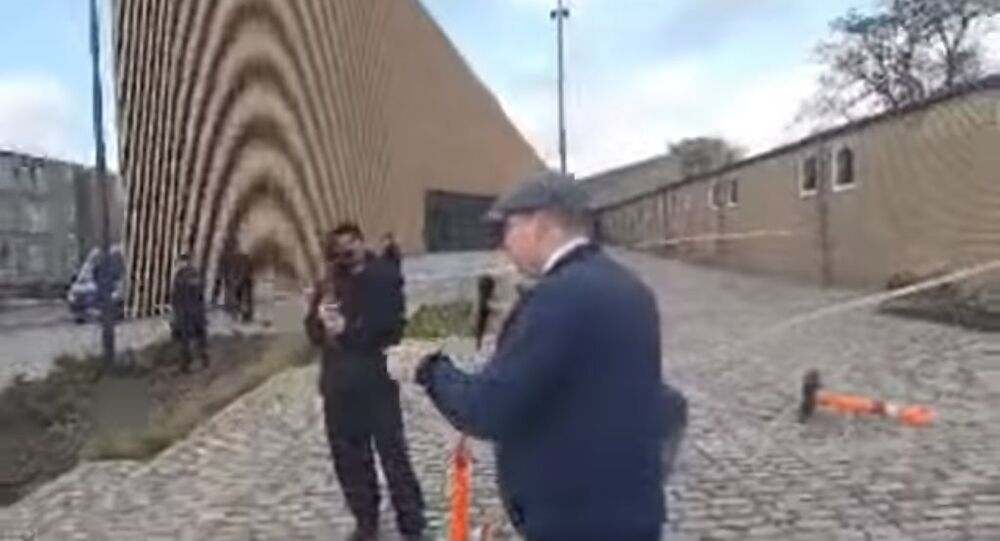 Rasmus Paludan, leader of the immigration-critical Danish party Stram Kurs (“Hard Line”), was evacuated by the police after being attacked with powerful firecrackers during a campaign meeting in the imigrant-dense area of Tingbjerg.

“He was evacuated after holding the demonstration for 20 minutes”, Leif Hansen of the Copenhagen Police told Danish TV2.

As seen in the video provided by the party himself, Paludan's speech is interrupted by powerful bangs. According to an eyewitness, the first firecracker was hurled from the roof of the building opposite Paludan. The next explosion occurred in Paludan's immediate proximity. A window pane behind the party leader was also shattered.

After the third explosion, the police did not take any chances. Officers hurried the politician away from the scene and ushered him into a waiting black BMW.

Despite the police presence, no perpetrator was arrested for the attack.

“We haven't got hold of those who did it”, Leif Hansen told Ekstra Bladet.

Stram Kurs wrote the meetings are aimed at protesting the police's failure to maintain Denmark's freedom of assembly and demonstration.

The Danish anti-migration politician Rasmus #Paludan held another of his provocative meetings in the #NoGoZone #Tingbjerg today. The police had to evacuate him after people started throwing fireworks at him. pic.twitter.com/w1NLGi7e1j

​Meanwhile, the Copenhagen Police have reportedly received information indicating that gangs operating in western Copenhagen are “directly going after” Paludan, a renowned critic of Islam and immigration.

According to police inspector Mogens Lauridsen, the threats levelled at Paludan and his demonstrations have “changed character from general trouble and unrest to that gangs may actually be targetting Paludan”.

“There is no doubt that the gang environment has a great focus on Rasmus Paludan. We have heard that no matter where he appears, the gangs will not accept his presence. That's not what we usually see. There is usually a larger division of territory, where you stick to your own”, Mogens Lauridsen told the newspaper Berlingske.

Rasmus Paludan has been attacked several times before in connection with his demonstrations in immigrant areas.

After a short pause, when Stram Kurs were unable to demonstrate in Copenhagen for security reasons, Paludan marked his comeback by burning the Quran, a recurrent feat of his, which he celebrates as the triumph of freedom of speech and religion. This past weekend, he burned the Quran in Nørrebro and Christianshavn.

​Stram Kurs was founded in 2017 and identifies as “ethno-nationalist” and would like to see, by its own admission, “a Denmark for Danes”. As the party has made a habit of burning the Quran during its public gatherings, their demonstrations have often sparked riots despite heavy police surveillance.

Rasmus Paludan advocates banning Islam in Denmark, expelling refugees, and cancelling Danish citizenship for non-European immigrants. Paludan himself has repeatedly warned against Danes becoming a minority in their own country.

In the 2019 general election, Stram Kurs went from a little-known fringe party to barely missing the parliamentary threshold.