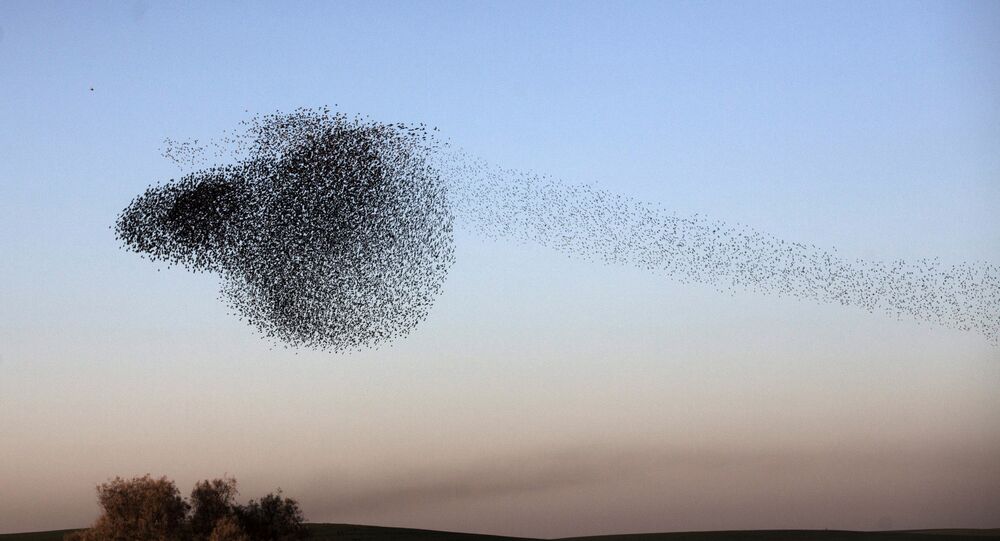 Poisoning or Mass Electrocution? Dozens of Birds Drop Dead on Motorway in Spain in Apocalyptic Scene

A Twitter user has shared footage of a motorway in Catalonia strewn with dead starlings, sparking concerns among activists, netizens, and local authorities. The mysterious mass death comes a month after an explosion in a nearby chemical factory killed three workers.

The local authorities are investigating the mysterious death of roughly 100 starlings, discovered on the C-31b motorway near a chemical factory between Tarragona and Salou in Spain. As the outlet La Vanguardia reports, rural agents have collected samples to find out what caused the deaths of the birds. There are said to be several hypotheses about what could have killed the poor creatures, namely, toxic water or an infection.

The apocalyptic footage filmed by a passing driver that later emerged online showed dozens of birds scattered on the ground. A man is heard saying: “This is happening next to the petrochemical of Tarragona, where there was an explosion recently. Dozens of dead birds on the road; call me paranoid, but this is not normal”.

The eco-activists from Catalonia (GEPEC), who published a screengrab from the video on 16 February, also pointed at the chemical polygon, where three individuals died as a result of a deadly explosion and subsequent fire in a propylene oxide tank on 14 January. They also cited witnesses "speaking of a strong smell”.

​The local emergency service 112 confirmed that they received a call from a person who reported that his partner had discovered a significant number of dead birds on the road. La Vanguardia points out that other people, who had received images via WhatsApp, also contacted them. However, as the outlet’s source noted "people, when asked, have said they did not perceive any strange smell”. The Tarragona City Council, in turn, has indicated that "at this time, there is no official record of any alteration of the air" and that they follow "the conclusions, provided by technicians”.

© AP Photo / Sergei Grits
'Terrifying Omen': Residents Shocked as Hundreds of Birds Mysteriously Drop Dead Out of the Sky
As the Daily Star points out, there is also a theory that the starlings could have been killed in a mass electrocution because they fly in close proximity to one another. It pointed at a similar case in the area in 2002, when a nearby pylon was to blame. The outlet also explains that the birds’ synchronised flying in murmuration might have led to tragic results as sometimes birds can get confused and hit the ground, for example, if there is danger from a predator. Water on the road might also be behind this as it could look like a lake, dazzling them.
...
Reddit
Google+
Blogger
Pinterest
StumbleUpon
Telegram
WhatsApp
331

Thousands of Starlings Come Home to Roost in Brighton Murmuration