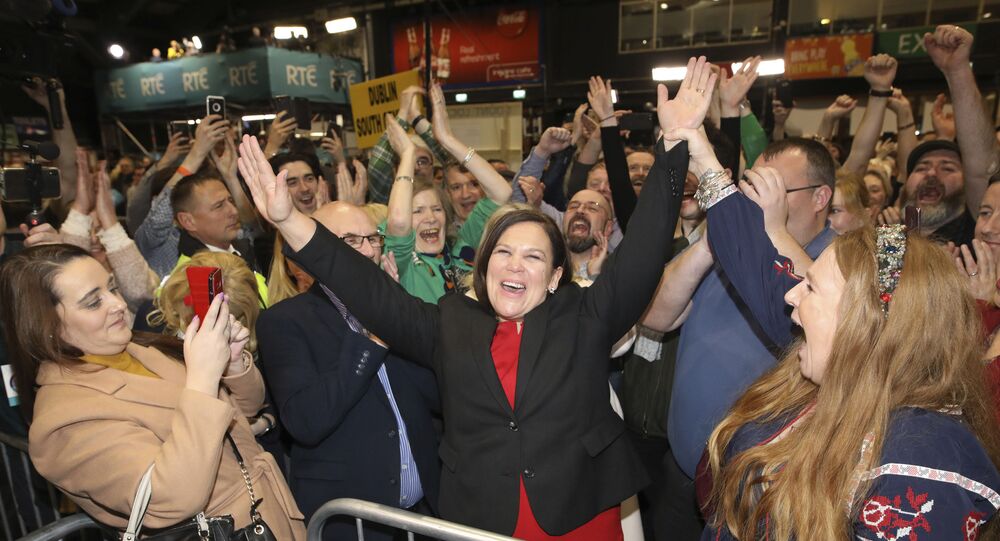 As Political Wing of IRA Demands Role in Irish Government, Writer Compares It With ‘Rise of Nazis’

Fine Gael has been in power since 2011 when its then leader Enda Kenny trounced their rivals, Fianna Fail, who fell into third place for the first time in Irish political history. But Fine Gael’s prime minister Leo Varadkar is facing defeat as the votes are counted from the weekend’s general election.

Sinn Fein, the former political wing of the Provisional IRA, have demanded to be included in the Republic of Ireland's next government after winning a record number of seats in the Irish Parliament.

Sinn Fein leader Mary Lou McDonald told RTE: "We have had a historic election. There is no doubt that the old politics of the two-party system is now gone and over, a thing of the past. This vote for Sinn Fein is a vote for Sinn Fein to be in government."

The moment Claire Kerrane won the final seat in Roscommon-Galway, becoming the first Sinn Féin candidate to be elected in Roscommon since the foundation of the state. #GE2020 pic.twitter.com/h7jPU3e2Nm

​With votes still being counted in a country which uses proportional representation, Sinn Fein have already got 36 seats, compared to 24 for Fianna Fail and 21 for the ruling party of Fine Gael.

In its election manifesto Sinn Fein said it would establish a parliamentary committee and citizens assembly to plan for Irish unity and Ms McDonald said she believed there would be a border poll within five years.

Ruth Dudley Edwards: Sinn Fein's rise akin to that of Nazis in 1930s and is a threat to democracy on this islandhttps://t.co/1Pzm2qtZQ9 pic.twitter.com/qC275ndNX9

​Journalist Ruth Dudley Edwards, in her column in the Belfast Telegraph, wrote: "This reminds many who know Sinn Fein as puppets of the IRA Army Council of Germany in 1932, when the Nazi party became the largest in parliament: Hitler became Chancellor in January 1933 and wasted no time in establishing his brutal dictatorship."

Sinn Fein doubled its vote share to 24 percent but it only put up 42 candidates, which means it is likely to end up behind Fianna Fail and possibly Fine Gael in terms of seats.

The youngest generations of Ireland's voters have legalised same sex marriage, decriminalised abortion and broken the Fianna Fail Fine Gael duopoly in about half a decade. Amazing #GE2020

​Its left-wing policies and focus on healthcare and housing chimed well with the electorate as voters expressed frustration with Ireland’s struggling health system and housing crisis.

Sinn Fein played down its links with the IRA and even its support for a united Ireland, which was not a major issue on the doorstep.

The IRA fought against British rule in Northern Ireland during The Troubles and more than 3,600 people were killed before a 1998 peace deal.

In the latter half of The Troubles Sinn Fein/IRA began to focus on the ballot box instead of the “armed struggle” and won several seats in the British Parliament, but its MPs refused to take up their seats.

Here is the moment Leo Varadkar realised he was not elected on the second count in #DublinWest.

He got 118 transfers. Peter Casey got 213.#GE2020 #GeneralElection @JOEdotie pic.twitter.com/W2SAiuYpuu

​Fine Gael and Fianna Fail have always refused to enter into government with Sinn Fein, even after the Democratic Unionist Party (DUP) shared power with them at Stormont.

Fianna Fail seems to be edging away from that refusal.

On Monday Fianna Fail’s deputy leader Dara Calleary said: "We certainly will engage with them. We're not going to refuse to talk. But let's be in no doubt that those policy difficulties and those principles are still difficult hurdles."