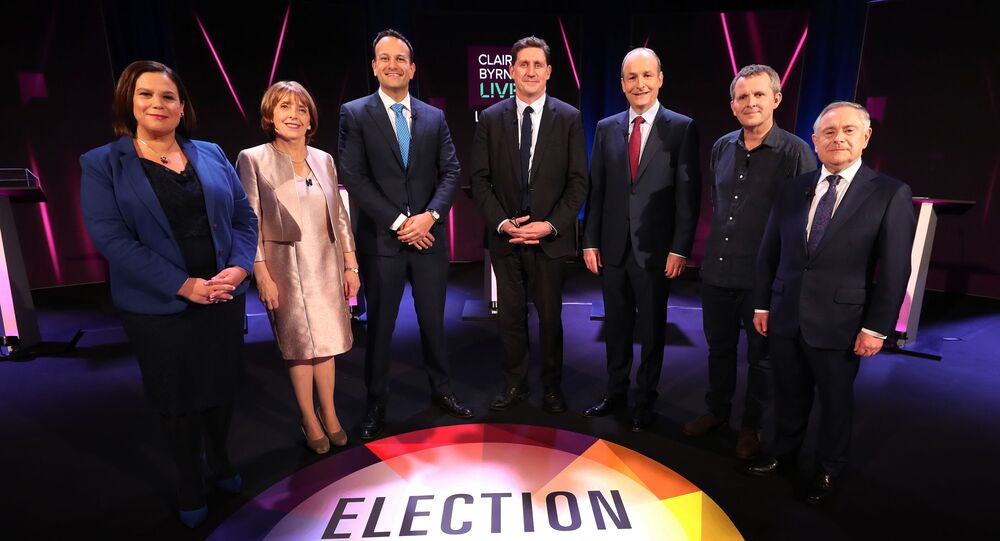 Voters in the Republic of Ireland will go to the polls on 8 February. Leo Varadkar is seeking to stay as prime minister but what is the historical difference between his Fine Gael party, the opposition Fianna Fail and the third party, Sinn Fein?

Sinn Féin leader Mary Lou McDonald has been invited to take part in a televised debate ahead of the general election in the Republic of Ireland on Saturday, 8 February.

The debate on RTE, the Irish national broadcaster, was due to involve Fine Gael leader Leo Varadkar, who is the Taoiseach or Prime Minister, and Fianna Fáil leader Micheál Martin.

But an opinion poll in the Irish Times has put Sinn Fein on 25 percent, two points ahead of Fianna Fail, with Fine Gael trailing on 20 percent and RTE said it was “mindful it has a duty to the public to reflect events as they unfold".

​So who are these three parties and what are their historical roots?

In the early 20th century the island of Ireland was part of the British Empire but the Irish had been campaigning for years for “home rule”.

During the First World War Irish nationalists launched the Easter Rising in Dublin in 1916 but were mercilessly suppressed by British troops.

Support for Sinn Fein (which means We Ourselves in the Irish language) grew dramatically after the Easter Rising and Sinn Fein won 73 of the Irish seats in the British Parliament in the 1918 general election.

​But instead of going to Westminster, Sinn Fein leader Eamon de Valera set up an Irish parliament in Dublin and formed a “provisional government” in January 1919.

That triggered the Irish war of independence between the British Army and a guerrilla band, the Irish Republican Army (IRA), led by Michael Collins.

After two years of violent conflict, London finally agreed to negotiations and accepted Ireland, with its largely Roman Catholic population, would become independent.

The news was greeted with dismay by Protestant unionists in the north of the island and Edward Carson formed the Ulster Volunteer Force, with the intention of resisting “home rule”.

Eventually Whitehall decided to grant independence to Ireland but excluded the “six counties” of Northern Ireland, which would remain within the empire.

​Under the 1921 treaty 26 counties would become the Irish Free State, remaining within the Commonwealth but becoming an independent nation.

Many Irish nationalists refused to accept the division and the Irish Civil War broke out and lasted until 1923.

The IRA was torn apart, with many members joining Collins’ Irish national army but many of their comrades taking up their arms against them in an attempt to keep the island of Ireland united.

​In August 1922 the anti-treaty forces assassinated Collins in his native County Cork but his successor, W. T. Cosgrave, began executing captured guerrillas and in May 1923 the rebels declared ceasefire.

Cosgrave founded a new party, Cumann na nGaedheal (Society of the Gaels), in 1923 and led them to victory in the post-war general election.

De Valera was released from prison in 1924 and, having broken away from Sinn Fein - which abstained from the Irish Parliament - he formed Fianna Fáil (Soldiers of Destiny), which won 44 seats in the 1927 general election.

Fine Gael was a conservative party which was often seen as representing farmers and the business community and as the Great Depression took hold of Ireland it lost ground to Fianna Fáil, which was more sympathetic to the plight of the working class and the unemployed.

De Valera led the country until 1948, when it formally became the Republic of Ireland and quit the Commonwealth.

Fianna Fáil and Fine Gael remained the dominant parties after the Second World War - which Ireland remained technically neutral in - and took turns in power.

Many Irish people do not equate the original Sinn Fein with the party of the same name which emerged in the 1970s and became the political wing of the Provisional IRA.

After the Good Friday Agreement was signed, Sinn Fein turned its focus to the Republic and stood candidates in general election, slowly gaining ground and appealing to socialists and nationalists.

Fine Gael and Fianna Fail have both become centrist parties who are in favour of free market capitalism supported by a welfare state. Policy differences are fairly nuanced.

Fine Gael has been in power since 2011 when its then leader Enda Kenny trounced Fianna Fail, who fell into third place for the first time in Irish political history.

But Fine Gael and Fianna Fail have always refused to enter into coalition with Sinn Fein, but that position could be changed if the “Shinners” - as they are often known - win the most seats in Saturday’s election.