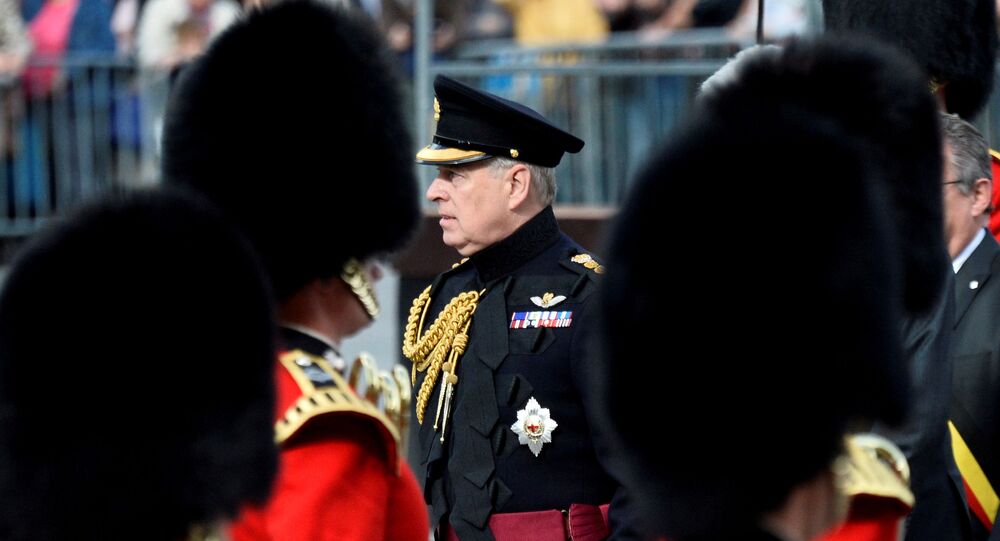 On Wednesday, Queen Elizabeth II reportedly banned Prince Andrew from meeting US President Donald Trump during his visit to the UK scheduled for next week, following the Duke of York’s reputation-damaging interview about his friendship with convicted paedophile Jeffrey Epstein.

The Times has cited unnamed UK army and naval sources as saying that due to his car-crash interview with the BBC earlier this month, Prince Andrew should be “quietly faded out’ from his honorary military positions.

The sources said that the Duke of York, who holds a total of 59 such appointments, had become “a source of derision” among the ranks in the wake of the BBC interview.

“It's embarrassing to be represented by someone like that”, they pointed out.

© REUTERS / Clodagh Kilcoyne
Britain's Prince Andrew, Duke of York, takes part in the Colonel's Review ahead of the Queen's birthday parade next week, on Horseguards Parade in London, Britain, June 1, 2019

One source told The Times that Prince Andrew should be stopped from retaining his titles, which include his position as commodore-in-chief of the fleet air arm, the admiral of the sea cadet corps within the Royal Navy and the colonel of the Grenadier Guards.

“As a service we would not be rushing to invite him to anything. It's safe to say there have been grumbles and it seems likely that the post would be passed on,” it added.

Another source asserted that there was a “mass hysteria” around his involvement with Jeffrey Epstein, and that he shouldn’t have sat down with the BBC interview because it was “stupid”.

The remarks followed The Mirror reporting on Wednesday that Prince Andrew has been banned by Queen Elizabeth II from attending a 2 December event in London to mark the 70th anniversary of NATO, where US President Donald Trump will be present, among other senior officials

Last week, Prince Andrew announced that he would step down from public duties for the "foreseeable future", because his association with convicted paedophile Epstein had become a “major disruption” to the royal family.

On 16 November, Prince Andrew gave an interview to the BBC after pressure mounted on the 59-year-old following the arrest of Epstein, who finally took his own life in a New York prison while awaiting trial on charges of running a sex trafficking network.

Queen Elizabeth reportedly did not approve of the royal’s decision on the interview, described by Prince Charles’ former PR chief Dickie Arbiter as “not so much a car crash but an articulated lorry crash”.

During the interview, Prince Andrew said, in particular, that it was a mistake to have seen Epstein after he was convicted of soliciting prostitution, but added that he did so in order to tell the financier that their friendship was over. "I felt that doing it over the telephone was the chicken's way of doing it", the Duke of York said.

At the same time, The Duke of York didn’t say that he regretted befriending Epstein, adding that knowing the financier had some "beneficial outcomes".