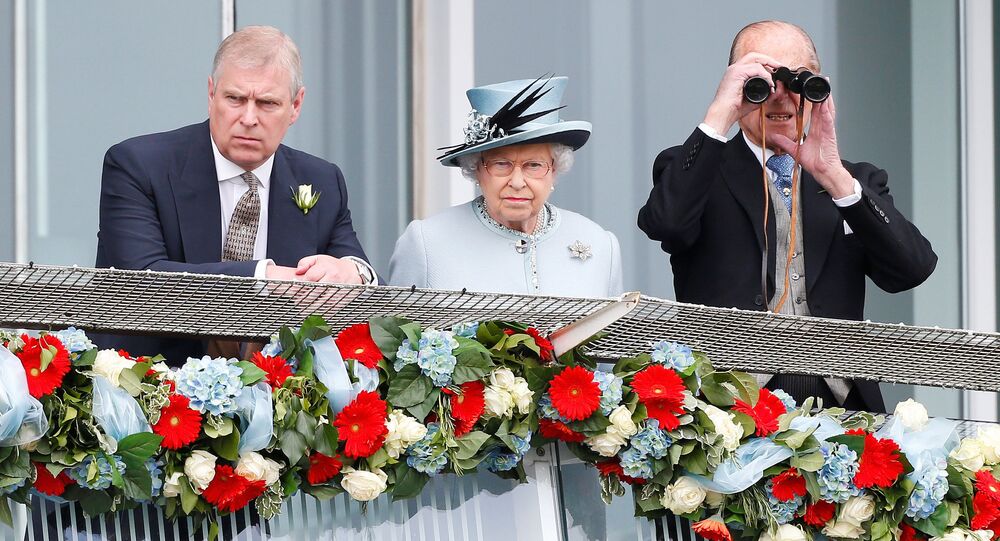 Last week, Andrew announced that he stands down from all public duties following his controversial BBC interview, during which he specifically admitted that he didn’t regret his relationship with convicted billionaire paedophile Jeffrey Epstein as it had “seriously beneficial outcomes” for him.

Prince Andrew has been banned by Queen Elizabeth II from meeting US President Donald Trump during his visit to the UK scheduled for next week, The Mirror reports, referring to the Duke of York’s reputation-damaging interview about his friendship with Jeffrey Epstein.

According to the news outlet, Buckingham Palace had not named Prince Andrew as attending the 2 December event in London to mark the 70th anniversary of NATO; Trump’s visit will be part of the event.

Being in attendance at the ceremony will be many members of the monarchy, including the Queen, the Prince of Wales and the Duchess of Cornwall, as well as the Duchess of Cambridge, the Earl of Wessex, the Princess Royal, the Duke and Duchess of Gloucester and Princess Alexandra.

Duke of York Reportedly Wants to Return to Public Work

This comes after the Daily Mail cited unnamed sources as saying that Prince Andrew allegedly intends to make a comeback to public life after clearing his name in court, but that his brother Charles wants him to retire permanently.

The sources claimed that the the Duke of York wants to repair his image by speaking to the FBI about rape allegations made against him and his ties with billionaire Jeffrey Epstein, who took his own life in a New York prison while awaiting trial on charges of running a sex trafficking network.

On 20 November, Prince Andrew announced that he would step down from public duties for the "foreseeable future", because his association with sex offender Epstein had become a “major disruption” to the royal family.

Major companies and banks, including British Telecom and Barclays, have distanced themselves from the prince and withdrawn from his Pitch@Palace project. In addition, a number of charities have also ditched him as their patron.

During his interview with the BBC, the Duke of York specifically admitted that he did not regret his relationship with Epstein as it had “seriously beneficial outcomes” for him.

The member of the British monarchy, who was photographed at Epstein’s Manhattan mansion in 2010 and accused of having sex with one of his alleged underage victims, also said that he stayed at his then-friend house for the sake of “convenience”.

Commenting on the allegations of him having sex with Virginia Giuffre (formerly known as Virginia Roberts), Prince Andrew argued that he has “no recollection of ever meeting this lady”.

Queen Elizabeth reportedly did not approve of his decision to give the BBC Newsnight interview, described by Prince Charles’ former PR chief Dickie Arbiter as “not so much a car crash but an articulated lorry crash”.