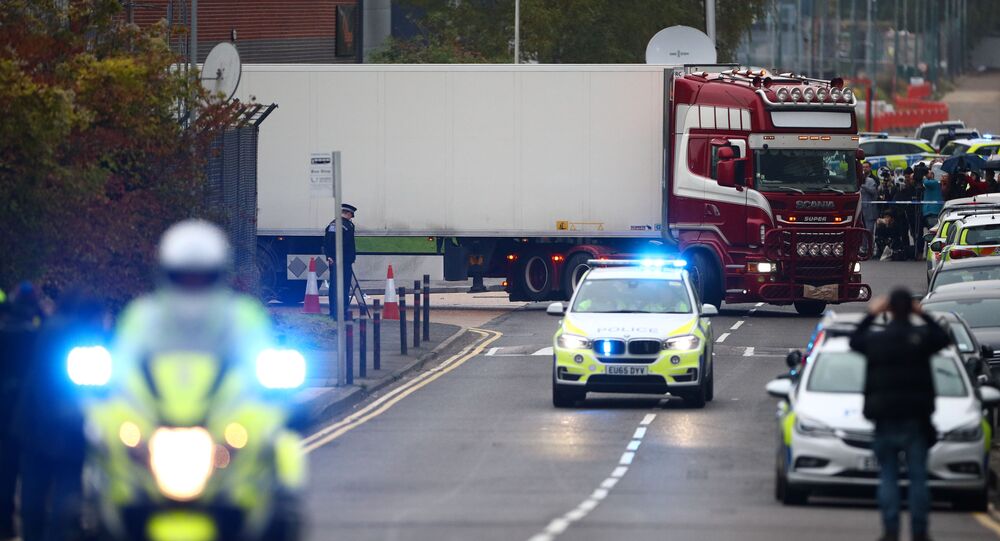 The largest mass casualty investigation in Essex Police police history saw the victims bodies found in an industrial estate in a container which had travelled from Belgium to the UK and were found in a refrigerated container in Grays, Essex.

Suspects connected to the deaths of 39 migrants smuggled into the United Kingdom said that they pretended the lorry container was filled with "cookies and biscuits", according to the Belgian federal prosecutor.

The 31 men and eight women suffocated rather than freezing to death as previously suspected, Belgian authorities said, despite not issuing an official confirmation.

A 23-year-old Northern Irish driver of the vehicle allegedly told port authorities in Zeebrugge that the 'cookies' did not need refrigeration, the Het Nieuwsblad reported on Monday as quoted by the Telegraph.

Belgian federal prosecutor Eric Van der Sypt reportedly said that a final emergency text message from a suspected victim was sent two hours before the container was received in Essex.

"We are also looking for those responsible for this drama," Mr Van Der Sypt told Belgian news.

He added: "We suspect that even more people are involved. It is quite possible that the driver did not know what he was transporting."

“He told us not to worry because he was taking an expensive route.”

The victims are believed to be both Chinese and Vietnamese nationals, according to media reports, and were reportedly part of a larger people smuggling operation involving around 100 people.

One suspect, Mo Robinson, was charged with allegedly picking up the container in Purfleet. Mr Robinson has been charged with 39 counts of manslaughter and will appear at the Old Baily on 25 November for a hearing.

Two suspects from Warrington, Thomas Maher and wife Joanna, both aged 38, were arrested in Cheshire on Friday in connection with the investigation, with another 46-year-old Northern Irish suspect arrested at Standsted Airport the same day.

The three have been interrogated on suspicion of manslaughter and conspiracy to traffic people, the Telegraph reported, with the first two released on bail whilst awaiting trial on 11 November and the latter until 13 November.

A further "person of interest" was arrested in Dublin by Irish authorities, Essex police confirmed on Monday, and is allegedly the 23-year-old Northern Irish driver who delivered the container to Zeebrugge, according to reports.

UK Home secretary Priti Patel is set to deliver updates on the situation at 15:30 GMT on Monday, the UK government has announced.

UK prime minister Boris Johnson has vowed to do everything possible to bring to justice those responsible for the deaths of the 39 victims. Mr Johnson wrote in a book of condolences on Monday that Britain "and indeed the world" were shocked by the tragedy and "the cruelty of the fate" suffered by innocent people "hoping for a better life in this country".

He added: "We mourn those who lost their lives. Our thoughts are with their families far away. In condemning the callousness of those responsible for this crime, we in the government of the United kingdom resolve to do everything in our power to bring the perpetrators to justice."