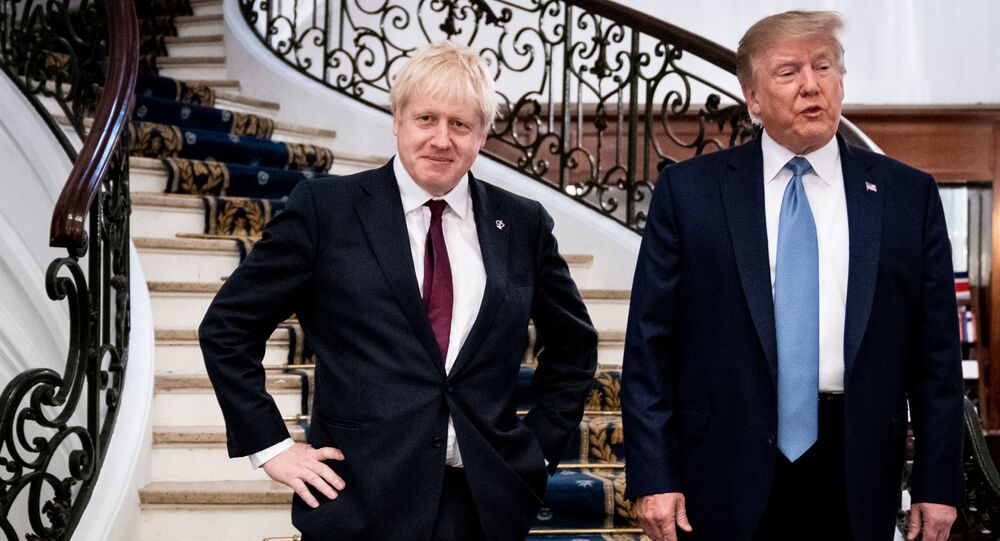 Earlier, US President Donald Trump pledged to hammer out a “very big trade deal” between Washington and London within a year of the UK’s withdrawal from the EU.

Clinching a trade deal with US President Donald Trump after Brexit will be a “very difficult” task for Downing Street, former UK Trade Minister Francis Maude told Politico on Wednesday.

He described Washington as a “difficult counterpart” in trade negotiations, warning that UK Prime Minister Boris Johnson should not expect a “massive dividend” from Trump.

Separately, he touched upon concerns about a no-deal Brexit which he said are “very exaggerated”, adding that the government would be able to resolve this scenario because it is “at its best when there is a real sense of crisis.”

“When there is a crisis Whitehall is capable of operating at very high levels of intensity. And I think what has happened since the new prime minister took office is that there is that sense of an imminent climactic moment [on] October 31,” said Maude.

The statement comes after Trump’s meeting with Johnson on the sidelines of the G7 summit in Biarritz late last week, during which the US President promised to work out a “very big trade deal, bigger than we've ever had” between London and Washington.

He also praised Johnson as the "right man" to deliver Brexit, adding that the British would lose "the anchor around their ankle" after the country’s exit from the EU.

Referring to US counterparts, Johnson told reporters shortly after the G7 summit, “they want to do [a trade deal] within a year, I'd love to do it within a year, but that's a very fast timetable.”

He predicted that such a timetable “is going to be tight", adding that he does not think "people realise quite how protectionist sometimes the US market can be".

Democratic Senator Chuck Schumer earlier berated the White House for "over-promising an unconditional and unrealistic" trade deal, adding that Washington should not be "handing out a blank cheque that bankrupts the peace, security, self-determination and shared prosperity" in Northern Ireland.

Earlier this month, Speaker of the House of Representatives Nancy Pelosi warned that any trade deal between the US and the UK will fail in Congress if Britain's withdrawal from the EU imperils the Good Friday agreement.

Signed on 10 April, 1998 by the governments of the UK and Ireland, the agreement ended a 30-year conflict in Northern Ireland between Irish republicans, who wanted a united Ireland, and pro-British unionists.

Irish Prime Minister Leo Varadkar has said that a hard Brexit could undermine the UK and pull Scotland and Northern Ireland away from London.

Johnson has repeatedly stressed that the UK would leave the EU with or without a trade deal on 31 October.