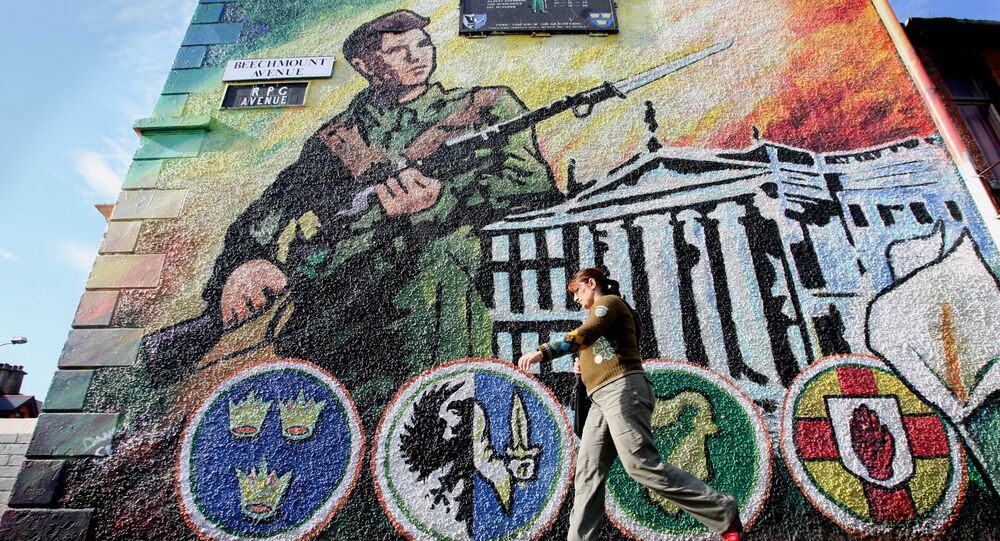 Despite it having been two decades since an amicable handshake marked the end of a sectarian conflict in Northern Ireland, paramilitary crime, political antagonism and now the divisive Brexit bombshell in the shape of a potential hard border - still pose a threat to the fragile peace deal in Belfast.

It concluded a 30-year conflict in the history of Northern Ireland known as 'The Troubles', between the pro-Irish republicans and the pro-British loyalists. Over 3,500 lives, mostly civilian, were taken during the Troubles, between 1969 and 1998.

Twenty years on, the unease over paramilitary violence and criminality is still rife in Northern Ireland.

On the eve of the anniversary, the country's three biggest paramilitary groups — The Red Hand Commando, Ulster Defence Association and the Ulster Volunteer Force — have released a joint statement condemning "all forms of criminal activity."

They said the groups could no longer be "apologists for conflict" but "advocates for change". According their statement, any members who commit crime will be removed from the organisations.

The Police Service of Northern Ireland (PSNI) Chief Constable George Hamilton welcomed the statement but expressed disappointment "that we are still in a place where there are statements about paramilitary violence and criminality."

The statement by the loyalist paramilitary groups was not what people wanted to hear on the eve of the peace agreement, according to Sinn Fein MLA Gerry Kelly.

The Party's Policing spokesperson stressed that such entities must leave the stage rather than recycle the intent to end criminality.

"There is no place for any armed groups in our society in 2018, 20 years on from the signing of the Good Friday Agreement. The public want an end to their ongoing recruitment, their procurement of weapons and an end to their existence. In the last year alone members of these groups have been involved in murder, drug dealing, extortion and intimidation, including racist attacks. We need to see leadership from political unionism to bring an end to groups like these rather than the often selective condemnation of their activities while engaging with them in cozy electoral pacts," Kelly said in a statement.

Earlier in March 2017, PSNI revealed a surge in politically motivated beatings and shootings carried out by the descendant organizations of the Irish Republican Army (IRA), supporters of a united Irish republic, and by the Protestant Ulster unionist paramilitaries who wish for Northern Ireland to remain part of the UK.

A few days ahead of the anniversary, the former leader of the Irish republican political party Sinn Fein Gerry Adams in his interview with the German publication Der Spiegel, spoke about the Troubles, the current political deadlock in Northern Ireland and the hopes for a united Ireland.

When asked whether he believes in the use of violence as "legitimate means with which to reach one's aims," Adams — who had been previously linked to the IRA but always denied being a member — replied:

"I think in given circumstances. And the circumstances at that time in the north were that people were being denied their rights."

Leader of Northern Ireland's Democratic Unionist Party (DUP), Arlene Foster, branded it a wrong message for the next generation, condemning Adams in a Twitter post:

So depressing. After everything that has happened. Wrong message for next generation. SF proves again it has no respect for PIRA victims. Taking innocent life cannot be justified. Do SF think targeting a school-bus was legitimate? La Mon? Enniskillen? Teebane? #SFdisrespect https://t.co/9Y2Xt3cXRp

There is a fine political balance in Northern Ireland at the moment, Professor of Political History at Queen's University in Belfast, Graham Walker told Sputnik in a previous interview.

The fragile peace in Belfast is tested by a number of issues, such as the legacy of the conflict, failure to restore a power-sharing government, disagreement over the Irish Language Act championed by Sinn Fein and questions over the nature of the DUP-Tory coalition.

The latest addition to the list is Brexit and its impact on the establishment of a hard border between Northern Ireland and EU member Republic of Ireland.

In January 2017 the UK Prime Minister announced Britain would leave the EU single market and customs union, which came as bad news for both Northern Ireland and the Republic.

A re-established customs border would mean tariffs on the movement of goods and services. In November 2017, Irish Prime Minister Leo Varadkar demanded written assurance from London that a hard border was not a possibility.

The DUP, largely against the hard border, also don't want to see their British identity or nationality compromised. The difference of political opinions between the pro-British DUP and the Irish nationalists, the fear of a united Ireland by unionists and the lack of clarity when it comes to Brexit aftermath imperil the stability created by the Good Friday agreement.

Earlier in March this year, Ireland's Prime Minister Leo Varadkar spoke in Washington at a 20th anniversary event of the peace deal. He suggested Brexit threatened the peace deal and could "drive a wedge" between Britain and Ireland.

"To me, Brexit is a threat to the Good Friday agreement simply because it threatens to drive a wedge between Britain and Ireland, between Northern Ireland and the Republic of Ireland, and potentially between the two communities in Northern Ireland. And that's why we must do all that we can to make sure that those wedges, that that risk, does not become reality. I think for unionists — and I take no pleasure in this — it also creates risks for the union itself because it asks Scotland and Northern Ireland to leave the European Union even though the majority of people in both those countries voted not to do so."

In the EU referendum, Northern Ireland voted Remain by a majority of 56% to 44%.

Following months of negotiations, with suggestions of a comprehensive trade deal and a special arrangement for Northern Ireland, no agreement has yet been struck between Britain and the European Union. If the UK comes up with other solutions — according to last week's statement by EU's chief negotiator Michel Barnier — "we are ready to study and to work with them."

According to a recent poll by company Lucid Talk, faced with a "hard Brexit", 48% in Northern Ireland would vote for a united Ireland and to remain inside the EU, and only 45% would choose to stay with Britain and leave.

Since according to the Good Friday agreement, Northern Ireland's future is to be determined by the wishes of the majority, the threat of the hard border triggered by Brexit could put back on the table a potentially explosive and divisive issue of united Ireland, endangering the peace deal that has now lasted for two decades.