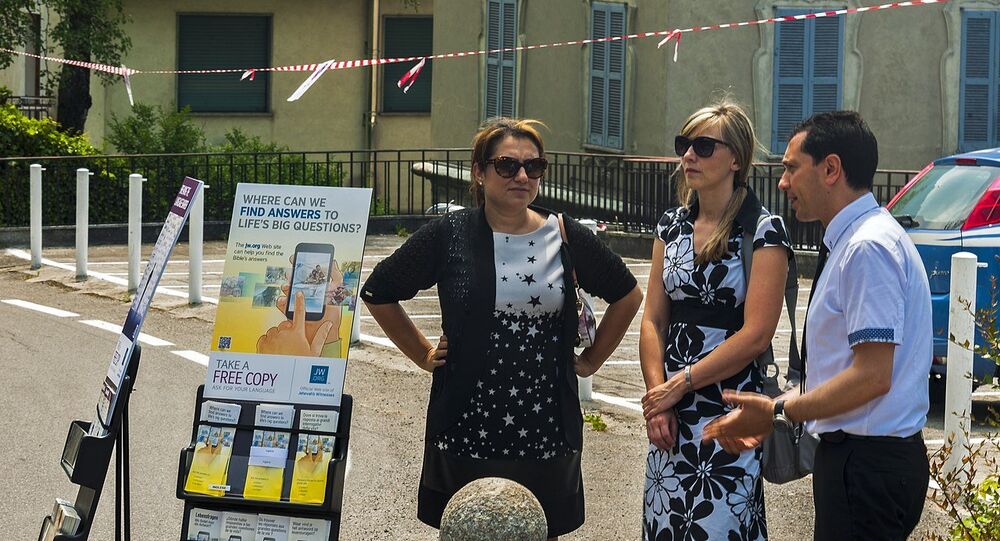 Banned in several countries, the Jehovah's Witnesses admittedly run a multi-million dollar film industry with the purpose of specifically reaching out to children.

Despite being convicted in a district court for showing films that have not been approved by the Swedish State Media Council, the Jehovah's Witnesses have continued their screenings at summer rallies. Several new police reports have been filed, Swedish national broadcaster SVT reported.

Screenings are a big part of the Jehovah's Witnesses' sermons and are often seen as a tool of indoctrination by the organisation's opponents.

“There is a very clear message in the films: you must not become like the evil ones, because they will be destroyed during the day of judgment. To hear that your classmates from school will die, because Jehovah will kill them, it does pretty much to a child, I think”, Sarah, a former witness, who left the organisation as a young teenager, told SVT. By her own admission, she is struggling to keep the witnesses' children protected.

One of the films features a mother admonishing her daughter, after the latter relates her school teacher's thoughts on family issues. “Everyone thinks differently about what is right and wrong. But the most important thing is what Jehovah thinks. He wants us to be his friends and live in paradise forever, but we must follow his rules to get there”, the mother says.

In April, a community leader was convicted by a district court for showing films that had not been reviewed by the State Media Council at a children's fair. The verdict was later appealed by the Jehovah's Witnesses, referring, among other things, to religious freedom and freedom of expression. The congregation continues showing the films in question at their meetings while awaiting a decision by the Court of Appeal.

Dag-Erik Kristoffersen, Jehovah's Witnesses press officer in Scandinavia has stressed that the organisation even “went beyond what is required” by having obtained a publication certificate from the Authority for Press, Radio and Television.

According to Nils Funcke, freedom of speech expert, the organisation interpreted the law incorrectly, since a review of the Media Council is obligatory for material aimed at children and to be shown in public.

Jehovah's Witnesses is a restorationist apocalyptic non-trinitarian offshoot from mainstream Christianity with headquarters in Warwick, New York. They believe that the destruction of the present world system at Armageddon is imminent, and that the establishment of God's kingdom over the Earth is the only solution for all problems faced by humanity. They are best known for their door-to-door preaching, distribution of literature and films, as well as refusing military service and blood transfusions. According to Peter Åkerbäck, a doctor of history of religion at Stockholm Univerisity, the organisation has several “sect-like” traits, such as the desire to exclude themselves from society.

The Swedish branch of Jehovah's Witnesses, active since 1909, is estimated at over 20,000. In total, the organisation has an estimated 8 million followers worldwide.

Its religious activities are banned in several countries, including Russia, China, and Vietnam.