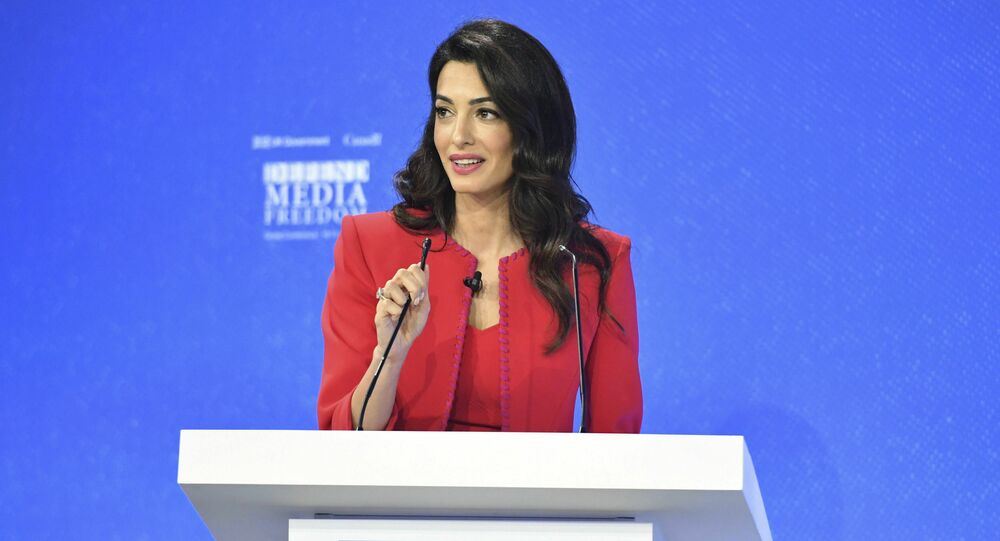 Assange spent almost seven years in the Ecuadorian Embassy in London where he had been seeking political asylum since 2012. After Ecuador revoked his asylum last year, he was arrested by British police in April 2019, in what the WikiLeaks founder has slammed as an “unlawful” move.

The UK Foreign Secretary’s special envoy Amal Clooney advised WikiLeaks founder Julian Assange on how to avoid arrest by British authorities and flee the country, according to a leaked document obtained by the Daily Mail.

The 29-page document was drawn up by the wife of Hollywood star George Clooney for Assange in September 2013, when she was the WikiLeaks founder’s lawyer.

In the paper, Amal Clooney specifically noted that Assange could argue that he had “rendered important services to Ecuador as an award-winning communications professional internationally known for his struggle for press freedom and human rights in general and [exposing] abuses of power in certain countries”.

“It may be legally possible for JA [Assange] to be appointed to an Ecuadorian ministerial or diplomatic post. This could give him immunity from arrest and right of passage out of the UK”, she claimed, arguing that Assange was “uniquely qualified” to become Ecuador’s technology minister.

She insisted that he would even be exempt from taxes if he agreed to take up a position as an Ecuadorian diplomat, according to the leaked document.

In April 2019, Assange was arrested by British police at the Ecuadorian Embassy in London, where he had been taking refuge since 2012 due to rape charges brought against him in Sweden.

Happy Birthday to Julian Assange, I hope he understands how much he is missed.

There is nothing on this planet that has inspired me more than WikiLeaks.

The press is not free. It’s sitting in a maximum security prison in London. pic.twitter.com/nxK67WZd1i

The Australian-born whistleblower denied those allegations and called them politically motivated. Despite the fact that Stockholm dropped the investigation in 2017, he was still wanted for breaking the conditions of his bail in the UK.

The 48-year old, who has become famous for leaking classified US government data, now faces extradition to the United States on 18 charges, including 17 counts of espionage and a single count of hacking into a Pentagon computer network, something that carries a cumulative prison sentence of up to 180 years.

Hearings on whether Assange should be handed over to the United States are set to begin next February.