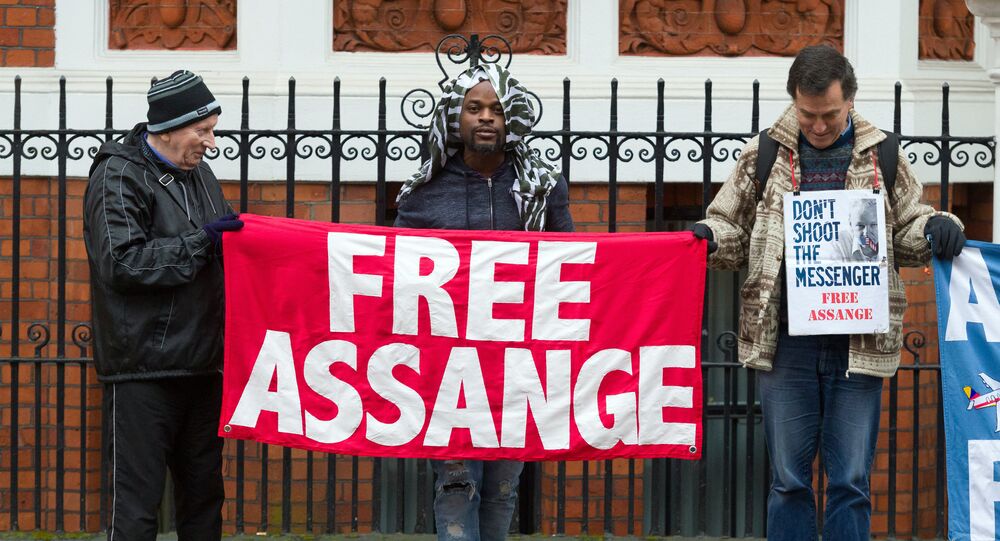 WikiLeaks founder Julian Assange was arrested in the Ecuadorian Embassy in London earlier in the day in what the whistleblowing website described as an illegal termination of his political asylum in violation of international law.

Ecuadorian President Lenin Moreno has confirmed on Twitter that his country has revoked Julian Assange's asylum over what he called "repeated violations of international conventions" and daily protocols, allowing UK police to arrest the world's most famous whistleblower at its London embassy.

In light of this nuclear news, Moreno's predecessor Rafael Correa, who agreed to grant Assange asylum back in 2012, took to social media to slam the president as "the greatest traitor in Ecuadorian and Latin American history" for allowing the British officers to arrest Assange.

TWEET: "The greatest traitor in Ecuadorian and Latin American history, Lenin Moreno, allowed the British police to enter our embassy in London to arrest Assange. Moreno is a corrupt man, but what he has done is a crime that humanity will never forget".

Another world-famous whistleblower, former NSA contractor Edward Snowden, described the arrest of Assange, who spent 7 years in the embassy, as a "dark moment for press freedom".

Images of Ecuador's ambassador inviting the UK's secret police into the embassy to drag a publisher of--like it or not--award-winning journalism out of the building are going to end up in the history books. Assange's critics may cheer, but this is a dark moment for press freedom. https://t.co/ys1AIdh2FP

Once the news broke, UK Foreign Secretary Jeremy Hunt thanked President Moreno for breaking the 7-year deadlock and tweeted that Assange is "no hero and no one is above the law".

He later stated that the UK is not "making any judgement" about the whisteblower's innocence or guilt, and his case will be decided by the "independent" British legal system.

UK junior Foreign Minister Alan Duncan, for his part, emphasised that Assange's health is the top priority and added that London does not extradite people to countries where they could face capital punishment, when asked about the whistleblower's potential extradition to the United States, where he is wanted for exposing a trove of classified materials on military ops.

"It is our broad policy in all circumstances, so it equally applies to Julian Assange, that he will not be extradited if he is going to face the death penalty. So that will apply to him", Duncan told Sky News.

Prime Minister Theresa May has joined Hunt in welcoming the news on Assange's arrest:

"I am sure that the whole House will welcome the news this morning that the Metropolitan Police have arrested Julian Assange for breach of bail, after nearly seven years in the Ecuadorian embassy. This goes to show that in the United Kingdom, no one is above the law", she told parliament.

Chief Spokesperson for the European Commission Margaritis Schinas, in turn, highlighted that the European Union will be following the case closely:

"As a general rule, we will not improvise a position on events that are unfolding… since we have taken the podium. We will be following closely, and we will come back to you if there is an EU angle. But we understand that this being a judicial European arrest warrant in case Sweden is also involved, this will be as you know, discussed many times here — a process in the hands of the judges. When judges speak, politicians should shut up. And executives, I would say", Schinas told reporters.

Sevim Dagdelen, a senior member of Germany's opposition party Die Linke, said in a statement that it was the German government's "duty" to stop the UK from extraditing Assange to the US "where he faces life imprisonment or even the death penalty for exposing US war crimes".

She blasted Ecuador's decision to revoke Assange's asylum and his subsequent arrest as a "scandal, a violation of international law, and at the same time a severe blow to independent journalism".

Dagdelen was supported by Sahra Wagenknecht, the parliamentary chairperson of Die Linke, who stressed that Assange cannot be extradited to the United States.

TWEET: "#Julian #Assange cannot be delivered to the #USA, the federal government must now work in this direction. Not those who expose war crimes belong in court, but those who commit them! #FreeAssange #ProtectJulian #Wikileaks".

Ex-Ecuadorian President Correa was not the only person to have called Moreno a "traitor": Jean-Luc Mélenchon, head of the French left-wing party La France insoumise, tweeted that France "must grant Assange asylum".

In his communique, Mélenchon wrote that "Assange acted for the cause of freedom and independence of France by revealing aggressive practices against us. The honour of our country must be to grant him political asylum at a time when his freedom is threatened".

Italy's Undersecretary of State for Foreign Affairs Manlio Di Stefano has called on its "British friends" to free Julian Assange.

TWEET: "After 7 years of unfair deprivation of liberty, Assange's arrest is a disturbing manifestation of intolerance towards those who promote transparency and freedom as #WikiLeaks. British friends, the world is watching you, Italy is watching you. Freedom for Assange"

TWEET: "Exploitation, injustice and privileges for the strong are possible only because they are based on lies. Therefore, if authorities — in Spain and in the world — are afraid of anything, then this is true. Freedom for Julian Assange".

In light of the arrest, the Swedish prosecution is considering reopening the probe into a woman's claim of having been sexually assaulted by Assange in 2010, Svenska Dagbladet reported. The chief prosecutor said that they were not able to take a position on the matter yet and will be closely monitoring developments.

"The hand of 'democracy' is squeezing the throat of freedom", she penned.

Bolivia's President Evo Morales has also condemned the arrest of the WikiLeaks chief on Twitter:

TWEET: "We strongly condemn the detention of Julian Assange and the violation of freedom of expression. Our solidarity is with this brother who is persecuted by the US government for bringing to light its violations of human rights, murders of civilians and diplomatic espionage".

Former Greek Finance Minister Yanis Varoufakis tweeted that the case against the WikiLeaks founder was “never about” Sweden: he was persecuted for “exposing war crimes”.

The game is up. Years of lies exposed. It was never about Sweden, Putin, Trump or Hillary. Assange was persecuted for exposing war crimes. Will those duped so far now stand with us in opposing his disappearance after a fake trial where his lawyers will not even now the charges?

Commenting on the breaking news, Australian Foreign Minister Marise Payne stated that the country is seeking consular access to Assange, who's an Australian citizen.

"Mr Assange will continue to receive the usual consular support from the Australian Government. Consular officers will seek to visit Mr Assange at his place of detention", she said, adding that she was "confident" that he "will receive due process in the legal proceedings he faces in the United Kingdom. As the matter is the subject of law enforcement and legal proceedings we will not provide ongoing comment".

© AP Photo / Sang Tan
Clockwatching: Timeline of Assange's 2,487 Days in Ecuador's Embassy in London
Assange, who rose to fame after leaking a number of classified documents on US military operations in Iraq and Afghanistan, found asylum in the Ecuadorian Embassy in London in 2012 when he tried to avoid prosecution by the Swedish authorities in two separate sex assault cases.

The WikiLeaks founder refuted the allegations as politically motivated since they followed the exposure of secret US docs. Even though the Swedish case against him was eventually dropped, he remained holed up at the embassy since he still risked arrest by UK police for breaching previous bail conditions and potential extradition to the United States.